Threats to Schools and a Question for Parents 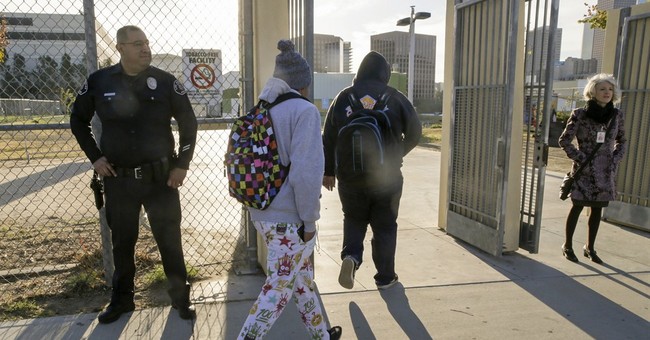 After breakfast you're about to put the kids on the bus when you hear about a note that threatens terrorism at your children's school.

Tuesday when the threats to school systems in New York City and Los Angeles came in.

So just choose between A and B. You could:

A) Tell the kids not to worry, it's probably just a hoax because the author seems to be illiterate, and this is real life, not "Homeland" on Showtime. And you have to get to work and really, there's no bleeping way that your kids will stay home alone playing video games and eating all the holiday salted cashews.

B) You keep the kids at home, which will cause you great inconvenience.

Don't answer as some politician covering his behind would answer at a news conference. Answer as a parent.

Just think of this as an internal conversation. So take a few moments alone, stare into a mirror and look deep into your own eyes and whisper to yourself what you'd do.

Based on a vague threat, would you send them to school? Would you keep them home?

If you're uncertain, then welcome to the club. You're probably just like the rest of us. You don't want to overreact either way, either with too much caution or too little prudence. But, as a parent, you also know that taking either approach has a cost.

I've seen some young parents pushing a stroller across the street so cautiously uptight that you think their spines might crack. I'd hate to think I was one of these, but then, truth be told, I was.

But then you see other parents, with seemingly no worries at all. They gab on their cellphones, completely unconcerned as they push the stroller.

And they nose that stroller with their babies inside right into traffic, gesturing while talking on the phone, intent on their important conversation.

Their heads aren't on a swivel. They're trustful, as if someone promised that all drivers that day would pay strict attention to the road. And that as long as they're pushing a stroller they'll have absolutely nothing to worry about.

Not all of us are as blissful. Some of us are tuned to uncertainty as we're confronted by real-life events of terrorism in our own country and abroad.

What makes it worse is our American leadership vacuum.

One extreme is President Barack Obama, so achingly tepid after the mass killings in San Bernardino that all he could talk about was how gun control would protect us, as if gun control in California -- which already has restrictive gun laws -- would have stopped the terrorists.

And he called what happened in Paris a "setback."

There is nothing of the leader in Obama's words.

But contrast President Politically Correct with the frightening bellicosity of Republican Donald Trump, demonizing all Muslims, promising to ban them from entry into the U.S.

If Obama is a soft, plastic glass of lukewarm tap water, then Trump is a brass cauldron of boiling duck fat. And neither inspires confidence.

Between them is reality, which came knocking again

Los Angeles public school officials said they'd received what they considered to be a "credible threat," and classes were canceled for more than 700,000 children.

New York officials received a similar threat, analyzed it, determined it to be incredible and sent the kids to school.

"There was nothing credible about the threat," Mayor Bill de Blasio said. "It was so outlandish."

The author of the note claimed to be a jihadist, but spelled "Allah" with a lowercase "a." This helped convince New York officials not to worry. Bratton said the author was mimicking the popular Showtime paranoia-fest "Homeland."

"I think the initiator, the instigator of the threat may be a 'Homeland' fan," Bratton said.

I'm a big fan of "Homeland" and its obsession with conspiracy and terror, and its cynical manipulation of fear, which is probably why the program is so darn popular. But I wouldn't use it as a baseline to analyze threats to public safety.

"It is very easy in hindsight to criticize a decision based on results that the deciders could have never known. I think it's irresponsible based on facts that have yet to be determined to criticize that decision at this point," Beck said. "All of us make tough choices. All of us have the same goal in mind: We want to keep our kids safe.

"Southern California has been through a lot in the past few weeks," Beck said, referencing the killings in San Bernardino. "Should we put our children through the same thing?"

So, as a parent, would you take that chance, or not?

It's the kind of thing that keeps parents awake at night, and, I imagine, presidents too.