Chicago: The Most Soviet of American Cities 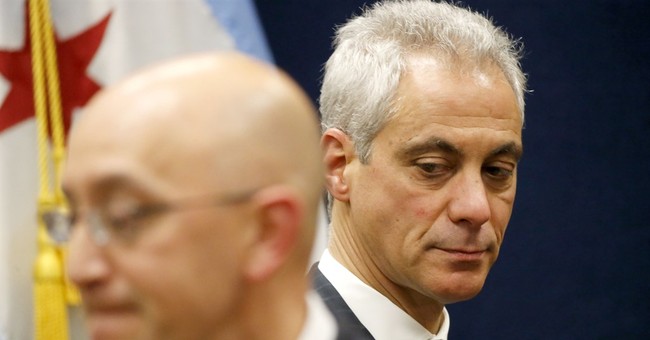 Chicago Mayor Rahm Emanuel -- the Democrat who suppressed a police video of a white cop killing a black teenager in order keep black votes and win re-election -- has a favorite saying.

"Chicago is the most American of American cities," Emanuel has said, repeatedly. "It's not just any city. If you want to come and see America, you come to its heartland. And what is the capital of that heartland? Chicago."

Politicians running for the office of emperor in a Republic just love fairy tales.

But there's one thing wrong with the mayor's favorite saying: It's wrong.

The people of Chicago know this and it's time the rest of the nation understands it, too.

Chicago may appear to be an American city. But it is actually run on the old Soviet model, where the people were bossed for generations by ruthless and cynical strongmen.

The Russians call them strongmen. In Chicago, we call them bosses. But strongman-boss, boss-strongman, what difference, at this point, does it make?

The strongman of Chicago rules by fear. He holds the terrible hammer of big government in his hand. And if you're a corporate titan or a corner shopkeeper, you don't want that hammer to strike you down.

The strongman also protects his power through routine purges of those close to him, lest they be tempted. Even slavish, abject loyalty can't protect them.

Just the other day, Chicago's strongman threw his burly police superintendent under the bus and pretended that he was sad.

In Chicago, just as in the old Soviet Union, history is constantly rewritten by the central authority to support appealing, government-approved myths.

Unfortunately, these fairy tales have little to do with wrinkled old crones like the witch Baba Yaga who lives in a rude hut. And that hut is perched upon giant chicken's legs.

Chicago's new fairy tale is that the strongman is all about transparent and open government. Oh, and the reason he put those speed and red light cameras all over the city isn't about squeezing revenue from taxpayers.

All of this is accomplished in a one-party state, where a central committee controls things, from the substandard public schools to who gets to wear the black robes of impartiality and become a judge.

So Chicago is all very Soviet in its ways, except for pithy sayings. I looked up "Russian sayings" on Google and I can't understand them.

"It was happening -- a goat was eating up a wolf," was one, but who knows what the heck that means.

That's more like it. Little Chicago aldermen often go to prison. And four Illinois governors have gone to prison. But no Chicago mayor has ever been indicted.

But Rahm doesn't need money. He's got millions. What he needs now is love, but he lost his chance at that. He's not even likable.

I told him years ago, but he wouldn't listen. He loved playing his ruthless games, mocking people, always on the intrigue, one-upping folks, playing the tough guy in public.

The danger for the mayor is that his support in Chicago is about a quarter-inch deep. He's like some weed in a crack in the sidewalk. There are no roots to hold this man.

Because after playing African-American politicians and ministers for fools with that Laquan McDonald video, I don't see how the national stage can be open to him. The national media once kissed his hand as if he were a pasha. No more.

Yes, another new police shooting video is expected to be released of another victim, and now Hillary has called for federal investigations of Rahm's police department. Even Bernie Sanders, appealing to that same African-American unrest, is demanding a federal probe.

Hillary and Bernie understand arithmetic. African-American politicians supported Rahm. And he kept that McDonald video under wraps until after his re-election. Without black votes, there can be no Democratic Party.

President Obama has been able to skate away on this, and has avoided taking some kind of stand. But avoiding real conflict has always been his way.

Rahm is a different creature. He craves conflict. But after what he's done, he can't ask African-Americans to support him again.

Emanuel still has his hands on the levers of power, but these days, with that other video coming out and the Chicago Teachers Union moving toward a strike, the mayor of Chicago is not the Great and Powerful Rahm.

Whether it was his penchant for secrecy and plots and arrogance, Chicago has finally seen what's behind the curtain.

And it isn't some terrible strongman or boss with a big voice.

It's just a little guy on borrowed time.