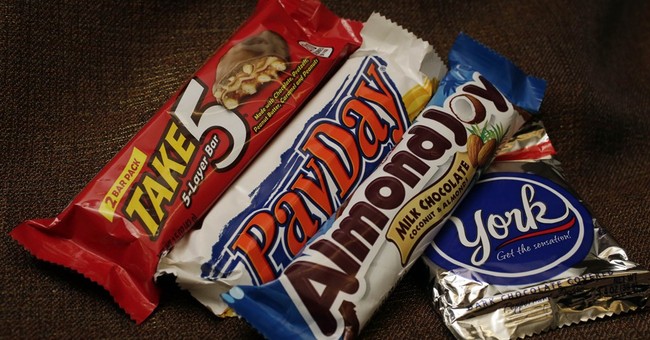 Americans rushing out to buy Halloween candy for trick-or-treaters should know about the new Federal Halloween Candy Law:

Any person who, on Halloween, knowingly gives out candy corn or Bit-O-Honey or Mary Janes -- which resemble fossilized space alien baby turds wrapped in orange or black waxed paper -- shall be thrown into a rat pit, alone. With rats.

And there, they shall fight for their lives in the darkness, until their last screams fade away. And the foreheads of their descendants shall be branded with the words "Crap Candy Givers," so that their seed shall be known throughout the land.

OK, yes, I made up the forehead branding part. No one wants to brand the foreheads of the seed of crap candy givers, including me.

But the rat pit part of the Federal Halloween Candy Law is absolutely true. If you don't believe me, just visit your local police station, walk right up to the desk sergeant and, in a very loud voice while waving your arms, demand to see the rat pit. If the sergeant says there isn't a rat pit, tell the sergeant you know that there is one in the basement and that police must show you, immediately. Keep yelling until they give in. You'll see.

"You're seriously hating on my two favorites!" said candy corn lover Joanne Kalin on Facebook. "I love the peanut butter kisses in the waxy paper. I look all over for them at this time of year!"

Well, I hope you like the rat pit, Joanne, because if you're caught handing out candy corn or Bit-O-Honeys, or Mary Janes, I'll lower you in there myself.

There is Good Candy, which means anything chocolate or chocolate with peanut butter (yeah, you know the ones), and Sour Patch Kids, Nerds and the excellent nonpareil Sno-Caps, the choice of distinguished movie buffs. This is good candy.

And then there's the bad candy.

There are several subcategories of bad candy. Here are but a few:

-- Healthy Candy, meaning it's not really candy. Raisins aren't candy, neither are bags of kale chips or that bizarre raisin-cranberry hybrid known as Craisins. Oddly, many who give out "Healthy Candy" also believe that windmills and solar panels and "something they'll invent" will provide for most of our energy needs in years to come.

-- Grandma Candy is anything your grandma likes, including those caramel rolls with the white stuff in the middle that you suck out before spitting the rest away. And any hard candy wrapped in cellophane from 1962 that Grandma says tastes just like watermelon when she was a girl. The wrappers stick to half of the candy, and you can't peel them away. And Good & Plenty. They suck, and Grandma likes them, but no one else does except for a guy I know named George.

-- Stupid Candy, like wax candy lips. They're not even candy! Who in the name of heaven would slip a pair of red wax lips into a kid's Halloween bag? A demon, that's who.

And what is a kid supposed to do with wax lips? If you can remember without retching, the whole kid vs. wax lips experience lasts about three seconds. Then you start gagging and spit them out in your mom's hand. And she can't find a garbage can because you're out trick-or-treating in the middle of the block and your little brother starts whining that he has to go.

So she's forced to slip the freshly salivated wax lips into her pocket or purse and wipe her hands on her slacks, if she has no tissue. And if that's not stupid, what is?

"Rolls of mints purchased from the Lions Club," Lori Brazil Gery said. "No kidding -- we've got that on our block. It's like getting Rolaids for Halloween."

Candy that resembles Rolaids is not candy. It's a motive.

"Bit-O-Honey is one of my favorites!" said Tracy Robert Lieberman. "Candy corn is a Halloween necessity -- for about three pieces. If we're talking the worst candy, I nominate peppermint disks ('cause we all know the grandma kindly handing them out has had them since last Christmas), Skittles, which taste like wax (along with Laffy Taffys), and also Nerds, which just suck."

No, Nerds do not suck. Not the purple ones.

One nice mom gives out Halloween gifts, rather than candy. Last year she gave out pencils.

"I didn't want to give candy, but pencils are nice," she said. "Every child needs a pencil."

Yes, that's thoughtful. But every kid needs to know what's coming, too. So if she gives out pencils, I should feel free to give out copies of "The Road to Serfdom" by F.A. Hayek.

The problem with that is that they're kids. They want candy. And the way things are going in this country, by the time they're grown they'll know all about being serfs. Besides, our current domestic policy is that giving candy is much better.

One fellow said that when he was in college, he didn't give out Halloween candy.

"I'd give bouillon cubes to kids," he said. "I just took them from my mom's cabinet. They're wrapped in foil, so they look like candy. Yeah, that was great!"