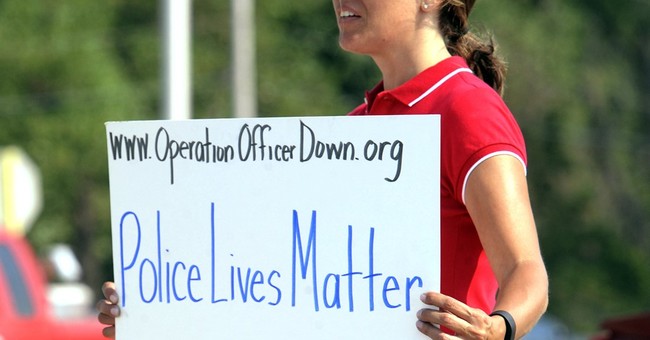 The killing of Fox Lake, Illinois, police Lt. Charles Joseph Gliniewicz had nothing to do with our hashtag politics about which lives matter.

Gliniewicz, whose body was found in a marshy area near Fox Lake, was just a cop who'd been doing his job.

And he was killed for it, left stripped of his gear. He was the 24th police officer shot to death in the U.S. so far this year.

Gliniewicz was no rookie. He had more than 30 years on the job. "He's got four sons who are going to have to go on alone," his mother-in-law, Terry Resetar, told the Tribune on Tuesday, just hours after Gliniewicz was killed.

If you've been following the news, you know about the killing of the police officer in suburban Chicago.

National TV news was full of the manhunt for the three suspects, images of police dogs on the ground and helicopters in the air and SWAT teams fanning out.

But now, when a police officer is killed, for whatever reason, it is set against a larger context of anger and seething politics; of police shootings, and dead minorities, some unarmed when they were killed, and of dead cops shot down simply for wearing their uniforms.

And while many follow these as tragedies, or as provocative commentaries on our politics, there is a group that is too often forgotten, or ignored.

They're the people who don't make waves. They're not good at angry identity politics. They don't protest. Yet they have a deep and elemental connection to all this too.

And there isn't a police family in America that didn't take note of what happened in Fox Lake, just as they took notice last week when Harris County, Texas, Deputy Sheriff Darren Goforth was shot and killed in an ambush while pumping gas into his patrol car.

"You want to consider the facts and take the politics out of it, but if you're police or from a police family, you can't help but thinking that it's open season on us," said longtime Chicago police Lt. Joseph Schmit, who has two sons on the job.

Schmit recently retired from the Chicago Police Department after 36 years on the job, the last 18 or so as a lieutenant. He is a third-generation police officer.

His two sons are fourth-generation cops in Chicago. They're not bureaucrats. They're the real police, making arrests, one working the South Side, the other on the West Side.

"They're young. They're proud of their work. I'm proud of them," Schmit said. "And they text more than talk to their father on the phone, and I don't want to dwell on their safety.

"But sometimes when the phone rings, I can't help thinking: Is this the call that changes my life forever?"

In 2011, there were 87 police officers killed in the U.S., and 59 were slain last year. But it's not just the numbers of officers killed on duty that bothers police families.

It's the politics. Many feel isolated, particularly those who work in metropolitan police forces, because they're often left to dangle between the whims of the politicians desperate for votes, and the anger of some neighborhoods where violence and brutality are all too common.

"It's always been simmering out there but in the last year or so it's just exploded," said Schmit. "If you watch the news ... you can get the feeling that police are just desperate to pull the trigger.

"You show up at a roll call and you see how young they are, how very young they are," he said. "They're kids wanting to do a good job for the public.

"And these kids don't get up in the morning saying 'I'm going to kill a black man,' or 'I'm going to violate someone's civil rights today.' A police officer just wants to do his job well and get home, but all the politics overwhelm that."

And nowhere has the politics been felt more acutely than in morale, he said.

"I think it's everywhere now. In every big city, at least. As a supervisor, the most difficult thing was to motivate, what with all this crazed anti-police sentiment out there in the public," he said. "The hard thing is to get them to do it. I'm not talking about being overly aggressive. I'm talking about being proactive, to take initiative. But there's risk in that."

It's not about risk to their bodies alone. Police are action-oriented, but what freezes them isn't physical fear as much as it is the risk to their careers.

Yet there's an alternative to risk that isn't discussed enough.

Just sit in the car, don't profile anyone, not even that little white girl with the ponytail in her daddy's BMW with some suburban sticker on the windshield as she waits on a known drug corner.

"If you let things go by, and do your shift and go home, you know what happens? You don't have any worries," Schmit said.

"You don't have to get deposed by city lawyers, or have someone turn a cellphone on you and see your life become a political drama. And the people should understand that, understand what's going on inside their heads."

There is no such thing as a two-dimensional life, or death, even though our hashtag mentality oversimplifies most everything.

But it is true that all lives matter. All of them.

And that means police lives matter too.