After Stephanopoulos, I am Boycotting All the Talking Heads 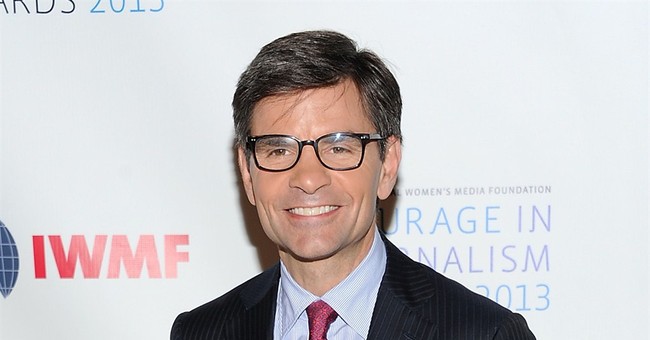 Some of you are probably done with ABC News over the George Stephanopoulos embarrassment.

Of course, you wouldn't be wrong to boycott ABC News. You might be a fool not to.

If you have any pretension to intellectual honesty, you either boycott ABC News over this Stephanopoulos mess, or you take a pair of hairy donkey ears and pin them to your temples.

It's possible that you wish to keep on watching the ethically challenged ABC News but you'd really like to skip the hassle of searching for authentic hairy donkey ears.

In that case just wear a kilt, a tartan, like the kind former President Bill Clinton might wear as "First Laddie" of the United States, should his wife be elected our president and he's left to milk their cash cow, the Clinton Foundation.

Or better yet, if you really, really want to watch ABC News, then paste a Planet Hillary photo to your forehead, like the one from the New York Times magazine a while back.

The ABC News promotions department should be able to print up a few million of these: a gigantic orbiting Hillary head floating in space, kind of like Mrs. Moon but it's Hillary, with a wry grin, stars twinkling, perfect for posters.

But I'd really like to take that ABC News boycott notion a step further.

Why boycott just ABC News? Why not boycott all American TV news? You think you'll miss something important?

What do you get for watching TV news anyway besides a gnawing sense that you're being manipulated by Machiavellis? Nothing.

So try my experiment. I've decided to take a break from TV news -- cable and network -- and spend that extra time reading, tending my tomatoes, having conversations with my loved ones, and drinking whiskey.

I don't have a problem with panel discussion programs -- the kind on CSPAN, where panelists have much gravitas -- but I'm sick of glitzy network and cable scream fests.

I just can't take the emoting of the anchors, their posing and pouting, their head shaking and other broad pantomimes.

And forgive me, but I really don't think they need to slap on more lip gloss to tell me, breathlessly, about more ISIS beheadings.

So I'm gone. If it's not sports, or a big-budget medieval fantasy drama about dragons and a profoundly heroic yet sarcastic dwarf who visits bordellos and gets kidnapped by a disgraced knight seeking to win back favor of his queen, then I'm not interested.

Of course that goes for FOX News, which has become the Jeb Bush Republican Neocon Establishment Network, along with high frequencies of female anchor thigh display.

But it also goes for all the other broadcast and cable shops. They serve as Democratic Establishment News, priming voters in the class wars, especially the turgid left's show pony, Al Sharpton.

I have friends who are TV reporters and I'll go online to see their stories. Some do excellent and even dangerous work. But I just can't stand American TV news divas and Republican and Democratic operatives masquerading as journalists, spinning, spinning, spinning.

So I'll read to get my news, or listen, or go on the Internet for copy and video but I won't waste time on a creaky old news show. Certainly some will say this is all self-serving. Others will no doubt skewer me if I'm invited to appear on a news program. But don't worry. I promise not to watch.

And I may disclose someday that, yes, I once boycotted TV news in the summer of 2015 but have since "evolved."

But he's not a journalist. He's a spinner, a former top Bill Clinton staffer.

And while skewering former Republican operative and "Clinton Cash" author Peter Schweizer about the Clinton Foundation and pay-to-play allegations, Stephanopoulos omitted something.

He didn't disclose to his audience the fact that he'd donated $75,000 to the Clinton Foundation.

Instead, Stephanopoulos defended Hillary Clinton rather vigorously, insisting the former U.S. Secretary of State was being tarred for no good reason.

SCHWEIZER: "No we don't have direct evidence but it warrants further investigation because again, George, this is part of the broader pattern. You either have to come to the conclusion that these are all coincidences or something else is afoot."

STEPHANOPOULOS: "And that is what the Clintons do say, it's coincidence, they say you have produced no evidence and I still haven't heard any direct evidence and you just said you have no evidence that she intervened here. But I do want to ask a broader question: It's been reported that you've briefed several Republicans on the Senate Foreign Relations committee, including the chairman, Bob Corker. Did you offer any briefings to Democrats?

SCHWEIZER: No, but I'd be glad to brief them before the book's released.

It went on like this for several painful minutes. If Stephanopoulos had disclosed his gift to the Clinton Foundation, the discussion would be about his bias, and remain political.

But he didn't disclose. And so, his news organization tells us not to bother with their ethical issues.

Stephanopoulos later apologized for not disclosing his contributions. ABC News congratulated him and left it at that.

I'll leave it at that too.