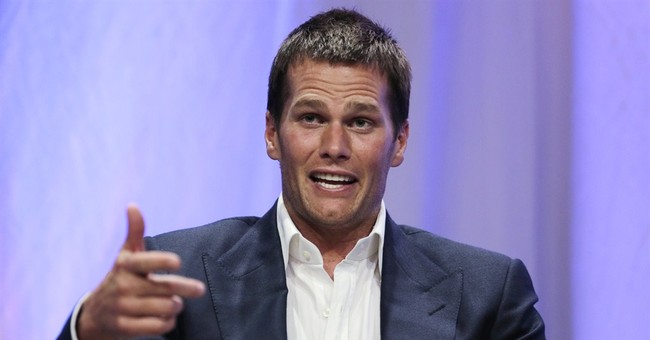 I'm not much of a Tom Brady hater or a New England Patriots detester, but it's clear the haters have lined up to vent their spleens.

It's all about Deflategate, a rather ridiculous name for a cheating scandal involving the credibility of the multibillion-dollar NFL, the iconic pretty-boy star quarterback and those deflated balls.

Some sports moralists seem obsessed with Brady's supermodel wife, and many stories about Deflategate reference the wife's stunning beauty and their lovely children and Brady's own rather handsome mug, which my wife and just about every other grown woman in America thinks is cute.

If the lovely Mrs. Brady had bad teeth and a face that resembled a dump truck made entirely of meat, I doubt that her looks would be an issue.

Still, it it's not difficult to pick up the resentment: It's irritating to see the Bradys' smiles, the star quarterback and the lovely wife looking like those perfect alpha couples you hated in college, or perhaps like two tiny figures on top of the NFL cake.

Money, riches, his and her dimples, fame, mansions, luxury cars, it doesn't seem fair when others get it all and we don't.

So here's my sports fan question. And then I'll hang up and listen to comments:

What's the difference between Brady and the Patriots and that team of Little Leaguers from the South Side of Chicago?

The Jackie Robinson West All-Stars, remember them? They were America's darlings at last year's Little League World Series, a team of African-American kids with talent and class, a team surrounded by love, from their parents, coaches, neighbors.

And when they played ball, people all over the country -- and not just baseball fans -- stopped what they were doing to tune in on TV.

They're just kids who love baseball.

But there are rules in Little League, including an important one about residency. A player must live within the boundaries of the team.

Sadly, politicians from Chicago and a reverend or two played the race card and the victim card and pandered for black support. And some adults close to JRW also fueled a similar kind of speculation. It was pathetic.

But most Americans figured, properly, that rules are rules. JRW was stripped of its title, and some of us thought the kids were learning a valuable but painful lesson.

Which brings me to the Patriots, champions of the NFL, a league that prides itself on offering role models to the country.

Were the Patriots stripped of their title as were the kids from Chicago?

The balls were deflated before the AFC championship game, and the league's investigation pointed a finger at the equipment men, Jim "The Deflator" McNally and equipment assistant John Jastremski.

The Patriots have been fined $1 million and two draft choices, and Brady has been suspended for four games.

And Ted Wells, the lawyer who investigated the scandal for the NFL, said Tuesday that he found direct -- not merely circumstantial evidence -- that Brady knew the team employees were deflating footballs in violation of NFL rules.

"What drove the decision in this report is one thing: It was the evidence. I could not ethically ignore the import and relevancy of those text messages and other evidence," Wells told reporters in a conference call.

The text messages, he said, referred to texts between the equipment men suggesting Brady knew what was planned for the AFC title game with the Indianapolis Colts.

The equipment men rushed into a restroom before the game and, in a little over a minute, deflated the Patriots' game balls to Brady's specifications.

Are Brady's fingers so weak that he's in such need of soft, grippable balls? Or perhaps his running backs and receivers find it easier to hold on to and not fumble the squishier balls? Either way, the NFL does not allow deflated balls. It's cheating.

Back then, Brady's team whipped the Colts 45-7. And the Colts complained to the NFL, but the NFL shut up and the Patriots played Seattle in the Super Bowl and won.

You might tell me that Jackie Robinson West played a kids game and the NFL is big business, and that it's a stretch to mix the two.

Already, the NFL apologists are out, saying that what happened is more like chicanery than cheating, and that a little craftiness is desirable.

But sports isn't sold as politics. It's not about sleek guys from K Street writing laws for lazy, compromised politicians about winners and losers.

Sports, we're told, is about fairness, it's about meritocracy, where the best players succeed and are celebrated and their efforts are protected by rules.

If the NFL actually did care about fairness, it would have stripped the Patriots of the AFC title and had the Colts play the Seahawks in the Super Bowl.

But that didn't happen. And all this drama is about covering the NFL's behind.

When we expect more of our children than we do from champion athletes, then we're sending the kids, and the country, a confusing message:

You ready for that?