John Kass: Are Political Winds of Change Blowing In Chicago? 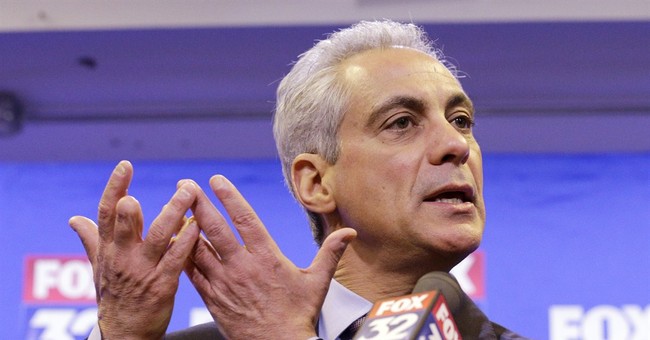 The oligarchs who run Chicago don't want to consider the unthinkable -- at least not publicly.

Yet as the campaign for mayor of Chicago between Cook County Commissioner Jesus "Chuy" Garcia and Mayor Rahm Emanuel enters its final week, some oligarchs are worried.

They're probably wondering: What if Rahm really loses this thing?

If Rahm isn't around to carry the city on his shoulders, will Chicago just slide into the lake?

"The citizens of Chicago have not weighed in on this," Garcia said. "They haven't been asked. You don't make those decisions by fiat. You are not king of the city."

Isn't being King of the City what this is all about?

And what of the Greater Oligarchia -- those Rahmulan strongholds of Lincoln Park and the Gold Coast?

Will they suffer a mass epidemic of mustachiophobia, and shout, "Run for your lives!!!" every time they see a mustachioed man?

According to the polls Rahm is ahead, but I have a feeling that it will be much closer than the Rahmulans, or their spinners, want to admit.

So if Rahm does lose, will we see a return to Council Wars?

"If Chuy gets in, there's a whole different scenario out there," said Chicago Ald. Nick Sposato. "You might see something like Council Wars, the old guard might come after him. Chicago was supposed to have a strong-council, weak-mayor form of government. But usually, it works out the other way."

Of course Rahm could win re-election. He's raised tens of millions of dollars. It seems like not a day goes by without the mayor holding an event with African-American ministers, whom he hopes will get out the vote.

So if he wins?

"He'll have millions of dollars and fear of nothing and a list of people who made him angry," said a senior Democrat. "He can close 100 schools. He can do what he wants. Who is going to stop him?"

Rahm will then rely on his wine buddy, Republican Gov. Bruce Rauner in Springfield, as an ally, along with Speaker of the House Michael Madigan.

And he'll demand rubber stamps in the City Council.

"But no matter what happens with the mayor, the City Council will be different," Sposato said. "Being a rubber stamp isn't popular in Chicago."

Sposato isn't a rubber stamp. He defeated the old 36th Ward Democratic organization -- once controlled by guys like former state Sen. James DeLeo. Forgotten by many is that DeLeo, who had been committeeman of the 5th Congressional District, was a key player in sending Rahm to Congress.

After Sposato became alderman, the old 36th was magically remapped out of existence. Sposato ran and won in the newly drawn 38th Ward. And in the new 36th, there is a great campaign, between forces old and new:

Gilbert Villegas, a former Marine and business consultant endorsed by Sposato, Garcia, U.S. Rep. Luis Gutierrez and by the Tribune.

Aquino has also been endorsed by Cook County Board President Toni Preckwinkle, who once cast herself as a progressive independent but now cozies up to Boss Berrios, the Cook County assessor.

Aquino is the son of another Berrios guy, Streets and Sanitation division Superintendent William Aquino.

Berrios is desperately trying to hold on to the Northwest Side. His guy Suarez is in trouble in the 31st Ward. Berrios' daughter, Toni, for whom Aquino worked, lost her state representative seat to liberal Democrat Will Guzzardi last year.

Naturally, the campaign to save Aquino has brought out all manner of old-style tough guys, the ones I remember from years ago. I can still smell the Paco Rabanne and see the glint of gold around their necks.

I called Aquino's office and left messages, but no one returned my calls. But Villegas did.

"This is just a demonstration that my opponent is part of the old machine," Villegas said. "And the old 36th Ward guys are coming to Aquino's rescue to make sure Papa Joe (Berrios) keeps that seat."

"This is 2015," Villegas said. "The mayor's in a runoff, and political bossism is going by the wayside."

Across the city in the 11th Ward hereditary fief of the Daleys, things are different.

The Daleys, who've spent most of the past 100 years eating from the public trough, are pushing another of their princes forward, Patrick Daley Thompson, a lawyer and Water Reclamation District commissioner who is endorsed by the Tribune.

"I think people have had enough of it, you know?" Kozlar said, blaming the ward's troubles on "the politicians and leaders who've had a grasp over our city for the last 30-plus years."

The Daleys understand power. So does Emanuel. And if he wins, he'll have a grasp on Chicago all right. He'll grasp Chicago as long as he wants.

The first thing he'll do?

I figure he'll burn that cozy sweater he wore in his famous Cuddly Rahm TV commercial, the one in which he apologized for being so forceful.

One week to go.