'The Ox-Bow Incident,' Ferguson and the Rule of Law 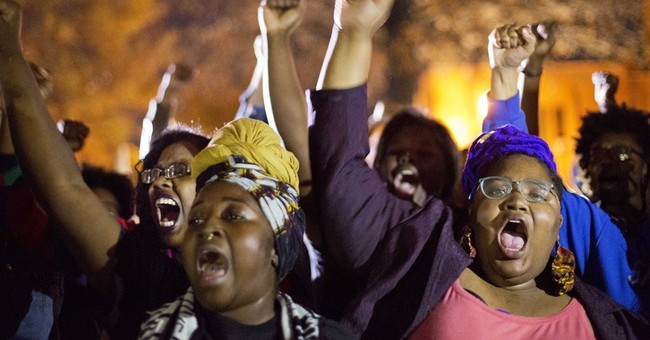 It's positively ancient, and it's easy to see why it's been forgotten. For one thing, it's in black-and-white. And it offers no eye candy: no explosions or moaning flesh, or fast cars or epic battles.

But I've been thinking about it lately, especially now, with what's going on in Missouri, in Ferguson and in St. Louis.

"The Ox-Bow Incident" is a film of a novel that speaks to the rule of law. And it admonishes us against mob rule, the kind that turns men into a lynch mob.

Or -- and this is taken from the latest news -- the kind of ugly passion that might have led to a man being beaten to death with hammers in St. Louis.

It starred the great Hollywood actor (and liberal) Henry Fonda, although I wonder how liberal he'd be on today's sliding scale.

Unfortunately, I figure it's been forgotten by our politicians in Washington and most certainly by the hustlers swooping into Ferguson, eager to leverage pain for power.

"The Ox-Bow Incident" involves a posse of cowboys who lynch the wrong men. It came out in 1943. So it was already old when I was born. But we'd see it on late-night TV -- with commercials -- and then later we'd watch it in high school.

And it was twinned with our learning of the civil rights movement, serving us as a guide for behavior.

As the son of immigrants, and desperate to become what I thought of as a true American (and to move past the blood feuds of the old country), I revered it.
CARTOONS | AF Branco
View Cartoon

Because it taught me what was expected of Americans, not merely American power and what we used to call American ingenuity, but also of American restraint.

Brown was immediately cast as a victim, although we learned later that he was also something of a thug.

Being a thug and stealing cigars from a corner store isn't reason enough to be killed by police. But punching a cop and going for his gun is a different matter.

And when a grand jury did not find enough evidence to rule there was probable cause to indict police Officer Darren Wilson, you saw what happened:

Fires and looting, violence and the slogan, "No Justice, No Peace."

What does that mean, exactly, "No Justice, No Peace"?

It means that activists like Al Sharpton, the race hustler now embraced by President Barack Obama, wanted Wilson punished. Or else.

Wilson was punched by Brown. They struggled for Wilson's gun. If the cop had lost his gun in that struggle, is there a chance that it could have been used on him?

The widows of slain police officers would tell us so, if we were inclined to hear them.

Is that to say there are no legitimate grievances in predominantly black towns like Ferguson, or others across the country?

Maybe that's why five St. Louis Rams -- all African-American -- walked out onto the football field the other day raising their arms up in the air as Brown was supposed to have done, in that "Don't Shoot" pose. Yet we know now it didn't happen that way. The witness who launched that hand-waving imagery has been discredited. But facts don't matter when restraint is gone.

And that brings me to the hammer attack. A few days ago, a group of teenagers -- including two African-Americans and one Hispanic -- confronted Bosnian immigrant Zemir Begic in St. Louis.

Words were exchanged. They allegedly beat him to death in front of his wife.

Within hours, St. Louis police Chief Sam Dotson rushed to tell the large Bosnian community there it was no hate crime.

"There is no indication that the gentleman ... was targeted because he was Bosnian," Dotson said.

Not targeted for being a Bosnian? Really? As if thugs who'd use hammers to kill a man could find Bosnia on a map.

Akif Cogo, the head of a St. Louis Bosnian group, told us Tuesday that many local Bosnians feel they've been targeted. Many believe it was a hate crime and Bosnians, Serbs and Croatians have all seen such hate up close.

"People are scared," he said. "They're not sure what the next step the community needs to take to protect itself."

What they need is not only the law but what's behind it. In "The Ox-Bow Incident," the cowboy Gil, as played by Fonda, reads a letter from the innocent man the posse has just lynched.

It is a letter from the victim to his wife.

"Law is a lot more than words you put in a book, or judges or lawyers or sheriffs you hire to carry it out. It's everything people ever have found out about justice and what's right and wrong. It's the very conscience of humanity. There can't be any such thing as civilization unless people have a conscience, because if people touch God anywhere, where is it except through their conscience?"

But power politics has always has been about force. There is no conscience to it. And there is no restraint. And once we give in to it, we become brutes.