John Hawkins
|
Posted: Apr 28, 2018 12:01 AM
Share   Tweet
The opinions expressed by columnists are their own and do not necessarily represent the views of Townhall.com. 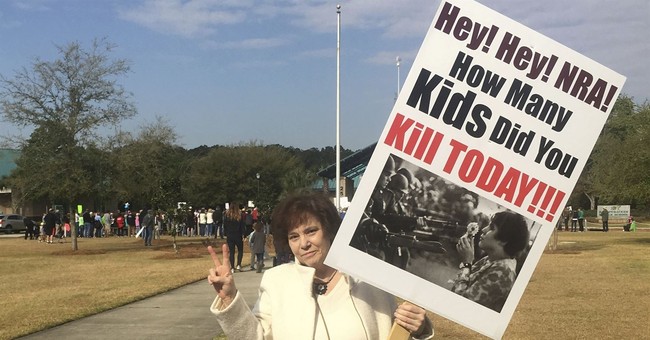 Every time there is a mass shooting we get the same old song and dance from the gun control fanatics. You’re sorry this happened? Then you must institute gun control. Oh, you don’t want to do that? Then it’s your fault that it happened. The NRA is bad. They kill people. We must have gun control. Innocent law-abiding Americans are responsible. Don’t you feel bad for the victims? Then institute our gun control agenda that will do nothing to stop the killings. It’s hamhanded, relentless propaganda peddled by smug, self-righteous anti-gun zealots.

Well, here are some things you don’t typically see those anti-gun nuts mention when they demand that we disarm the whole country because some crazy murdered people.

1) Some of the worst mass murders didn’t use guns: The worst mass murder on American soil was 9/11 which featured terrorists turning planes into weapons and 2,996 people. Then there was the Oklahoma City Bombing which used explosives and cost the lives of 168. One of the largest mass murders and worst at a school was the Bath School Disaster in 1927 which used dynamite/pyrotol to achieve a 44 person body count. In 1962 a man committed suicide via dynamite ON A PLANE. Forty five people died when it went down. In the 2016 Nice attack in France, 86 people were killed with a large cargo truck. In 2016 in Japan, 19 people were even killed with a knife. The idea that these sort of killings are impossible without guns just isn’t true.

2) America is not the only country with this problem: Mass shootings happen all over the world and if you account for the POPULATION DIFFERENCE between the United States and smaller nations, we’re not even one of the countries with the worst problem,

But a study of global mass-shooting incidents from 2009 to 2015 by the Crime Prevention Research Center, headed by economist John Lott, shows the U.S. doesn't lead the world in mass shootings. In fact, it doesn't even make the top 10, when measured by death rate per million population from mass public shootings.

The idea that this only happens here just isn’t true.

3) These shooters are all white guys: There’s a long running myth about mass murderers (and for that matter, serial killers) that says they’re almost all white guys. This isn’t correct as even Slate magazine noted in a rare moment of honesty,

4) Mass shootings are much more rare than gun control advocates would have you believe: If it bleeds, it leads and the bloodier the better. That means mass shootings get ENORMOUS amounts of publicity every time they happen and if you believe gun control nuts, they happen constantly. But, what are the chances you are actually going to die in a mass shooting? Well, in an anti-gun article in the Washington Post from April of this year, it was noted that 1,081 people had died in mass shootings from 1966 to the present. In other words, roughly 21 people per year died in mass shootings over the last 52 years. Just as a point of comparison, almost one American per day (335 per year) drowns in a bathtub, hot tub or spa.  In 2016, according to the FBI Uniform Crime Report, 656 people were beaten to death with “hands, fists, feet, etc.” If the mainstream media obsessively focused on stories like these, we’d have people calling for bans on bathtubs and martial arts training. The death of any innocent person is a terrible thing, but the number of deaths via mass shootings doesn’t justify 1/50 of the attention it’s given in a nation of 325 million people.

According to the FBI, rifles of all kinds accounted for just 3 percent of firearm homicides in 2016, while handguns accounted for 65 percent. Contrary to what you may have heard, handguns are also by far the most common choice for mass shooters. A Mother Jones review of mass shootings from 1982 through 2012 found that 66 percent of the weapons were handguns, while just 14 percent would qualify as "assault weapons" under the definition used in a 2013 bill sponsored by Sen. Dianne Feinstein (D-Calif.). More recent data show a similar pattern.

When the only idea gun control zealots are willing to entertain to stop mass killings is *** surprise *** gun control and the majority of weapons used in those killings are handguns, it doesn’t take a lot of effort to see that their real agenda is to disarm America.