Bringing Even 10,000 Syrian Migrants To America Is A Mistake 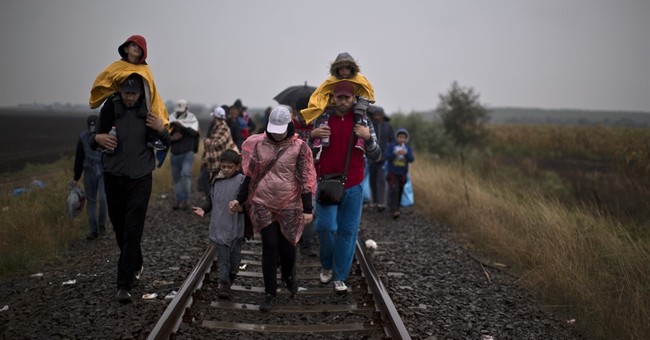 As millions of Syrian migrants stream into Europe, the Obama Administration has announced that the United States will be taking in 10,000 refugees.

That is a mistake.

Of course, that mistake could get a lot worse before it’s over. Democrats are already calling for a massive increase in those numbers. Dick Durbin, among others, has called for us to take in another 65,000 refugees. There were initial reports that John Kerry called for us to take in 100,000 migrants behind closed doors, but when that went public, he denied it and indicated the number would probably be closer to another 30,000. Given that Germany is promising to take in 800,000 migrants this year and 500,000 a year afterwards, the pressure will be on for America to dramatically increase the number of Syrians we take in.

Granted, there are probably some wonderful people in Syria, just as there are terrific people in every nation who could add to America. If they were applying for citizenship, it would certainly make sense to consider them on a case-by-case basis.

On the other hand, if we were picking nations to recruit new Americans from, Syria would be pretty close to the bottom of the list. People speak Arabic there, not English. Although the country has theoretically been a republic since 2012, as a practical matter it’s a dictatorship. So, the people of Syria have little experience with democracy, freedom of the press or the rule of law. Although about 10% of the population is Christian, most Syrians are Muslims and radical Islam and virulent anti-Semitism are common. Put another way, Syria is not a fertile breeding ground of the sort of people who are going to fit into the culture of a country like America and make a big contribution.

As if that isn’t bad enough, Syria is also an ISIS stronghold and the terrorist group has publicly promised to use the migrant crisis to sneak its members into Western countries.

This is not an idle threat.

You hear a lot of talk about America’s rigid screening process for refugees, but in practice almost everyone who applies (even the people from other nations

In fact, if you guessed that 80% of these refugees would end up on food stamps if they come to the United States, you’d probably be UNDERESTIMATING how bad it will really be.

According to Office of Refugee Resettlement (ORR) data highlighted by the immigration subcommittee staff of Sen. Jeff Sessions — chairman of the Subcommittee on Immigration and the National Interest — in FY 2013, 91.4 percent of Middle Eastern refugees (accepted to the U.S. between 2008-2013) received food stamps, 73.1 percent were on Medicaid or Refugee Medical Assistance and 68.3 percent were on cash welfare.

Why should any American who cares about his country want thousands of new refugees who’ll be welfare cases at best and risks for terrorism at worst? Again undoubtedly, there will be some terrific people who’ll come here from Syria as well, but if we can almost guarantee that they’ll be outnumbered 9-to-1 by people nobody in his right mind would want in his country, how dumb do we have to be to allow them in?

That’s especially true since the United States has already done more than any nation in history to help nations in the Middle East. In the case of Syria specifically, we’re trying to stop ISIS and we’ve given the ridiculous sum of 4 billion dollars in aid to help Syrian refugees, which is more than any other nation. Why do we have to do that AND take in migrants as well? We already take in 70,000 refugees a year, we have north of 5 million illegal immigrants here using their kids to live on the dole (and that’s a VERY conservative estimate), we spend billions we don’t have in foreign aid every year and the American people give more to charity than any other group of people on earth. When is enough, enough? Americans do more for the world than any other 5 countries combined and usually we get little other than grief for it. It’s time that we let other nations do their fair share for once instead of risking the next 9/11 by taking in Syrian migrants.