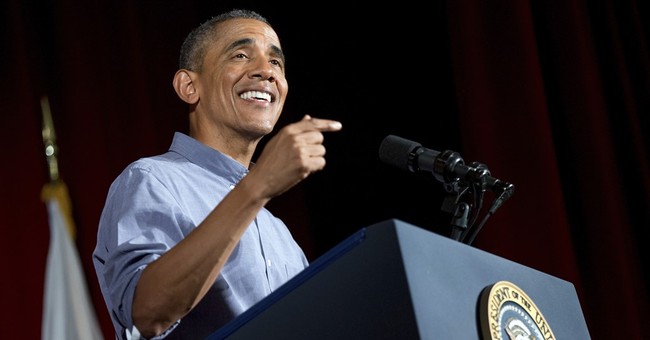 When future generations of Americans look back at the Obama years and try to figure out why government was so dysfunctional, they shouldn’t discount the most obvious answer: The Democrat Party is run by idiots who would struggle with managing a child’s lemonade stand. What follows is a teaspoonful of stupid in the ocean full of “Derp” that are the Obama years.

1) They Bring Illegal Aliens Into The United States: One of the most fundamental jobs of the U.S. government is securing our borders in order to keep foreigners from entering our nation at will. Not only has the Obama Administration completely and utterly failed at that task, it has created “family reunification programs” that fly illegal aliens INTO America so they can be with their relatives who have already broken the law to be here. You’ve heard of the fox guarding the henhouse; well, under the Obama Administration, we have the smugglers guarding the border.

2) Guam Might Tip Over: During a House Armed Services Committee meeting in 2010, Democratic Congressman Hank Johnson had a somber, serious, dry conversation with an admiral about the danger of Guam becoming overpopulated and CAPSIZING. Despite that rather spectacular and well publicized bit of idiocy, Democrat voters have voted Johnson back into office THREE TIMES since then.

3) Trust, But Don’t Verify With Iran: In a move that seems likely to create a nuclear arms race in the Middle East, Barack Obama cut a deal with the Iranians that allows them to inspect their own military sites and declare that they’re not working on nuclear weapons. This is so stupid it sounds like something from a cartoon, but rest assured, real human beings who were put in charge of things actually agreed to this stipulation.

4) Choose A Tax Cheat For Treasury Secretary: In a nation of 318 million people, the one person Obama wanted to be in charge of our tax code was tax cheat Timothy Geithner. When even the man who’s ultimately in charge of the IRS cheats on his taxes, what message does that send to the rest of the country? When the President chooses a tax cheat to be head of the Treasury, what does it tell Americans about the rule of law? It tells them that laws are for little people while the “elite” can do whatever they want. That’s a message the Obama Administration has repeated so many times that it has become a theme of the Democrat Party.

5) EPA Facilitates Mine Spill: While examining a gold mine in Colorado, the EPA managed to accidentally dump a million gallons of toxic sludge into the Animas River in Colorado. Essentially, it was like that scene from Ghostbusters where EPA agent Walter Peck releases ghosts all over the city, except with a disgusting yellow death spew.

6) Pass It To Find Out What’s In It: Nancy Pelosi told the American people that, "We have to pass the (Obamacare) bill so that you can find out what is in it," and bizarrely, that turned out to be true because almost every promise that was made about the Affordable Care Act was a lie. What a way to govern a nation!

7) Offer The Reset Button: Hillary Clinton, who is considered a serious candidate for President despite her unbroken record of ignominy and failure, offered the Russian foreign minister a button that was supposed to say “Reset.” Instead, it actually read “overcharge” in Russian. The State Department couldn’t even manage to translate a single word in Russian correctly under Hillary Clinton’s leadership. So let’s make her President!

8) Enact Cash For Clunkers: In a bizarre move designed to shore up the auto industry and reduce pollution, the government doled out 3 billion dollars in incentives to convince Americans to buy new cars. So, what happened? The taxpayers were out 3 billion, the auto industry LOST MONEY because people bought significantly cheaper cars than expected and in a flourish of legendary stupidity, the government destroyed all the used cars that were turned in. Not only did that keep the cars out of the hands of poor Americans who could have potentially used the vehicles, it caused a huge spike in used car prices. Cash for Clunkers could have just as easily been called Dumb-Dumbs For Disaster.

9) The JV Team Defeats Obama And Takes Over Part Of Iraq: Despite the fact that we’ve had troops in nations like Japan and Germany for 70 years, after Bush’s surge pacified Iraq, Obama engineered a complete pull-out of American troops. As a result, ISIS, which he had previously referred to as the “JV Team” has now taken control of a significant chunk of Iraq and Syria. All the blood, sweat and tears Americans shed over Iraq and it was all thrown away because Obama was too stupid to leave a few thousand soldiers in Iraq to help with intelligence, logistics, leadership and training.

10) Who Needs To Read The Bills? During the debate over Obamacare, Americans learned Democrats aren’t even reading the bills they’re supporting anymore when John Conyers said,

"I love these members, they get up and say, ‘Read the bill.' What good is reading the bill if it’s a thousand pages and you don’t have two days and two lawyers to find out what it means after you read the bill?"

When the same people who tell you that giving more power to government is the solution to every problem admit they aren’t even reading legislation that impacts the lives of every American before they support it, it tells you a lot about why America has become so dysfunctional with Democrats in charge.