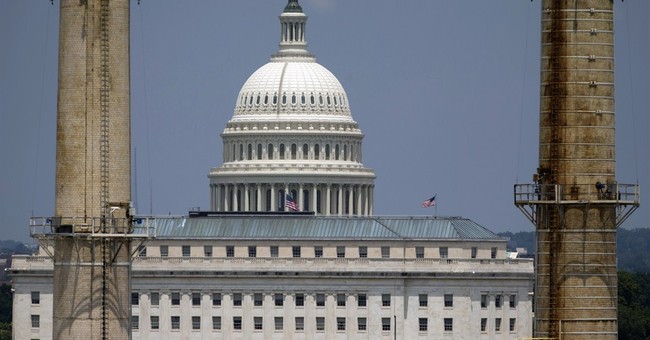 “The nine most terrifying words in the English language are, ‘I’m from the government and I’m here to help.’” -- Ronald Reagan

Relying on big government to help you out would be like relying on the Girl Scouts to spearhead an invasion of Iran. It's the wrong people, in the wrong place, doing the wrong job. Whether Democrats or Republicans are in charge, our government is barely functional. That's certainly not a shocker. Anyone who has had dealings with the federal government can tell you that it's slow, stupid, expensive, belligerent and incompetent. But, here's the $64,000 question: WHY is the federal government so slow, stupid, expensive, belligerent and incompetent? It's not a mystery.

1) It's not the government’s money: One of the biggest reasons a "kid in a candy store" acts like a "kid in a candy store" is because he didn't have to earn the money he's about to spend. It's no different for the government. Government employees are not the ones working double shifts when they're exhausted to collect enough money to pay their taxes. They just collect the sweat of someone else's brow and spend it the way they see fit. If you're irresponsible with your money, you may lose your house. If a company is irresponsible with its money, it may go out of business. Yet if a government employee is irresponsible with YOUR MONEY, he's not on the hook for it personally. If he borrows billions and it gets frittered away, it doesn't come out of his wallet. To them, it's all monopoly money and no matter what happens, they're going to get more to play with next year.

2) The government is doing things it shouldn't be doing: How do you think Burger King would do at selling perfume? How would you feel about eating Purina brand hamburger? How about discount shoes sold by Rolex? If the government were simply building roads, throwing up a few street signs, securing the borders and making sure rotten horse meat isn't being sold as steak in the local supermarket, it would probably be relatively good at its jobs. But, when we have the government declaring your yard a wetland because it rains, micro managing what kind of light bulbs you're allowed to buy, bailing out big corporations and forcibly taking over our health care, of course the government does it badly. Just as you couldn't be a talented brain surgeon, race car driver AND Navy SEAL all at the same time, the federal government simply cannot be all things to all people.

3) It can't go out of business: Theoretically, the government could go out of business. Just ask Saddam Hussein....well, if he were around to ask. However, it's highly unlikely that's going to happen to our government. Yet, that fear is one of the biggest drivers of efficiency in the free market. A company can make a series of small mistakes, be too slow to adapt to change or even make one big mistake, one time and it's game over. That's why businesses tend to be so ruthlessly efficient. It's either be ruthlessly efficient or go belly up. On the other hand, our government makes mistakes that would bankrupt 98% of the businesses on the planet year in and year out. For example, what value did we get out of the trillion dollar stimulus? How is Obama's decision to help radical Islamists take over Libya working out? Are those Obamacare promises panning out just like the Obama Administration said? When the federal government is involved, it's all "New Coke," all the time, forever, no matter how much the public hates the product it's putting out.

4) It doesn't effectively measure success and failure: Government does measure things in a very broad sense. It measures the debt, although it uses an accounting method that hides future liabilities, something CEOs would be jailed for doing. The government can tell you the "jobless rate," although it's essentially meaningless since it doesn't include large segments of the population who have given up on looking for work. The government uses the Congressional Budget Office to project the expense of future programs, but it has rules in place that insure that the CBO dramatically undercounts the costs.

On the other hand, as a small business owner, I can tell you how many Facebook "Likes" I bought last month, how much revenue each Facebook "Like" I buy is likely to produce per month and how long it will take to make my money back. Our government doesn't do that kind of measurement because it's not its money, bureaucrats don't care about "making it back" and because a program is judged a "success" or "failure" based on how it plays out politically, not based on whether it works. One of the truest quotes you're ever going to hear is, "What gets measured, gets managed.” Since almost nothing is effectively measured by the government, almost nothing gets effectively managed.

5) There’s a lack of responsibility: The late, great Milton Friedman once said,

“When everybody owns something, nobody owns it, and nobody has a direct interest in maintaining or improving its condition. That is why buildings in the Soviet Union — like public housing in the United States — look decrepit within a year or two of their construction…”

Similarly, when no one is held personally responsible for the failure of a government program, nobody has a direct interest in maintaining or improving its condition. Who's responsible for Benghazi? The IRS targeting of the Tea Party? Fast and Furious? The trillion dollars we wasted on the stimulus program? The National Debt? Obamacare -- oh wait, there are still people pretending Obamacare isn't a failure.

But, that's just it. Between the multitudes of politicians and bureaucrats tied into every decision, a biased media and raw partisanship, there's a fog bank around every program, decision and calamity created by the government. That's why ultimately, you'd be much more likely to be fired from a government job for saying something racist or making a nasty crack about gay marriage than wasting a billion dollars or getting people killed with your incompetence.