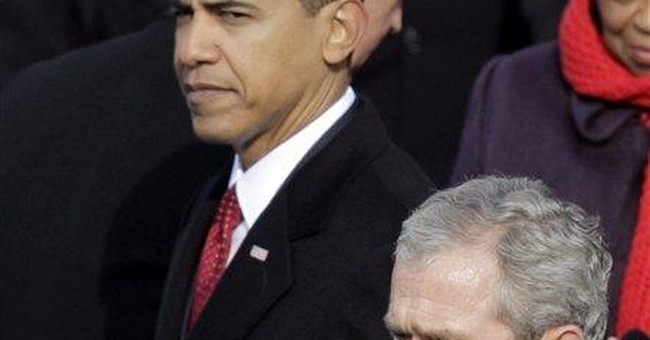 Most liberals in this country are intellectually dishonest which is why they don't have the slightest qualms about grotesque double standards. That's why Al Gore can live in a mansion that consumes energy like a football stadium while he tells you to cut back. It's why Sarah Palin can be sliced apart for things said by Tina Fey on Saturday Night Live while Joe Biden is treated seriously despite being the biggest doofus ever to occupy the Vice-Presidency. It's also why Barack Obama gets a free pass for many of the same things that George Bush was criticized for doing. Here are just a few of the criticisms aimed at George Bush that could be better applied to Barack Obama.

Barack Obama is a chickenhawk: How often did we hear liberals sneer that George Bush was a chickenhawk? How could someone who had never served in combat lead America as Commander-in-Chief?

Well, excuse me for noticing, but George Bush did at least fly planes for the National Guard. On the other hand, despite the fact that Barack Obama never served at all, he's fighting the same two wars that Bush did in Iraq and Afghanistan. He is even ramping things up in Afghanistan while simultaneously forcing our troops to engage in combat under onerous new rules of engagement that will make it much tougher on our soldiers. Guess it's easy for a chickenhawk like Obama to handcuff our troops going into battle when he has never been into combat himself.

Barack Obama is a shameless liar: Bush lied! Bush lied! Bush lied! How many times did we hear that over the last eight years? It was repeated endlessly despite the fact that whatever else you want to say about George Bush, he could fairly be called one of the most honest politicians in America. That's why the "lies" he was supposed to be telling were always things like, "He thought there were WMDS in Iraq, but there weren't" or "Bush said he wants to bring democracy to Iraq, but he's lying!"

Meanwhile, Barack Obama has already broken more campaign promises in less than six months than Bush did in two terms. Obama promised no tax increases for people under $250,000 and he's working on multiple bills, including health care and cap and trade, that would raise taxes even on the poor. He promised transparency, to hold all bills for 5 days before they are signed so the public could comment. It hasn't happened once yet. Barack even promised to "negotiate health care reform in public sessions televised on C-SPAN." How's that pie-in-the-sky promise working out?

Additionally, almost everyone reading this article could probably name off at least one or two more whoppers that President Jug Ears has reeled off. During the campaign, he was promising fluffy rainbows and multi-colored kittens to make every child in the world happy and now that Obama's President, it's "Who are you going to believe, me or your lying eyes?"

Barack Obama is spending us into bankruptcy: George Bush was savagely criticized by the Right for his spending. In fact, it was the single biggest criticism of him throughout his administration -- and rightfully so. The Left even got in on the act. The mainstream media hammered Bush for the deficit and so did the Democrats, despite the fact that they always seemed to be screeching that we weren't spending enough money.

Fast forward to Barack Obama, who is already the biggest spender we've ever had in the White House. The previous champ, FDR, at least had a depression and WWII to deal with. On the other hand, at a time when ordinary Americans have had to cut back, Obama supported Bush's 700 billion dollar plus TARP bill and funneled hundreds of billions of dollars to fat cats in the banking industry. He spent billions more of your money helping his union pals at Chrysler and GM. He slammed through a stimulus bill that will cost more than a trillion dollars despite the fact that it hasn't stimulated the economy -- and since economists were already projecting that the economy would recover in the 2nd half of 2009, if not now, then when? Meanwhile, Obama wants to take over the health care system, he wants to spend billions on Cap and Trade, and they've even been floating the idea of a 2nd Stimulus Bill. Bush may have been like an irresponsible person who was living month to month by paying bills with his credit card, but Obama's like someone taking out a third mortgage on his mother’s house so he can spend the next few months buying rounds of beer for his friends at his favorite bar.

It's very easy to love America when it's all "gain" and "no pain." When Americans give you money, fight your wars for you, and do your dirty work while asking almost nothing in return because they errantly believe that "good will" can be stored up like money in a bank, it's easy to say a few nice words about America. But, when the Americans expect you to actually pay them back for all they've done by taking their side against terrorists or worse yet, actually fight with them the same way they've done for you in the past, that is a different matter entirely.

Nevertheless, Barack Obama promised us a new day when he got into the White House. Oh, we were going to see what real diplomacy looks like when Barack Obama stepped into the Oval Office! However, that hasn't worked out so well, has it? Obama has managed to insult our best allies in Britain multiple times, he sold our Eastern European allies out to the Russians, who incidentally, have run rings around him so far, and he stayed silent for far too long when he should have been speaking up for the people in Iran. Obama has also sided with a dictator-wannabe over freedom-loving people in Honduras, the Taliban have taken over half the country in Pakistan under his watch, and he is already proving to be the most anti-Israeli President we've had in the White House for decades. In other words, our friends now wonder if they can rely on us and our enemies have been emboldened. Even Jimmy Carter took a couple of years to screw things up this badly on the foreign policy front.

Barack Obama is dumb: Yes, I know that Barack Obama went to Columbia University and Harvard Law School. However, George W. Bush also went to Harvard and no one on the Left ever seemed to think that made it difficult to hang the "dumb" label around his neck. What’s good for the goose should be good for the gander.

Admittedly, George Bush was not the most eloquent President we've ever had, but of course, neither is Barack Obama once he gets off his teleprompter. The biggest difference between the two men is not their speaking ability; it's that the mainstream media decided from day one that George Bush was dumb just because he was a Republican from Texas. Then, they spent years highlighting every teeny, tiny piece of evidence that they could find to try to prove their theory. If Bush mangled a word, it was because he was stupid. If he made a mistake -- stupid. If they disagreed with his position? Stupid! On the other hand, the very same media has decided that Barack Obama is smart because he's a liberal; so no matter how many dumb things he says or does, it’s ignored because it doesn't fit the template that the media created based on his ideology.

Yet and still, was it George Bush who claimed that there were more than 57 states? Did Bush say he saw our "fallen heroes" in the audience during a speech? Was it George Bush who made a racist comment about "typical white people?" Did W. spend 20 years without complaint at a church where the pastor spouted off ignorant, anti-Semitic ideas and conspiracy theories? Was George Bush so much of an airhead that he actually ended up "thanking himself in a speech" because that's what his teleprompter said to do? Was it George W. Bush who tried to walk into the White House through a window? If Barack Obama were a Republican, the words "Too dumb to be President?" would have already appeared beside of his picture thousands of times by now.