The Top Nine "Changes" Barack Obama Would Make as President 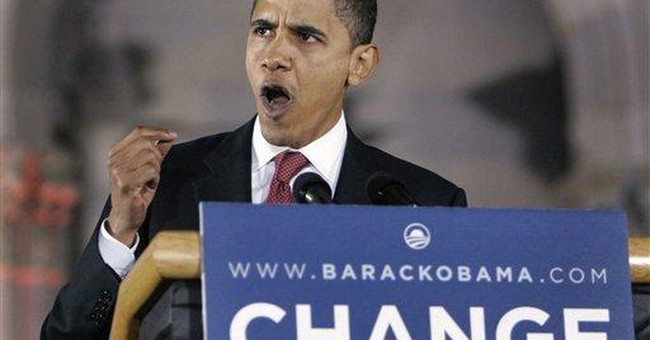 "All change is not growth; as all movement is not forward." -- Ellen Glasgow

As people who have followed Barack Obama closely over the last few months have long since realized, there has been very little substance to the man's campaign besides his determination to lose -- oops, I mean "end" -- the war in Iraq.

If you boil Obama's appeal down to its essential core, most of his supporters seem to like him because he's a relatively young, charismatic, black man who talks a lot about "change," "unity," and the "audacity of hope."

But, what does that tell you about how Obama would behave if he gets into office? Very, very little. After all, pretty much anybody, from Napoleon, to Fidel Castro, to Mickey Mouse could run on a platform of "hope," "change," and "unity" because it's so broad and meaningless.

Of course, that doesn't mean that Barack doesn't have an agenda. He most certainly does have one, but it's just an agenda that he tries to avoid talking about because the better Americans get to know him, the less appealing he's going to be.

So, with that in mind, let me take you through a short tour of some of Barack Obama's radical beliefs. In all fairness, I should note that he has flip-flopped on some of these issues after his Barney the Dinosaur style "I Love You, You Love Me" campaign for the presidency got into full swing. But, experience has taught us that you can put a lot more stock into what a politician says before he starts trying to desperately convince middle America to vote him into the White House, than after.

#1) Weakening America's Military: Barack Obama has pledged, among other things, to make defense cuts during war time, to cut spending on national missile defense, that he won't weaponize space, to slow development of future combat systems, and to seek a "world without nuclear weapons." Is this a man who can be trusted as Commander-In-Chief?

#2) Losing the War in Iraq: Obama is promising to throw away the hard earned gains our troops have made in Iraq by immediately removing combat brigades each month, regardless of the situation on the ground, and by having all of our "combat brigades out of Iraq within 16 months."

The chairman of the Joint Chiefs of Staff publicly warned Barack and, for that matter, Hillary that they could create a "chaotic situation" with their policy that could take the "gains we have achieved and struggled to achieve and turn them around overnight." Come on, Admiral, don't you know that Obama isn't going to listen to what the military has to say about a war when there's an election to be won?

#3) Gay Marriage: Although Barack Obama claims to oppose gay marriage, in 2004 he said that he opposed the Defense of Marriage Act, which is the only thing keeping the courts from imposing gay marriage on the whole country. If you want to see gay marriage become the law of the land in your state, no matter what the voters think, vote for Obama.

#4) Pro-Partial Birth Abortion: It's never a surprise to find a Democrat who's a big fan of abortion, but Obama goes above and beyond the call of duty. He had a perfect rating of 100% from NARAL in 2005, 2006, and 2007, opposes "notifying parents of minors who get out-of-state abortions," and he even opposed banning partial birth abortions. If you want to see as many women as humanly possible in this country putting their own children to death via abortion, vote Obama.

#5) Legalizing Marijuana: Obama, a former (we hope) druggie, who has admitted to using marijuana and cocaine, has said that he favors "decriminalizing marijuana." Perhaps you can't blame him for wanting to make it easier for people to get drugs since, after all, he used them and look how he turned out. If Barack gets into the White House, one day mothers all over America can tell their children that they'll never be anything in life if they use hard drugs and those children can reply, "Well, at least I can be President!"

#6) Handing 845 billion dollars of your money to other nations: Obama's Global Poverty Act would commit the United States to spending, over the next 13 years, 845 billion dollars more than what we already do on global poverty. Obama followed that up with a release that said in part, "It must be a priority of American foreign policy to commit to eliminating extreme poverty..." If Obama actually believes that not only is the United States capable of "eliminating extreme poverty," but that we should actually make that utopian dream a "priority," then he's far too naive to be in the White House.

#7) If you think George Bush is a big spender, you haven't met Obama: Even though the United States is already running a deficit, Obama is planning to push a whole host of new big government programs including a "10-year, $150 billion program to establish a green energy sector," a "$60 billion National Infrastructure Reinvestment Bank," and a "nearly universal health care plan (whose annual price tag he low-balls at $50 to $65 billion)." If you're all for tax and spend liberalism and watching the deficit spiral even further out of control, there's no one you should want in the White House more than Obama.

#8) Amnesty and your tax dollars for illegal aliens: Believe it or not, John McCain, the Republican who is most closely associated with catering to illegal aliens, is actually well to Barack Obama's right on the issue.

Obama favors drivers licenses for illegals, wants to give illegals welfare and Medicaid, wants to let them participate in Social Security, opposes making English our national language, and he favors a comprehensive approach to illegal immigration, AKA amnesty, that even John McCain now claims to oppose.

#9) Gun Control: Obama is a perfect example of the stereotypical, liberal gun grabber. Obama has pledged to "Ban the sale or transfer of all forms of semi-automatic weapons," has "opined unequivocally that D.C.'s ban was 'constitutional'," and in 1996, Obama, in a survey, "supported banning the manufacture, sale and possession of handguns." If you're an opponent of the 2nd Amendment, who believes law abiding citizens shouldn't be allowed to defend themselves, Obama is your man.

Here's What's At Stake If Smith and Wesson Loses Its Case Against New Jersey
Townhall
Biden tells those who don't get vaccinated they will 'end up paying the price'
Twitchy
Lori Lightfoot Gives the Game Away on Democrat 'Trust the Science' Arguments in MSNBC Interview
Redstate
The COVID-19 Test No One Is Talking About: Make Sure Your Children Have It Before They Are Vaccinated
PJ Media