The Ten Most Annoying Things About the Race for the Presidency 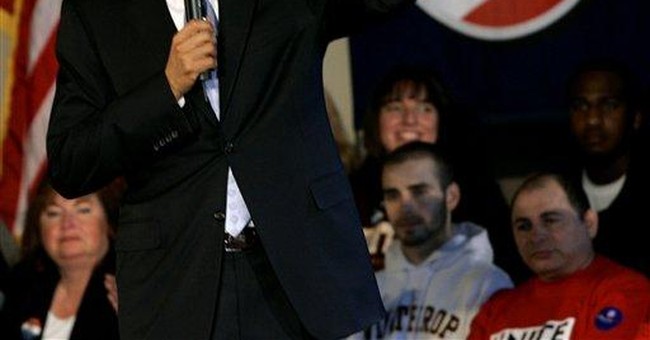 Change, Change, Change: Everyone seems to be campaigning as the candidate of change, but what does that mean exactly? Wouldn't a depression be a change? How about basing our economy on Communism instead of Capitalism? That would be a change, right? In fact, I think that's pretty much the core of Hillary's platform. Speaking of which, isn't it odd that in a campaign where everyone is paying lip service to change, the two front-runners are John McCain and Hillary Clinton?

Lack of Focus on the Issues: The Democrats are touting their diversity: They have a woman, a black man, and a white man still in the race, all of whom have almost exactly the same position on every issue. So, whatever the deciding factor is for the Democrats, it certainly won't be the issues.

On the other hand, ironically, the three Republican candidates whose views most closely mirrored those of rank and file conservatives -- my former employer Duncan Hunter, Tom Tancredo, and Fred Thompson -- are all already out of the race.

This tells you a lot about how much of an impact the issues ended up having on who the nominee for both parties is ultimately going to be: not much.

The Candidates are Running for President, not National Pastor: I actually find it comforting to hear a little religious rhetoric from presidential candidates, but I don't really care what their stance on evolution is, don't want to see long debates about bookshelves that look like crosses in the backgrounds of political videos, and I don't think the key factor in choosing a President should be who sounds the most Christian. Religion in political contests is like eating green apples. Eating one is probably good for you, but you eat 10 and you'll end up with a stomachache.

Entitlement in Iowa and New Hampshire: If John McCain goes on to capture the nomination, in large part it will be because he spent weeks walking around the tiny northern state of New Hampshire, pandering and kissing up to people, many of whom refuse to vote for a candidate unless he has sat beside of them at a diner or shaken their hand.

There's certainly something to be said for retail politics, but it shouldn't be a decisive factor in choosing the President of the United States.

The Intra-Party Blood Feud on the Republican Side: I'm all in favor of taking a hard look at the candidates and getting all their flaws out in the open during the primaries. Moreover, if a few sharp elbows get thrown in the process, that's all well and good. Heck, I've even thrown more than a few of those elbows myself.

But, the childish pouting, hysterical tantrums, and bitter carping are starting to get out of control. Conservatives would be a lot better off if they stepped back, breathed deeply, and took Reagan's 80% rule to heart -- "My 80 percent friend is not my 20 percent enemy" -- before they help create rifts that may take the GOP years to heal.

Reaganmania: Speaking of the wit and wisdom of the Gipper, the way Ronald Reagan is being mythologized is getting downright unhealthy for the Republican Party. Conservatives seem furious that there is no other Reagan running for office. However, given that great Presidents come along very rarely, it's entirely possible that there won't be "another Reagan" in our lifetimes.

Worse yet, even the real Reagan couldn't measure up to the airbrushed Reagan that people are touting today. Yes, Ronald Reagan had moments of incredible eloquence that resonate as clearly today as they did 20 years ago, but he wasn't a mesmerizing speaker all the time. There were times when Reagan sounded bored, distracted, or just spat out dull boilerplate.

He also compromised with the Democrats and did things most conservatives disagreed with. Keep in mind that we're talking about a former Democrat who pushed through an amnesty, raised taxes, signed an abortion bill when he was Governor of California, and even though his heart was in the right place, deficit spending exploded under Reagan.

The reason I point that out is not to denigrate the man, because he truly was one of the greatest American Presidents, it's to get people to understand that we are getting too dogmatic and inflexible about what we expect from Republican politicians.

It Never Ends: Technically, the 2008 campaign season started before the election of 2006 and got going full blast at the beginning of January, 2007. At this rate, the 2012 election is probably going to start sometime around the midpoint of 2010, which leads to a pertinent question: does anyone have time to actually govern anymore?

The Gloom and Doom of the Electorate: We live in an age where a person with a $20,000 truck in the driveway of his $150,000 house, eats a steak, surfs the net on his computer, and then sits down and curses at the politician he sees on his 50 inch Plasma screen TV because he thinks that the pol isn't doing enough to make his life better.

Sound Byte Debates: Because relatively few people watch the debates and news outlets don't bother to go into much detail about what was said beyond funny lines, screw-ups, and who was fighting with whom, the debates have been incredibly shallow affairs.

The sad but honest truth is that a candidate who aims a vicious attack at another candidate and gets off a funny line will be helped much more by a debate than a candidate who goes into detail about well reasoned, popular positions. That's because 2-3 million people may hear the brilliant answer, but it'll never get another minute of airtime. Meanwhile, the clever quip or "Candidate X is a liar who is distorting my record" will be in front of 30-40 million people by the end of the next day on the Evening News, in the Drudge Report, on YouTube, etc.

Race vs. Gender vs. Class Warfare on the Democratic Side: The Democratic race has been particularly sickening to watch, not just because of how openly socialist the candidates are, but because of the grotesque way the Democrats encourage infighting among groups of Americans.

Obama, to his credit, hasn't tried to use his race as a crutch, but his supporters have cried racism left and right when he's criticized. On the other hand, Hillary Clinton has turned the campaign into a gender war. Vote for her and stick it to those damn men! Then there's John Edwards, who talks about an America that's right out of a bad Dickens novel and is pledging to tear down and destroy all the successful people in society -- with the exception of trial lawyers, of course, because he cares so much about the poor. Having a major political party that so habitually exploits and exaggerates the differences between Americans is not healthy for the country.