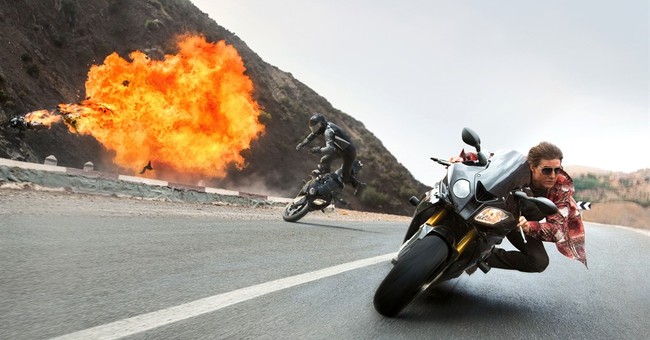 In the first ten minutes of Mission Impossible: Rogue Nation, we see special agent Ethan Hunt (Tom Cruise) climbing aboard a moving plane as it begins taking flight. Hunt is tracking a massive stack of weapons on the plane and won’t surrender until he steals them away from the terrorist organization that has acquired them. It’s an intense action sequence showing Cruise at his action-star best that reminds us why this cinematic franchise — which launched nineteen years ago — remains so exciting and invigorating today.

Making his fifth appearance as Hunt, star/producer Cruise knows what action fans are looking for here and delivers it in spades.

In this entry, the United States government officially shuts down the “Impossible Mission Force,” which was being managed by the bureaucratic William Brandt (Jeremy Renner). After years of lackluster results according to them, the CIA (led by Alec Baldwin’s Alan Hunley) has gotten tired of the IMF’s warnings about an underground terrorist organization named the Syndicate and have called Hunt back to D.C.

Hunt knows that the Syndicate exists, but government officials underestimate the threat, believing that the Syndicate is simply a figment of IMF’s imagination. It’s not, and the CIA’s inability to understand this growing threat leaves Hunt on a solo mission of tracking them down and uncovering their secrets.

The film, written and directed by Christopher McQuarrie, has a spirited pace that nicely balances the story and interplay between the characters with the action sequences that Mission Impossible fans expect. The basic plot is established in the film’s brisk first few minutes, but then, the pace settles down to show Hunt’s research into the Syndicate. Six months pass as Hunt is being chased by the CIA, while he in turn is trying to track the Syndicate’s activities.

When the action set pieces do arrive, they are often well-crafted affairs that build tension without relying on endless destruction. In one of the film’s best scenes, Hunt tracks the Syndicate to an opera house to prevent the assassination of a foreign leader. The setting of an opera fits nicely in with the sequence, which shows Hunt tracking a team of elusive potential assassins in the theater. When he finds them, the tense scenes that follow unfold like scenes from a play with the focus being on the characters’ careful movements backstage. Lacking extraneous flair or effects, the craft at play here really stands out.

Of course, there are some great major car chases and explosions that follow later in the film, but it’s the more nuanced and quieter scenes of action that really make this action movie stand out.

Many of the players from the previous film return here, with Ving Rhames and Simon Pegg again serving as invaluable assets to Hunt’s team. As Ilsa Faust, Rebecca Ferguson joins the series as a manipulative British agent. As the leader of the Syndicate, Sean Harris steals several scenes as Lane — a jaded former British intelligence officer whose work in the field has left him a jaded psychopath who believes that terrorism will serve the public good.

Through all of the action scenes and all of the funny one-liners here (and there are plenty to choose from), there’s an undeniable battle between good and evil at this film’s core. The idealistic and renegade Hunt believes in justice and will do anything to fight for it. Lane, the cynical terrorist, believes he’s “killing to bring about change,” hoping that his taking of innocent lives will somehow make the world a better place.

For some, it may be impossible to get excited about a fifth entry in a film series, but Christopher McQuarrie has done the near impossible. McQuarrie and Cruise have crafted here a smart and exciting summer blockbuster that keeps this series running at full throttle.

Here's the Interesting Tidbit About All Those Doctors Who Called Joe Rogan a Menace to Public Health
Matt Vespa
Walensky Says She Will Improve Messaging Surrounding COVID-19
Madeline Leesman
Gen. Mark Milley Tests Positive for COVID-19
Madeline Leesman
Damn Everyone to Hell: Here's An MSNBC Rant For the Ages
Matt Vespa
There's Another Looting Crisis in LA Being Ignored by Democrats
Spencer Brown
'Joe Biden Has Failed': MSNBC Acknowledges How Biden Has Broken One of His Promises
Leah Barkoukis