The 60s Come Roaring Back in the Comedy Prequel 'Minions' 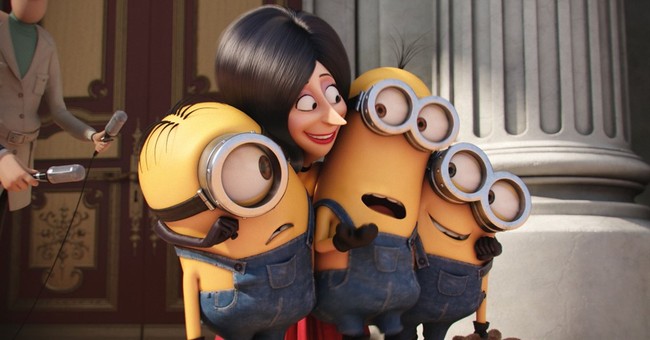 Screenwriter Brian Lynch starts his latest feature in the prehistoric era with the minions—who served as supporting characters in the Despicable Me films—following any monstrous leader they can find. As the narrator (voiced by Geoffrey Rush) notes, “Minions have been on this planet longer than we have” and have always wanted to appease the most despicable villain they could find. Their silly antics though have— throughout the history of the world— undermined their past masters.

After spending years in seclusion after one botched mission, three of them— Kevin, Bob and Stuart— venture out into the world to find a new leader to follow. Their road trip brings them on a few funny adventures, including a brief stint with a seemingly-innocuous family that picks them up on an American highway (voiced by Michael Keaton, Allison Janney and Michael Beattie). Their ultimate destination though is a supervillain convention where they befriend a new ultra-villain in town named Scarlet Overkill (voiced by the enthusiastic Sandra Bullock).

There are only a few hilarious scenes in Minions but there’s an overriding goofiness and giddiness to the production. Even when I wasn’t laughing, I was still smiling at the silliness. The writing is innocuous but charming and exists in a comfortable spot, never aiming for the ingenuity of Pixar films like the recent Inside Out but never settling for lowbrow and obnoxious punchlines like the disastrous 2014 film The Nut Job.

It helps the filmmakers have brought a distinctive tone to this prequel. Lynch sets much of the film in the 1960s, which lets the adults enjoy some of the smart set-ups as much as the kids are enjoying the minions themselves. From political posters in the background to nods to famous albums of that decade to a soundtrack of music that 60s fans will love, the filmmakers seemingly understand that a lot of grown-ups will be seeing this movie (alongside their children and grandchildren) and they aim to please the adult crowd with a few inside winks and references that kids won’t be able to appreciate for years.

As the villainous Overkill, Bullock does a solid job voicing one of the main characters with a speaking role. Her over-the-top personality stands as a nice contrast to the minions, who are amiable but ultimately naïve creatures. Overkill’s plan— working alongside her husband Herb (Jon Hamm) — is to steal the Queen of England’s crown, which sets up a few strong scenes where an unlikely hero gains nobility in Great Britain.

Notably, there are a few out-of-place scenes here that might give parents a momentary hesitation about seeing this. A few jokes about a torture room might cause some parental squirming but taken as a whole, Minions is a much smarter and funnier film than most would expect.

The main characters may be small in stature but the silliness in their film is big enough to keep this comedy satisfying all the way through the end of the credits (where an additional scene lays waiting for those patient enough to stay for it).