Jurassic World: The Summer Blockbuster We’ve Been Waiting For 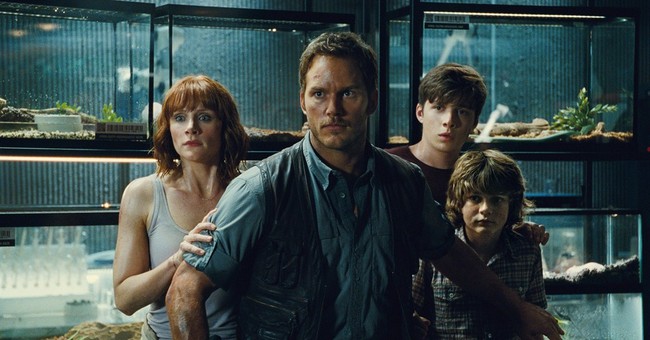 Jurassic World is the movie that Jurassic Park fans have been waiting over two decades for. Over the past week, I’ve been reviewing the original trilogy of films and although the first two sequels (The Lost World: Jurassic Park and Jurassic Park III) were strong enough to merit recommendations, neither of them came close to matching the excitement of the original.

This third sequel both steps away from the trilogy’s narrative—the second island isn’t mentioned at all—while embracing the concept of the original. It opens decades after the events of Jurassic Park transpired and years after the successful launch of Jurassic World, the dinosaur-centric amusement park that John Hammond dreamed of building. (The park is located on the same island where Jurassic Park took place.) Unfortunately, after years of success, the park’s revenue is down and investors want to offer something more on the island. Claire (Bryce Dallas Howard), the park’s operations manager, notes that “No one’s impressed by a dinosaur anymore."

To fight the ennui, Claire has helped facilitate the creation of a new dinosaur: the Indominus rex.

Director Colin Trevorrow seems to have taken a few great notes about this production from Steven Spielberg, the director of the original two films and an executive producer here. Trevorrow slowly reveals the dinosaurs at the park, building up momentum for the big reveal of what the new dinosaur looks like. He also meticulously directs his action sequences, following some of the templates that Spielberg introduced in the first film but then making them his own. Some of the scenes—especially the climactic battle at the end— are very similar to the ones Spielberg created but with very different results.

Like in the original, the hero is a dinosaur expert who knows more about dinosaurs than the bureaucrats making all of the decisions. Owen (Chris Pratt, proving again how great of an action star he is) is a raptor trainer who has developed a great respect and rapport with the animals, and quickly realizes that genetically engineering new dinosaurs was not a good idea. After predicting the chaos to come, Owen is sent in by Claire to help rescue her two nephews Zach and Gray (Nick Robinson and Ty Simpkins), who are visiting the park and get stuck in the mayhem after the new dinosaur escapes its pen.

There’s a lot here that would seem familiar to fans of the original film. From the two innocent siblings whose vacation turns out to be anything other than relaxing to the formats of same of the attacks, there are a lot of nods to the original. However, the scope of the film is much wider (and many of the special effects are greatly improved) and the filmmakers fully reveal the scope and failures of John Hammond’s grand vision of an amusement park.

From the rides on the Triceratops to the hamster balls that visitors use to roam the open areas of the park, Trevorrow and the production design team seemingly have “spared no expense” in creating this beautiful but deadly world.

One of the most revealing scenes in the entire film comes when Gray, a young boy whose parents are going through a divorce, arrives at the park. He runs to the front of the transport he’s travelling on and stands in awe of the park. Looking back at the trilogy that came before this, it’s obvious that such a sense of wonder hasn’t been felt since the original film. Sure, there were some exciting and elaborate moments in the last two movies but this movie re-captures the excitement and exuberance of the original while never undercutting the power of that tremendous film.

Despite the fact that Jurassic World is a sequel, it still feels fresh and exciting (some of the action scenes are some of the best in the series) and with strong performances from Pratt and Howard (although her character isn’t written as three-dimensionally as one would hope), this is a blockbuster that reminds us what great summer movies are capable of.