San Andreas: A Disaster Movie Without an Agenda 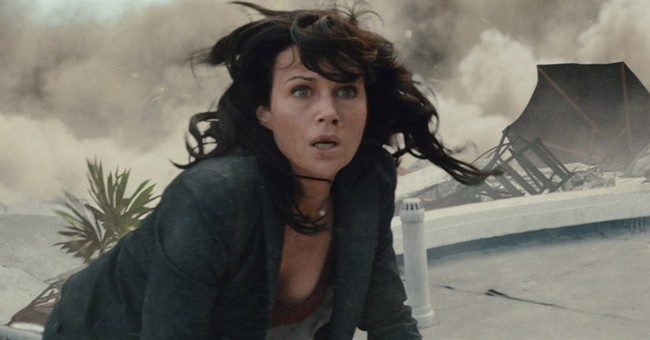 San Andreas works as both a disaster movie and as a stirring appreciation of disaster movies of the past. Despite its obvious inferiorities, it reminded me a lot of 70s disaster like the 1974 epic The Towering Inferno. Here, the plot holes may be as big as the craters the earthquakes create but the special effects and the script’s knowing nods prevent the film from falling apart.

Dwayne Johnson (Furious 7)—plays Ray, a rescue-chopper pilot whose family is in crisis. His wife Emma (Carla Gugino) wants a divorce and her new boyfriend Daniel (Ioan Gruffudd) is about to spend some valuable bonding time with Ray and Emma’s daughter, Blake (Alexandra Daddario). From the film’s opening moments, it’s obvious that Ray and Emma belong together and that Daniel is an obvious obstacle standing in their path. No matter. Life will find a way to bring the couple closer to one another.

Despite numerous clichés along the way, the film manages to find (apologies for the pun) solid footing as its story unfolds. Perhaps that’s because director Brad Peyton and screenwriter Carlton Cuse (with the help of Andre Fabrizio and Jeremy Passmore) seem to be in on the joke. They know what the viewers want from movies like this and they intend to offer that, despite some silliness along the way.

A perfect example of the screenwriters embracing the silliness of the genre is Ray’s occupation. His full-time job is to rescue people from disasters like the earthquakes that strike here but in the film, his only ambition seems to be rescuing his own family. He literally leaves hundreds of other people behind in pursuit of finding and rescuing his daughter.

Some could see this as a critical fault of the movie (and I have made a few jokes about that) but it’s also easy to see that choice as the director winking at the audience and saying “I know what you came to this theater for and I am going to deliver that.” Deliver it, he does.

From its opening moments, San Andreas delivers the special effects and traumatic destruction that you would expect in a film like this. Bridges collapse. Cruise ships are destroyed. Cities are decimated. Peyton brings us into these scenes and shows us the devastation of these insane events while still presenting characters that we begrudgingly grow to care about, despite their lack of depth.

Hugo Johnstone-Burt and Art Pakinson, who play British brothers who befriend and eventually rescue Blake, deserve special recognition here though for actually attempting to build solid characters in the midst of this crisis.

Much of the film revolves around Ray’s attempt to rescue his family but Peyton intercuts this with scenes featuring Paul Giamatti as a California Institute of Technology professor named Lawrence who has helped invent technology that helps predict seismic catastrophes. Aside from an early set piece at the Hoover Dam, Lawrence— and his team of fellow scientists and students— mostly exist far away from the rest of the story. It’s obvious that Lawrence exists in the story to explain to the audience (both in the theater and over the cinematic airwaves) the causes of these natural disasters.

If the film existed without self-awareness, it would be a complete mess but the script seems to recognize the silliness of some of its antics and comfortably follows into the pattern it seemingly knows so well. When Lawrence predicts a new massive earthquake is on the way halfway through the story, one of his students asks “Who should we call?” Lawrence responds without a note of irony: “Everyone.”

It’s those moments of knowing goofiness that make San Andreas stand out amongst many of its far more serious and self-righteous contemporaries.