REVIEW: The Avengers Age of Ultron 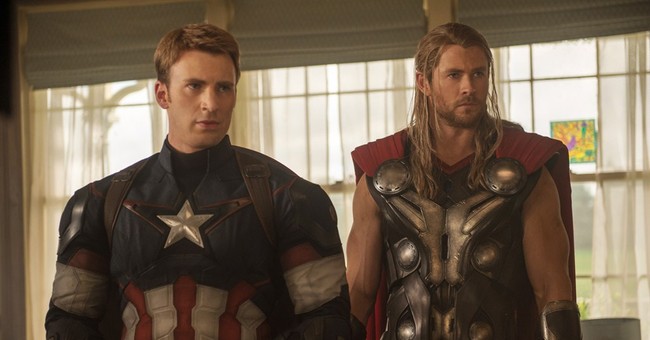 For all its faults (and yes, there are plenty of them), The Avengers: Age of Ultron is still a fun escapist superhero film. There are some elements that are overdone (like the bloated action sequences which are reminiscent of ones from the Transformers series) but when the story focuses on the interplay between the characters, it thrives and really shows the clever interplay that writer/director Joss Whedon is well known for.

A hint of that interplay is introduced during an early action sequence, which shows the Avengers united as a unit once again. When Iron Man (Robert Downey Jr.) uses an expletive, Captain America (Chris Evans) responds calmly with one simple word: “Language.” Despite the fact that the Captain is now living and thriving in our contemporary world, his allegiance to the innocence of the past still manages to shine through. Of course, the Avengers tease him about his old-fashioned morals throughout the story but that teasing only shows how fond this team are of him and one another.

During that same early scene, two of the story’s main villains are introduced. When one of the characters fighting the Avengers orders to “Send out the twins,” we know that this duo will mean trouble. The twins— otherwise known as Pietro Maximoff/ Quicksilver (Aaron Taylor-Johnson) and Wanda Maximoff/ the Scarlet Witch (Elizabeth Olsen) are tough indeed and they soon find an even tougher ally in Ultron (voiced by James Spader), an artificially-intelligent robot Iron Man created to protect the planet (“Peace in our time. Imagine that,” Tony Stark had said arguing for Ultron’s creation).

The machine turns against him though threatening to destroy the whole team. Allied with Pietro (aka Quicksilver, whose speed makes him nearly impossible to catch) and Wanda (who uses mind manipulation to control her opponents), the trio proves to be a worthy adversary for our heroes.

The plot is secondary though to the characters. Here, the screenplay focuses more on some of the supporting characters who really have a chance to shine. For instance, we get a more nuanced view of the suburban Hawkeye (Jeremy Renner), a character that shows that being a superhero doesn’t have to consume a person’s full life. Also, we get a closer look at characters like Natasha (Scarlett Johansson) and Bruce Banner (Mark Ruffalo), two characters that are allowed a chance to really grow here as they develop a romance with one another (scenes showing the two of them together show that these characters really deserve their own new movies). The film may give short shrift to Thor (Chris Hemsworth) but in a film with so many supporting players, it seems like some sacrifices had to be made.

For what it’s worth, Ultron is a more powerful villain than Loki was in the original and I was expecting that he would be a more compelling one onscreen. His plot to destroy the world though offers nothing new and even when he’s at his most menacing, he’s not as manipulative as Thor’s brother was.

The villain in the first film didn’t seem like a proper matchup to the whole team of the Avengers. Now, the villain is more dangerous but his schemes and plans aren’t half as fun as watching the cunning Loki.

Still, The Avengers: Age of Ultron offers is a charming look at the main team as they work together and compete against one another (a competition amongst them to lift Thor’s hammer offers a few chuckles during the film’s more dialogue-driven moments. It’s hard not to be disappointed that the original was better but it’s also hard not to have fun watching the characters play off against one another.

Even when the action disappoints, we’re reminded that Joss Whedon’s quirky touch really makes the Avengers take off.