Hollywood Takes on Faith in the Midst of Despair 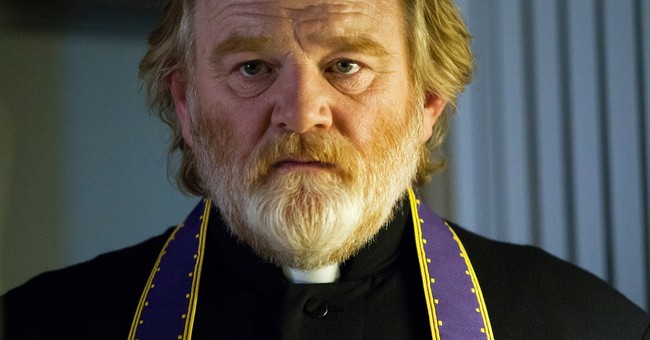 Editor's note: This article is cross-posted at JohnHanlonReviews.com

“The road to despair is becoming ever easier,” actor Brendan Gleeson (Braveheart, Into the Storm) noted recently during a roundtable interview in Washington D.C.

The three-time Golden Globe nominated actor was in the city to promote his new religious film Calvary and both he and writer/director John Michael McDonagh sat down to talk to film critic Nell Minow and I about the project.

Gleeson stars in the drama as Father James, a local priest in a small Irish community who is faced with a deadly threat as the film begins. A male parishioner—who the priest recognizes by the voice, but audiences likely won’t— walks into the confessional booth and tells Father James that he’s planning to murder him in seven days. The parishioner says that he will meet the pastor on the beach on the seventh day— Sunday— and take his life.

The parishioner believes that James is a good man but doesn’t care. He was molested as a child by a now-deceased priest and he wants to enact vengeance on an innocent victim—a fellow man of the cloth— because of that.

The film—which has a few comedic moments but clearly has dark overtones—speaks to the idea of disillusionment and finding hope and faith in a cynical world where such things are often scoffed at. Father James, throughout his troubled and perhaps last week on earth, remains a good man of faith even though he knows his position in the priesthood could mean his demise.

In visualizing the film, McDonaugh inserted a few visual nods that speak to the main character’s painful journey. The director was partially inspired by Andrew Wyeth, an artist he stated sometimes inserted darker elements into his otherwise hopeful paintings. Sometimes in a Wyeth painting, McDonaugh said, there will be “children running and they'll be a sinister element to the child running or stuff like that so that was a big influence on the movie.” He also noted that after filming he realized that a nearby mountain served as a background in many of the exterior scenes.

“I realized-- what is its meaning [to the film]-- and it was only after seeing a rough cut of the film— I realized the mountain doesn't care what we think or what's gonna happen to us,” he said. “We’re all gonna be gone. The mountain will still be there.”

No matter how wonderful and loving our lives may be, the world will always exist around us and survive without us.

That imagery and the dark storyline at the heart of the film is very disheartening when you think about it. A good man is going to be murdered for something he didn’t do? Even when there’s joy in the world (as in the Wyeth paintings), there’s still “sinister elements” sneaking in? No matter how important our lives may be, we will all be dust in a matter of years?

Why would anyone want to see this depressing movie?

The answer is that in the midst of darkness, there is hope. And indeed, sometimes it feels like we’re in the midst of darkness and that the light of life has been seriously dimmed. As Gleeson stated in the interview, many of the institutions that are supposed to serve us—whether they be large businesses, government officials or politicians we elected to serve us—have made mistakes along the way leading to the fact that “people have been left abandoned.” And speaking of the pedophilia scandal from a few years ago, Gleeson noted that the Church is, “the institution that is supposed to give [people] a higher purpose and a higher feeling of destiny, has proven incapable of coping with the burden, has been corrupted by the power within its own structure…”

But even in the darkest of times, there are people who do the right thing and make the right decisions and choose the harder path. Father James is one of those people. He knows that people have become cynical and disillusioned and pained by a world that often undermines their optimism, but he also knows that it’s important to keep having faith in a higher power.

As Gleeson noted, “I think what the film generally for me is about that notion that yeah [the institutions may have failed us] but people are still worth believing in and… the reason [Father James] goes to the beach is to insist it's never too late. There’s always hope.”

“Despair,” Gleeson noted as our interview came to a close, “is not all it's cracked up to be.”

To check out more reviews of all the latest films, click here.