Citizen Birthright Can Be Defeated and Kavanaugh Will Be Instrumental

John Dempsey
|
Posted: Nov 02, 2018 12:01 AM
Share   Tweet
The opinions expressed by columnists are their own and do not necessarily represent the views of Townhall.com. 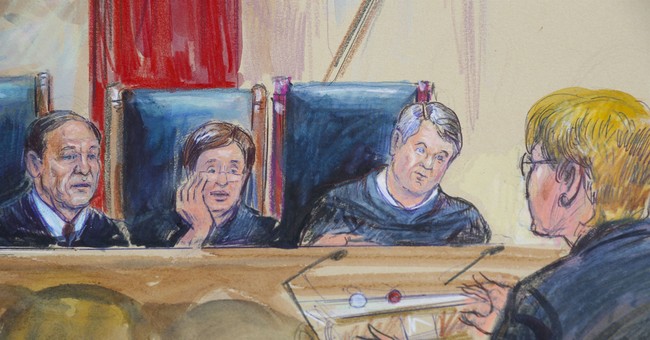 Immigration is still at the top of the political discussion, especially after President Trump’s recent comments about citizen birthright. A common talking point for those who are in favor of illegals jumping the border to have a child and stay in the United States is “well, that is just what the Fourteenth Amendment allows.” Does it, however?

Judge Andrew Napolitano is a Fox News commentator on legal issues. He weighed in on the matter during "Outnumbered," but gave no real argument as to why Trump was wrong. His main stance was “so says the Constitution,” but he did not mention an important piece.

Conservatives tend to favor an original construction interpretation of the Constitution. To do this, one must look at the spirit, i.e., reason, time and current events that led up to a new amendment.

The Fourteenth Amendment has nothing to do with illegal immigrants. A significant takeaway from Justice Kavanaugh hearings was the interpretation of the Constitution is essential. He talked in great length about the spirit of an amendment when drafted and implemented. Justice Kavanaugh is an originalist and looks deep into the purpose of modification.

In July of 1868, the Fourteenth Amendment was ratified and placed into law. The spirit of the new amendment was not about illegal aliens. It had nothing to do with the issue. At that time, the last addition to the Constitution abolished slavery, which took place in the Thirteenth Amendment.

Adversaries to the freedom of released slaves were starting to create laws, i.e., Jim Crow, in an attempt to end around the Thirteenth Amendment. They tried to undermine federal law, causing dissension between states and the Federal Government, bringing forth a need for the Fourteenth Amendment.

Illegal immigration is not a reason for the amendment. It was based on the treatment of slavery post-emancipation and does not apply in this situation. Congress needs to come together and pass a law that addresses this often misinterpreted amendment.

The left was against so-called “anchor babies” until Trump was. Now, they are outraged at opposition to the practice. The travel ban was Trump’s first hurdle against the left on immigration. The next will be this issue, but it is a winnable one.

This debate will make its way to the Supreme Court, and we will see why the left fought, lied and committed character assassination on Justice Kavanaugh. They needed at least a swing vote that would block Trump’s agenda, but with Kavanaugh, there is no guarantee.

The need for an originalist on the Supreme Court is paramount because the four liberal justices would somehow find a way to relate the amendment to immigration. However, those in the mindset of constructionism will look at the spirit and rule from an originalist standpoint which would benefit the country.

The left-wing media will bring on pro-amnesty immigration talking heads to pose as immigration pundits. A massive crisis will be conjured up to make Trump look like a heartless “dictator.” However, he is bringing this issue to the forefront of our society for discussion. For far too long, illegal aliens have been unlawfully crossing the border to have a child then apply for welfare.

The American taxpayers who work and still struggle to make ends meet should not foot the bill simply because someone from another country wishes to fulfill their selfish desires and not enter legally.

The Fourteenth Amendment has nothing to do with immigration. The spirit is about slavery and the treatment of those slave’s generations in the future. The media will ignore that fact and base their argument on emotion, along with an intentional misinterpretation of the amendment for political gain.