Joe Connor
|
Posted: Sep 02, 2017 12:01 AM
Share   Tweet
The opinions expressed by columnists are their own and do not necessarily represent the views of Townhall.com. 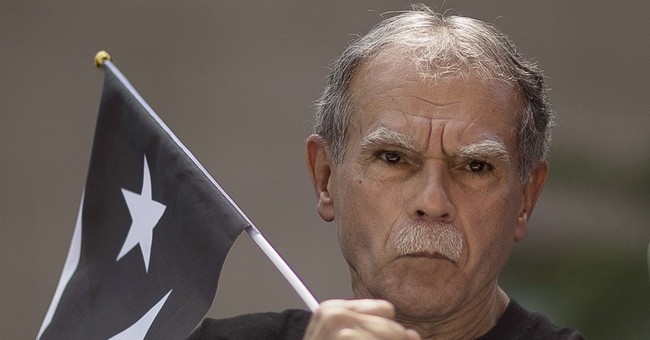 The criticism began last week with their disingenuous outrage that the president would free Arpaio (charged with a misdemeanor), a Korean War veteran, 23 year tenured sheriff; a man who dedicated his life to the protection of America and his fellow citizens.

Little or no mention was made by the elites that in August 1999 the Clintons offered executive clemency (commuting sentences) to sixteen members of the infamous Marxist Puerto Rican terrorist groups Los Macheteros and Armed Forces for National Liberation (together “FALN”).

The FALN waged war against America with over 120 bombings between 1974 and 1985 murdering 5 including my father Frank Connor and three others (wounding 60) on January 24, 1975 during the horrific lunchtime bombing of New York’s historic Fraunces Tavern.  Fraunces was specifically chosen by the FALN as it is the cradle of liberty in the United States. It is where the Sons of Liberty met and where General George Washington bid farewell to his officers after our war for independence was won.

The terrorists were arrested, tried, and convicted in the early 1980s and sentenced in Chicago to appropriate prison terms of 55 to 90 years.

None of the terrorists requested clemency.  So dedicated were they to their “war” against America and in creating a Cuba like Communist Puerto Rico, that none accepted the clemency which included conditional renunciation of violence for a political cause and disassociation with other felons.  None other than future AG Eric Holder engineered the politically driven clemency to help Mrs. Clinton gain traction with Latinos for her upcoming 2000 NY senate race.  Although clemency is an individual grant, Holder and the Clintons allowed the terrorists 30 days to decide during which they were allowed conference calls with each other between prisons.

On September 10, 1999 all but one FALN terrorist, Oscar Lopez Rivera, accepted the terms and walked out of prison; most to heroes’ welcomes. Lopez defiantly refused.  As a small group of FALN victims and victims’ family members heard when we kept Lopez in prison at his 2011 parole hearing and from his rhetoric since, Lopez refused clemency because he still believes in his cause and his comrade Carlos Torres (released in 2010) was not offered clemency in 1999.  Lopez, who was sentenced to an additional 15 years for a violent escape plan revealed himself as an unrepentant terrorist captain, going down with the ship.

But that changed in January 2017 when Barack Obama, during his final days in office, offered an unprecedented second clemency to unrepentant terror leader Oscar Lopez Rivera.

In this case, there is little if any difference between a pardon and commutation of sentence.

Since release, the terrorists have been treated as heroes by the left and the media. Not only are they forgiven, but they’ve been treated as if they committed no crimes at all.  In February of this year, Rahm Emmanuel’s Chicago named a street for Lopez, a man who terrorized Chicago.

In New York, Mayor DeBlasio and his number two, Melissa Mark Viverito, honored Lopez with a “Freedom Hero” award at this year’s Puerto Rican Day Parade until a small group of us convinced all corporations from Goya Foods to JetBlue and the New York Yankees to pull their sponsorship.  Imagine, a Freedom Hero award for a terrorist who attacked freedom with the goal of subjugating Puerto Ricans in a Marxist state.

Just this week, terrorist Lopez was a guest speaker at Metropolitan State University in Minnesota railing against the United States for “colonizing” Puerto Rico and justifying my father’s murder to a friend of mine who confronted Lopez about his terrorist past. Lopez and his terror supporters fail to acknowledge that less than 5% of Puerto Ricans have ever voted for independence from the US and this year an astounding 97% rejected Lopez and voted for statehood.

So Mr. Trump pardoned Arpaio, a man who dedicated his life to the security of the United States, while Clinton and Obama offered freedom to terrorists who murdered our father and dedicated their lives to America’s destruction.

And Mr. Trump is attacked?

Such is the compassion of the Left.

No wonder the American people are fed up.