Joe Connor
|
Posted: Sep 04, 2016 12:01 AM
Share   Tweet
The opinions expressed by columnists are their own and do not necessarily represent the views of Townhall.com. 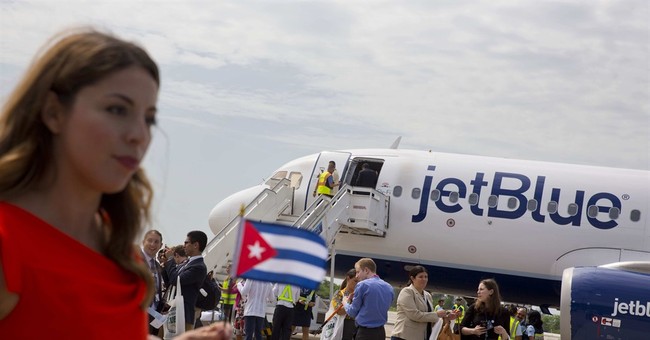 Among much fanfare, direct flights between the US and Cuba began this week.  With those flights will go billions of American dollars.

Infusing the hard currency of American tourism into the terrorist harboring, repressive, Marxist, Cuban state is hardly a reason to celebrate; at least not for Americans.

Billions that would otherwise have stayed in the US or have gone to other Caribbean nations, many of whom have been loyal American allies will now prop up a regime that has been our enemy for more than half a century.

In addition to its well documented history of antagonism against the US, for decades the murderous Castro regime has provided safe harbor to convicted terrorist bomber William Morales and BLA cop killer Joanne Chesimard among the 70 US fugitives currently in Cuba.

In 1973, as a leader of the Black Liberation Army, Joanne Chesimard (aka Assata Shakur) murdered New Jersey State Trooper Werner Foerster during a wild shootout after a routine traffic stop on the NJ Turnpike. She and a BLA comrade were captured, tried, convicted and sentenced to life in prison. Chesimard, with the help of other Marxist radicals of the time, escaped from prison in 1979 and were eventually welcomed by Cuba where she has been a guest of the Castro regime since the mid-1980s.

Morales was the chief bomb-maker and one of the leaders of the clandestine Puerto Rican terrorist group, Armed Forces for National Liberation (FALN), one of the most prolific terrorist organizations ever to wage war against the United States.

Between 1974 and 1983, the FALN claimed responsibility for over 130 bombings that killed six in the US and Puerto Rico, including the horrific January 24, 1975 bombing of New York’s historic Fraunces Tavern.  My 33-year-old father Frank Connor was murdered in cold blood in that savage attack. Morales most certainly built the sinister device that killed our father the very day our family was set to celebrate my 9th and my brother’s 11th birthdays.

Ironically, on what would have been my dad’s 37th birthday, July 12, 1978, Morales blew the fingers off of both his hands and part of his face when a bomb he was crafting exploded in his Queens bomb factory.

Morales was captured, tried and convicted in federal and state courts and sentenced in 1979 to up to 99 years in prison but escaped from Bellevue prison hospital with the assistance of related radicals who called themselves the Revolutionary Armed Task Force.

Through a FALN investigation run by the Chicago Terrorist Task Force, Morales was eventually located in Puebla, Mexico, in 1983. When the Mexican police closed in, he and an accomplice killed a Mexican police officer. Morales was arrested and charged with being an accessory to murder. Despite the Reagan administration’s request for extradition, the sympathetic Mexican government allowed him safe passage to Cuba in 1988.

Between 1981 and 1983, 16 core members of the FALN and Los Macheteros, a related terror group, were arrested, tried, convicted and sentenced to appropriately long prison terms.

Despite my regular correspondence with the Clinton departments of State and Justice (among others) beginning in the early 1990s demanding the return of Morales, in August 1999 Bill Clinton, with the assistance of then Deputy Attorney General Eric Holder, offered executive clemency to these unrepentant terrorists.

Disgracefully, clemency was clearly offered to ingratiate then first lady Hillary Clinton with New York’s Hispanic community as she planned her run for US senator from New York. These terrorists were so dedicated and unrepentant that took 30 days to accept freedom and one, leader, Oscar Lopez Rivera actually refused clemency. Twelve years later, in 2011, a small group of FALN victims and family faced Lopez at his parole hearing after which parole was denied.  Lopez remains a cause celebrity of the left with Hillary Clinton supporters including Illinois Congressman Luis Gutierrez and the number 2 in New York City Melissa Mark Viverito championing a second presidential clemency for this terrorist.

Where before Clinton and President Obama’s Attorney General Eric Holder released terrorists, now Obama and Democrat Nominee Hillary Clinton reward the Castros who protect terrorist fugitives from American justice, paying lip service to fighting a war on terrorists, as they refuse to bring justice to convicted terrorists like Morales and Chesimard.

This government fights no war on terrorists. It continues releasing or trading Islamic terrorist detainees from our Guantanamo Bay, Cuba facility, yet allows convicted terrorists like Morales and Chesimard to remain in Cuba. Our family is directly affected by both failures as our father’s godson, cousin Steve Schlag, was murdered on 9/11 as I witnessed the attacks from my nearby office window having just commuted through the World Trade Center.

As a 9/11 family member I spent a week in February of this year at Guantanamo Bay Cuba observing the pretrial hearings of Khalid Sheikh Mohammed and the four high value 9/11 detainees.  I saw arrogant terrorists who not only admitted, but bragged about their guilt for the 9/11/01 murders.  I saw a US Military Tribunal system dedicated to providing due process to terrorists whose notion of justice is a summary public beheading.

I saw the best of America at GTMO. Sadly at home I hear our President and Mrs. Clinton belittle and degrade the very people attempting to administer lawful justice; this coming from a president who “drones” suspects with no due process.

Americans must be aware of what is at stake here. We pump money into an illegitimate Marxist regime, effectively assisting Cuba in supporting convicted fugitive terrorists, giving away our prestige and receiving nothing but hostility in return.

I call on Hillary Clinton and Donald Trump, to join with me in demanding President Obama immediately secure these fugitives return and imprisonment and pledge no second clemency to terrorist Oscar Lopez Rivera.

My father’s life and premature death in the name of an illegitimate political cause has haunted my family for over 40 years. Now we have the chance to bring justice to the conspirators while furthering our war on terrorists.

My mother Mary told me last Christmas she always hoped she would live long enough to see Morales brought to justice.

This is our chance to grant her that wish.