Jerry Rogers
|
Posted: May 21, 2018 2:30 PM
Share   Tweet
The opinions expressed by columnists are their own and do not necessarily represent the views of Townhall.com. 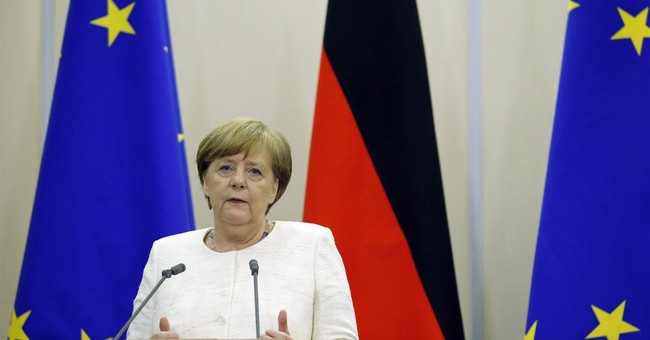 As the Trump administration contemplated withdrawing from the Iran deal, Germany’s government, led by Chancellor Angela Merkel, has pushed hard to keep the agreement in place. The nuclear agreement gave the radical regime access to billions of dollars in assets and foreign aid without placing restrictions on its support of terrorist groups.

The Trump administration is pursuing a better plan, it could include Germany if they’re willing to make security a higher priority than profit. But the Germans stood by the deal. Merkel publicly declared that Germany would do everything in its power to save it

“Germany will do all it can to persuade the United States not to abandon the Iranian nuclear agreement, whatever the outcome of German elections on Sunday, Foreign Minister Sigmar Gabriel said on Thursday.” (Reuters)

Now it’s clear why Germany went to bat for a nuclear agreement that put money in the hands of a government that funds terrorism: Germany was in a position to make piles of money with the sanctions against Iran removed. Siemens, the German mega-conglomerate, was planning to make billions in post-sanctions Iran:

“German engineering giant Siemens is set to finance infrastructure projects worth $3.5bn (€3bn) in Iran, according to the official PressTV news agency. Asghar Fakhriyeh-Kashan, deputy minister for urban development, said yesterday (7 August) that he had discussed Siemens’ participation in rail and power projects during his trip to Germany.” (Global Construction Review)

Siemens – whose CEO is also a vocal supporter of the Iran deal – even had a seat at the table when Merkel met with President Donald Trump at the White House. And the Germans weren’t just fighting to keep the deal in place – they were blatantly appeasing the regime in order to profit. German companies have refused to denounce the Iranian government for its anti-Semitism, hostility toward Israel, and even its denial of the Holocaust:

“United Against Nuclear Iran, or UANI, has petitioned more than a dozen major German companies, asking them to sign a declaration promising to not do business with Iran until its leadership stops denying the Holocaust and calling for the destruction of the Jewish state.”

“UANI maintains that no German company should engage in business with a nation that wholly denies the Holocaust, particularly in light of Germany’s chief role in the systematic murder of more than six million Jews.”

The Trump Administration reversed course on the Obama administration’s poorly-conceived nuclear agreement with Iran. They are now pursuing a new plan with a coalition that addresses Iran’s nuclear threat without funneling billions to its government. Germany could be a key partner in the coalition to contain Iran, but before they do, the German government and major German corporations will have to make security a higher priority than profit.