The Pilgrims Gave Thanks-Despite a Multitude of Difficulties

Jerry Newcombe
|
Posted: Nov 22, 2017 4:00 PM
Share   Tweet
The opinions expressed by columnists are their own and do not necessarily represent the views of Townhall.com. 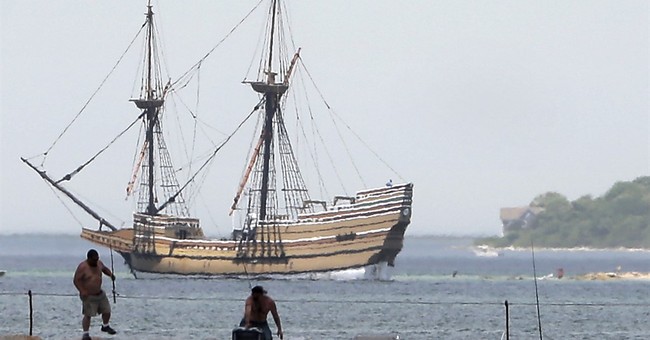 With another Thanksgiving upon us, it's good to consider what the Pilgrims endured and how they thanked God through it all.

I just finished reading a phenomenal book on the group of dissident Christians who founded Plymouth in 1620. Historian Rod Gragg wrote The Pilgrim Chronicles: An Eyewitness history of the Pilgrims and the Founding of Plymouth Colony (Regnery History, 2014). I thought I knew a lot about the Pilgrims, but this book added greatly to my knowledge.

The Pilgrims were one congregation that was born in mid-England around 1606 at a time where church meetings, apart from the Church of England, were illegal. Their goal was to worship Jesus in the purity of the gospel as they understood it. The Bible (Geneva version) was the focus of their existence.

Because of persecution in England, they decided to emigrate to Holland; but even leaving the mother country was a problem. A sea captain betrayed them, and several of their men ended up in an English jail. About 1609, they were able to finally make it to Holland.

Initially, the Netherlands was good for them. At least they could worship without government interference. But over time, they saw that some of their children were following the ways of the worldly Dutch youth. Meanwhile, the permanency of the Jamestown settlement in the New World allowed them to explore the possibility of coming to America to stay intact as a congregation and be able to worship Jesus in peace.

They borrowed money, and they received permission from King James, who was glad to be rid of them, to sail to the “northern parts of Virginia,” which at that time that would have been about where New York Harbor is today.

The voyage of the Mayflower was treacherous. One storm was so fierce they almost ended up on the bottom of the Atlantic.

When they finally came to the New World, they were 250 miles north of their target and unable to safely sail south. They made history by writing up a Christian agreement for self-government that they signed before disembarking. This Mayflower Compact was the first step in the eventual creation of the Declaration of Independence and the Constitution 150 years later.

Then came the hostile winter of 1620-1621, where illness, cold, and starvation killed about half of them. They slept mostly onboard the Mayflower, having little opportunity to build houses in the howling winter.

Of the 18 women on board the Mayflower, only four survived that winter. Half of the married men died. There were 29 unmarried men---of these, ten died, 19 survived. The children had the best survival rate. All seven girls lived. Of the 13 boys, three died, and ten lived. Yet through it all, they trusted in God and gave Him thanks.

The spring came early in 1621, and the deaths stopped. Two friendly Indians, able to speak English, came and greeted them and helped them make peace with the Indians and learn how to plant corn and capture eels to survive. The Pilgrims enjoyed a great relationship with the Native Americans---including making a peace treaty that lasted for about 55 years and was brokered by Chief Massasoit.

At harvest time in 1621, the Pilgrims gave thanks to God and enjoyed a three-day feast with the Indians. This was the beginning of our Thanksgiving celebration in America.

Gragg quotes John Pory, a scholar from England who had served in the colony of Virginia, who was on his way back to England. Having visited Plymouth in 1622, Pory wrote: "the reasons of their continual plenty for those 7 months in the year may be the continual tranquility of the place, being guarded on all sides from the fury of the storms, as also the abundance of food they find at low water….Now as concerning the quality of the people, how happy were it for our people [in Virginia], if they were as free from wickedness and vice as these are in this place.... As touching their correspondence with the Indians, they are friends with all their neighbors.”

Gragg also quotes Pilgrim leader Edward Winslow, who said, “[N]one will ever be losers by following us so far as we follow Christ.”

Rod Gragg (p. 288) concludes on the Pilgrims’ settlement, "And they had succeeded. No one in America would be raiding their Sunday services to stop their worship. Neither would they be hauled off to jail because of their beliefs, nor ever again forced to flee their homes because of their faith. And the way of freedom they had blazed in the wilds of the New World would eventually become the path of liberty for countless people from around the world: people yearning for a new life, a new start, a new home---and who would find it as Americans.”

Unpopular: New Poll Packed With Extremely Bleak News for Biden and Democrats
Townhall
Jussie Smollett attorney's closing argument to the jury 'isn't the defense they think it is'
Twitchy
It's Over for Kamala
Redstate
Jussie Smollett Gets Destroyed During Cross Examination
PJ Media