Is There a Link between Darwin and WWI? 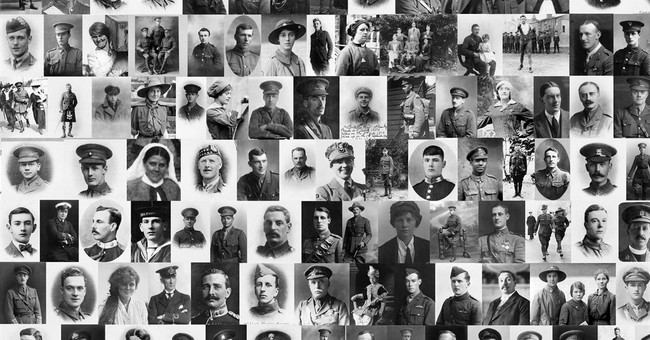 Quick quiz: What started World War I? An anarchist in Serbia shot and killed a visiting Austrian leader. But why would that shooting trigger the killing of millions, including one out of two young Frenchmen, in what we now know as World War I, which began a hundred years ago?

In his 1992 book, A History of the American People, British historian Paul Johnson writes, “The Great War of 1914-18 was the primal tragedy of modern world civilization, the main reason why the 20th century turned into a disastrous epoch for mankind” (p. 642).

A series of conflicting European alliances led to the bloodbath when the tinderbox was ignited.

Johnson explains how the shooting of the Archduke Franz-Ferdinand of Austria (6/28/1914) led to “the Austrian ultimatum to Serbia, the Russian decision to support the Serbs, the French decision to support Russia, the German decision to support Austria and fight a two-front war against Russia and France, and Germany’s consequential decision to send its armies through Belgium to enforce quick defeat of the French, and so the involvement of Britain and its dominion allies in support of Belgium” (p. 642).

World War I led to the deaths of millions of people---with millions more dying of a flu epidemic in the immediate wake of its devastation. Consider other consequences of WW I:

*the Russian Revolution, i.e., the collapse of czarist Russia and the rise of the Soviet Union, leading to the death of 20-40 million Russian people (in peace time).

*the end of the Ottoman Empire, which led a later secularized Turkey in 1924 to abolish the caliphate (which was not necessarily a bad development). Those events impact even our current situation. Al-Baghdadi, leader of the murderous ISIS/ISIL at the time of this writing, is viewed by his followers as the new caliph for the Muslim people.

*World War II. The winners after WW I made the armistice conditions so terribly difficult for the Germans in the Versailles Treaty that they sowed the seeds for WW II at the end of WW I. World War II soaked the globe in blood, killing some 55 million people.

*In the wake of WW II, Chairman Mao turned China into an atheistic Communist state, killing some 72 million Chinese in the process. This led to the fall of Vietnam, Laos, and Cambodia.

By any measure, World War I was a disaster for humanity, underscoring the depravity of man.

But could there be an additional factor in the causes of World War I that has been overlooked?

Dr. John West, senior fellow at the Discovery Institute of Seattle, says: “Historians continue to debate the causes of World War I, which were complex.” West has directed a new film, “The Biology of the 2nd Reich,” which highlights a link between Darwinism and the great war.

West states, “Social Darwinism was certainly one of the key issues that exerted a profound influence on German militarism before, during, and after the conflict.”

The film can be seen on-line at darwintohitler.com, a website that deals with the “impact of Social Darwinism in Germany.” The historian behind the website is the key guest in the video, Dr. Richard Weikart, a first-rate historian on 20th century Germany.

Weikart wrote From Darwin to Hitler: Evolutionary Ethics, Eugenics, and Racism in Germany (Palgrave MacMillan, 2004), which shows the not-so-missing link between evolution and the rise of the Nazi scheme to clean up the gene pool (as they saw it) in order to create a master race of pure Aryans. Jews need not apply. Nor gypsies, Slavs, dissenting Christians, etc.

Weikart is Professor of History at California State University, Stanislaus. I interviewed him for our 2006 TV special, hosted by the late D. James Kennedy, “Darwin’s Deadly Legacy.”

Said Weikart, “Natural selection was the guiding idea for Hitler and the Nazis….the term [selection] was related directly to Darwinian terminology that when you went to the camps, you went through a selection process. They were selecting this person to survive and this person to go to the gas chambers.”

The new film, on Darwin and WW I, quotes Charles Darwin: “The support which I receive from Germany is my chief ground for hoping that our views will ultimately prevail.” The film shows the link between Darwinism and German militarism, including genocide the Germans committed against a tribe in one of their African colonies.

The film quotes Hitler, who later set out to finish the work begun in WW I: “The law of selection exists in the world, and the stronger and healthier has received from nature the right to live. Woe to anyone who is weak, who does not stand his ground! He may not expect help from anyone.”

Weikart notes that neither Darwin nor his immediate followers were anti-Semitic per se. But their ideas just made it all possible. A hundred years later, we’re still living with the consequences of some of those ideas, including their indirect contribution to World War I.