How Could You Behead a Child? 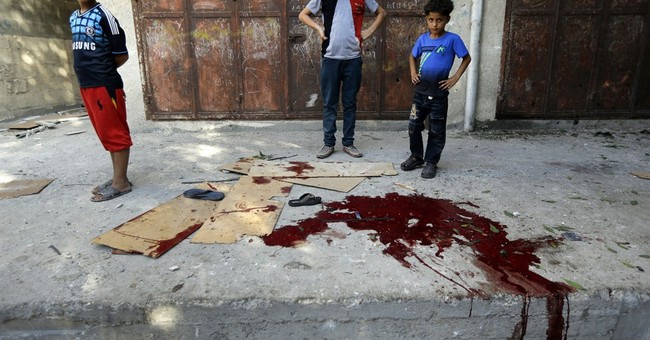 There have been numerous and sometimes contradictory stories and images of anti-Christian slaughter coming out of Iraq and Syria right now. They cannot all be confirmed. But there is a pattern emerging: Even children are not immune from the barbaric acts of radical Muslims.

I saw a photograph that makes me sick. It is the corpse of a little girl, about ten years old, wearing a dress and leotards. She lies sprawled on the floor with her arms outstretched. For a presumably poor girl, she looks like she’s dressed in her Sunday best.

Everything about her looks normal, except that her head is gone. This photo makes you sick. It's right out of a horror movie. Something within you dies when you look at it.

Some have reported this is a Christian girl in Iraq deliberately beheaded by ISIS. Others report a different scenario for her death. I can’t verify it. But either way radical Islam killed her.

How could you kill a child? And more importantly, how could you do so in the name of God? As of this writing, Christians continue to be killed in Iraq simply because they won’t convert to Islam. It is convert, pay a strict tax, flee, or die. In some cases, just convert or die.

In one sense, this is not new. Radical Islam has been on the march since 632. Most of the population of the land they conquered and forced conversions or killed the conquered were Christians. I remember reading that by about 950 AD, 50% of what had been Christendom was under Muslim control, and the vast majority of it has never reverted back.

But some leaders of Islam are more barbaric than others.

The current crop of ISIS leaders is particularly barbaric. ISIS refers to the Islamic State of Iraq and Syria. They are intent in re-creating the caliphate in the Middle East. Their spokesman said they won’t stop until they fly the black flag of Islam over the U.S. White House.

Jesus said to His followers that the day will come when men will kill you and think they are offering a service to God. They are deceived in thinking that God is pleased with this offering.

The irony is that technically Islam teaches that Muslims will one day stand before whom on the Day of Judgment? Answer: Jesus. They teach that He will return one day. But they also teach the first thing He’ll do is destroy all the crosses. They certainly don’t believe in Jesus as Lord.

Furthermore, the radical Muslims think that by killing Christians Allah is somehow pleased.

Saul of Tarsus thought he was pleasing God by being party to the stoning of the first Christian martyr, Stephen. Before he was converted to Christ on the road to Damascus, Saul was breathing out murderous threats to innocent Christians. He threw some in jail---in some cases, they may well have died there---thus, perhaps depriving their families of food and other necessities.

Saul was a religious terrorist. Saul did what he did (though not so stark as beheading) because he thought this was God’s will for him to do.

But he saw a bright light and heard a voice asking, “Saul, Saul, why are you persecuting Me?”

“Who are you, Lord, that I am persecuting You?” Of course, the answer was Jesus.

Saul went on to become the Apostle Paul and did probably as much as any human being to spread Christian love around. For him, there was no more killing of Christians after that. Paul himself was beheaded for his Christian activities by Nero, who was deposed in 68 AD.

Saul’s / Paul’s life shows one thing: Even a religious terrorist with blood on his hands can be converted to Jesus. Meanwhile, radical Muslims are killing Christians in many places.

Rev. Julian Dobbs, who heads the Church and Islam Project of the North American Convocation of Anglicans, once told me, “too often in places where there was a relative peace, Christians, our brothers and sisters, are now living with the regular threat and challenge of persecution and suffering for their faith.”

Robert Spencer of www.jihadwatch.org once told me, “In the Koran and in the teachings of Mohammed and in Islamic tradition of theology and law, there are mandates commanding Muslims to wage war against unbelievers.” For example, see Surah 9:29.

I once asked him, “Why would they kill an innocent child?” He responded, “This is something that is actually mandated by Islam; the Koran says in Chapter IX Verse 123 to ‘fight the unbelievers and let them find a harshness within you.’”

A harshness indeed, like the kind that could kill innocent Christians, even children, in Iraq and Syria. This barbarism should be a wake-up call to the West.