Winning in the Wake of a Trump Dominated Super Tuesday

Jeremiah Cuevas
|
Posted: Mar 03, 2016 12:01 AM
Share   Tweet
The opinions expressed by columnists are their own and do not necessarily represent the views of Townhall.com. 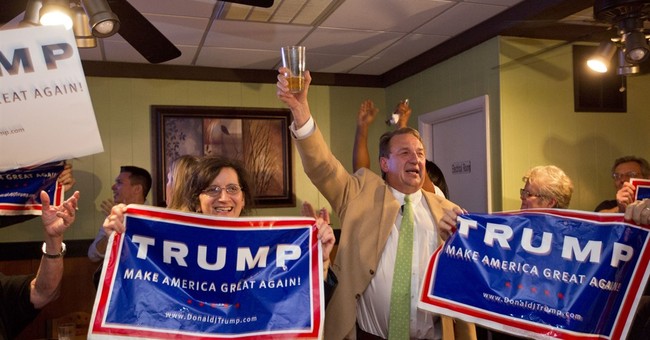 Super Tuesday proved that the rise of Trump is not a fluke. In the words of his most recent and notable supporter,New Jersey Gov. Chris Christie, "this has become a movement." The establishment is in an uproar. Sen. Marco Rubio under performed. The promising young gentleman fromFlorida only took one state. As much as the one who many are calling the leading establishment candidate may hate it, this is not his year. Perhaps it's time for Sen. Rubio to display the same measure of class that his mentor, former Florida Gov. Jeb Bush displayed when he heeded the clear message  Americans are sending, "this is the year of the outsider."

Sen. Rubio has a strong career ahead. For him to suspend his candidacy would set him up to do a great service to the nation. He and  Texas Sen. Ted Cruz have had a back and forth for sometime now,trying to make the case that they are the best to beat Trump and Hillary. Thus, far Ted Cruz has come out on top.

Donald Trump has established that he may be the candidate to appeal to both moderates and even many blue collar Democrats. SomeRepublicans have been saying for years that perhaps it's time to rebrand the party, but will Trump take the party in a direction that is good for the party's values?

"People say that I am a divider, but I really a unifier. I am a unifier." Were Trump's words in a press conference while Super Tuesday votes were coming in. Rebranding the party after a Donald Trump nomination looks like a party that is pulled sharply to the left, fueling the same class warfare that Democrats have been throwing gasoline on since the 60s. Small Constitutional centered government, and equal rights under one rule of law,these original Republican values would be lost in the shuffle. America would effectively have two liberal parties, a Democrat and a Democrat lite. The single factor that accounts forDonald Trump's ability to hold this level of sway is the number of candidates in the field.

If you examine the delegate count: Trump 285, Cruz 161, Rubio 87, Kasich 25, and Carson 8; it is plain to see that Trump does have a commanding lead. Why? The people are angry, and want an outsider. The only candidates to attain a gold or silver this entire race have been outsiders.

Late last year we saw the race start to take shape. Until December it was Trump and Carson taking the number 1 and 2 spots.The single thing that the two have in common, they are outsiders. In the new year this trend continued, only voters started looking for stronger candidates to represent the party. They wanted to get behind someone who could take the fight to Hillary and was not entwined with the establishment.

Trump and Sen. Ted Cruz have held the top two spots ever the Iowa Caucus. Say what they will about Ted Cruz,  with Iowa, Oklahoma, Alaska, and Texas under his belt, he has proven that he has had the most success when it comes to beating Donald Trump. He is the only candidate with a clear path to victory against both Donald Trump and more importantly Hillary Clinton,according to polling by CNN, Fox News, Quinnipiac, and USA Today, and perhaps most importantly the voters.

Of course many of these same polls have most of the Republicans beating Hillary, with the exception of Donald Trump, and Carson who consistently lose to Hillary. However, facing facts in order to get Hillary alone on the debate stage a candidate must beat Donald Trump.

As we look forward to the general election, Trump is right we need to unify the party. But, we must unify behind the single candidate that will both win the general election, while keeping our conservative values intact. At this point besides narrowing the field behind the number 2 candidate, nothing short of the resurrection of either Ronald Reagan, or Abraham Lincoln,will stop a Trump nomination. If the other candidates are serious about service to the country, and doing what's best for America they need to suspend their campaigns before any more delegates are assigned.