Jeff Jacoby
|
Posted: Sep 01, 2016 12:01 AM
Share   Tweet
The opinions expressed by columnists are their own and do not necessarily represent the views of Townhall.com. 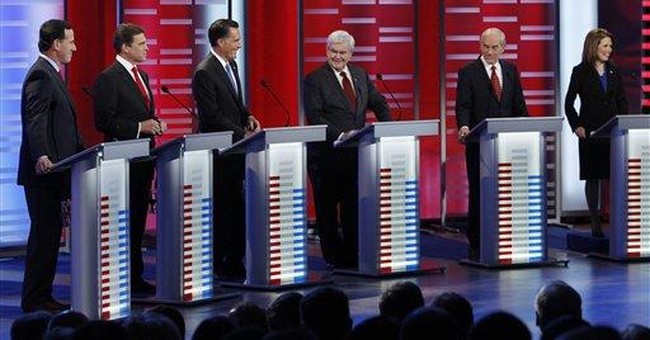 Trending
A few days before the 2012 election, a Colorado woman posted on YouTube a video of her 4-year-old daughter, Abigael, who had burst into tears after hearing one too many stories about the race for president. "I'm tired of 'Bronco Bamma' and Mitt Romney," sobbed the little girl, a picture of utter misery. Abigael's despair plainly touched a nerve. The 21-second video went viral, and was viewed more than 17.2 million times.

This column is for Abigael — and for everyone else made wretched by the grueling, despair-inducing length of American presidential campaigns.

Why do we do this to ourselves?

In no other nation on earth do candidates for national leadership devote as much time to running for office. Political ambition and a taste for power exist in every society and era. But the insanity of marathons for the White House that last nearly two years is uniquely, humiliatingly American.

I'm as ardent an American exceptionalist as they come, but not everything we do is an improvement on the way others do it. US presidential hopefuls now formally kick off their campaigns 20 months before Election Day. Televised debates and forums among contenders for their party's nomination now begin at least a year before the nominating convention. Candidates' ads now hit the airwaves eight months before any votes are cast in even the earliest caucus or primary states. With even little girls being reduced to tears by the endless drip-drip-drip of campaign coverage, our political-industrial complex is headed for a meltdown.

Laments about the length of American presidential campaigns aren't new, of course. "Is The Presidential Campaign Too Long?" asked Time magazine in a 1960 headline. The consensus of the politicians and historians that Time consulted was not just that campaigns were absurdly drawn-out, but that America's interests in the world were suffering as a result. It quoted "sagacious old Konrad Adenauer," the great West German chancellor and close US ally, who observed that America's obsessive presidential politics imperils its friends.

With public attention in the United States "increasingly preoccupied with domestic affairs," Adenauer warned, "it is not excluded that Khrushchev will take advantage of this period for his designs." Change "Khrushchev" to "Putin," "Khamenei," or "Islamic State," and Adenauer's observation is as worrisome in 2016 as it was in 1960.

If not more so. Time pegged the start of the too-long presidential campaign to "the first, frosty preprimary campaigning in February" of the election year. These days, that's the midpoint of the race. Hillary Clinton publicly kicked off her 2008 candidacy in January of 2007. Republican candidates for the 2012 GOP nomination had already held 19 televised debates by the time frosty February rolled around. In Eisenhower's time, presidential politicking distracted America for the better part of a year? If only we had it so good today.

To repeat: No other nation puts itself through this. Canada's recent election campaign, decisively won by Justin Trudeau's Liberal Party, lasted a grand total of 78 days — the longest in Canadian history, but a blink compared with what Americans must endure. In Mexico, an election season lasts 150 days, start to finish. Britons are accustomed to election campaigns that consume five or six weeks.

The preposterous duration of US campaigns might be justifiable if it generated off-the-charts enthusiasm and voter participation. But it does just the opposite. Long before election day, Americans tell pollsters that they are sick and tired of the whole thing. And when the time to cast a ballot finally arrives, US voter turnout is among the lowest in the world.

Pretty much everything that's rotten with presidential campaigns — from the obscene sums spent by candidates to the relentless character-assassination of political ads — is a function of their interminable length. Presidential campaigns weren't this endlessly exhausting in the past, and they don't have to be in the future. How they could be reformed is a subject for a future column. Stay tuned.