Jeff Jacoby
|
Posted: Mar 07, 2016 12:01 AM
Share   Tweet
The opinions expressed by columnists are their own and do not necessarily represent the views of Townhall.com. 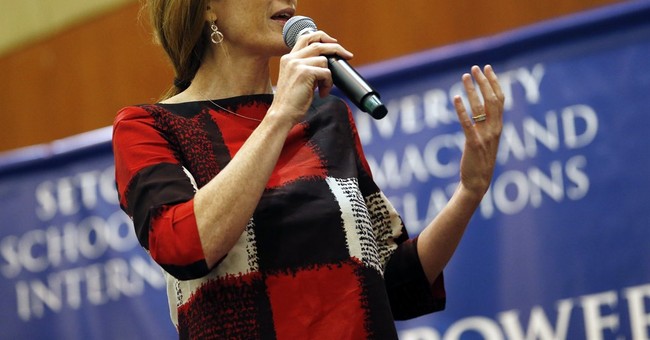 On July 18, 2013, the UN's Independent International Commission of Inquiry on Syria issued a report on the savage war crimes being committed by the regime of Bashar al-Assad.

"Government forces and affiliated militia have committed murder, torture, rape, forcible displacement, enforced disappearance, and other inhumane acts," the report said. "Many of these crimes were perpetrated as part of widespread or systematic attacks against civilian populations and constitute crimes against humanity." Assad's forces were methodically starving civilian populations and deliberately bombarding hospitals, the commission reported. Torture had become "endemic," with prisoners having "boiling water poured on them and electric shocks administered."

At the time, the death toll in the Syrian war was estimated at 100,000, and there was reason to believe that the Assad regime's brutal campaign to wipe out civilian Sunni populations amounted to genocide.

About two weeks after the release of the UN report, Samantha Power was sworn in as US ambassador to the United Nations. Power, a foreign-policy adviser to Barack Obama and a former journalist, had literally written the book on genocide: She won the Pulitzer Prize for A Problem From Hell, a sweeping history of America's repeated failure in the 20th century to stop the world's monsters from committing mass murder. Power documented how time and time again — from the extermination of the Armenians during Woodrow Wilson's presidency to the Nazi Holocaust in FDR's time to the Rwandan slaughter in the Bill Clinton years — American leaders had known that horrific bloodshed was occurring, but could never muster the political will to stop it.

Power's appointment to the UN post was sharply criticized by many administration opponents. I applauded it. Having read her book, I was sure she could be counted on to raise a moral outcry when mass atrocities and genocide occurred. I knew she would never accept US passivity or indifference when innocents by the scores of thousands were being annihilated in killing fields. I was encouraged that Obama, whose leading-from-behind foreign policy had proven so ineffectual, had turned to an ambassador best known (as I wrote at the time) for her "powerful refutation of the idea that the world becomes a safer place when America retreats from the global stage."

But I was wrong.

Within weeks of Power's installation as ambassador, Assad unequivocally crossed the "red line" — the use of chemical weapons — that Obama had warned would trigger a decisive US response. When that response never came, the new ambassador voiced no dissent.

Syria's ethnic cleansing persisted. The death toll rose, with Hezbollah, then the Russians, entering the war and abetting the slaughter. By now at least 370,000 lives have been destroyed, according to the Syrian Observatory for Human Rights; nearly five million Syrians have become refugees. It is the worst humanitarian disaster in decades, yet Obama has steadily refused to take concrete actions that could have halted Assad's butchery — arming rebel fighters, creating and enforcing no-fly and safe zones, and ordering the US military to stop Assad's indiscriminate barrel-bomb attacks. Power has occasionally mentioned Syria in speeches and tweets; she once invited a family of Syrian refugees to dinner. Mostly, though, she has acquiesced in the president's unwillingness to act.

The rise of Islamic State, meanwhile, has unleashed fresh horror. ISIS has embarked on campaigns to exterminate Kurdish and Iraqi Yazidis, Syrian Alawites, and Assyrian Christians; it has beheaded, crucified, and enslaved thousands of Shiites and even some Western captives. The response from the Obama administration: a desultory campaign of airstrikes, a vow to "ultimately" destroy the killers — but always coupled with a firm refusal to deploy the ground forces that would be the fastest way to demolish ISIS and stop its murderous rampage.

"Despite graphic media coverage, American policymakers, journalists, and citizens are extremely slow to muster the imagination needed to reckon with evil," Power wrote in A Problem From Hell long before she entered public life. "They trust in good-faith negotiations and traditional diplomacy. . . . They urge cease-fires and donate humanitarian aid." The Obama administration, it turns out, is only the latest to replicate the pattern, and Power's presence seems to have changed nothing.

Throughout her book, Power singled out for praise the few government figures who wouldn't keep silent in the face of genocide. Henry Morgenthau, the American ambassador in Turkey in 1915, vainly urged Washington to dispense with etiquette and openly denounce the "race murder" of the Armenians. Eight decades later, State Department officers Marshall Harris, Jon Western, and Stephen Walker publicly resigned to protest the Clinton administration's feeble reaction to genocide in the former Yugoslavia. But not many have the guts to lay their career on the line. "The few who depart on principle are excommunicated" for their "betrayal," wrote Power in her book. "US foreign policy lore is not laden with tales of the heroic resignee."

On President Obama's watch, a minor conflict in Syria metastasized into a genocidal war zone. Hundreds of thousands of lives have been destroyed — lives that could have been saved, if saving them had been important. But "no American president has ever made genocide prevention a priority." Samantha Power wrote those words in her book. Now, high up in the Obama administration, she personifies them.