Gender is No Credential for the White House 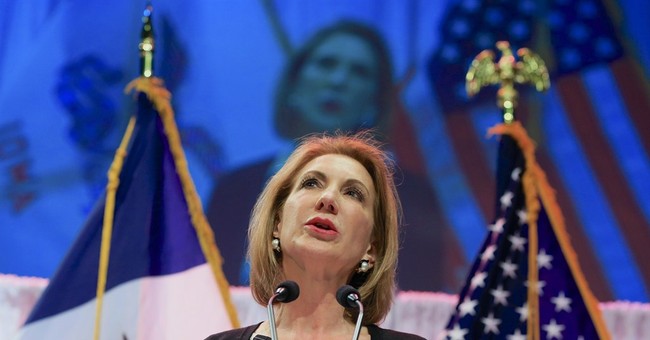 REPUBLICAN Carly Fiorina announced her candidacy for president this week, making her the second woman to join the 2016 race — the other, of course, being Democrat Hillary Clinton. Fiorina, the former CEO of Hewlett-Packard, is considered a long shot for the GOP nomination, while Clinton is widely seen as a shoo-in for the Democrats. But who knows? The first caucuses and primaries are still many months off, and in politics anything can happen.

This early in the presidential cycle, I make no predictions about how the race will play out. But one thing I'm sure of: America doesn't need to send a woman to the White House.

Needless to say, many Clinton supporters vehemently proclaim the opposite.

"Hillary Clinton Is Running For President, And I'm Voting For Her Because She's A Woman," reads the headline on a long essay by Gabrielle Moss in Bustle magazine. House Minority Leader Nancy Pelosi, asked whether Clinton's vote for the Iraq War should disqualify her from the support of progressive Democrats, responds that "what's important is what it would mean to elect a woman president of the United States." Never mind old controversies, Pelosi suggests; Clinton's sex is what should animate voters now.

Making the point even more graphically is writer Kate Harding in the web journal Dame. "I intend to vote with my vagina," Harding declares, embracing Clinton's candidacy on the grounds that the United States has never had a president "who knows what it's like to menstruate, be pregnant, or give birth."

There was a time when Clinton purported to reject such gender-based appeals. "I am not running as a woman," she told voters during her last campaign for president. Now she plays it up for all it's worth. "Don't you someday want to see a woman president of the United States of America?" she pointedly askedattendees at an EMILY's List gala.

So far Fiorina has declined to treat biology as a credential for high office. Elections should not be based on "identity politics [or] what you look like," she says, telling journalists she won't let Clinton "play the gender card." Yet that won't keep at least some Republicans from supporting Fiorina — especially if her candidacy catches fire — with the claim that "it's time for a woman president."

Of all the qualifications to seek in a US president, few could be more irrelevant to the job than sex organs. Whether the leader of the free world is equipped with the anatomical parts of a male or of a female is of infinitely less significance than whether that leader is equipped with integrity and sound judgment, with respect for facts and loyalty to the Constitution. No rational person looking to hire a violinist or copywriter or ophthalmologist would let that choice hinge on "know[ing] what it's like to menstruate, be pregnant, or give birth." What rational voter would make that the test of fitness for the presidency?

It should go without saying that candidates' political skill, wisdom, and vision are no more dependent on their sex than on the color of their skin, the shape of their eyes, or their ancestors' come in all varieties. So can the worst. Reducing an electoral choice to a physical characteristic trivializes self-government and the responsibilities of citizenship.

Of course voters are free to cast ballots for any reason they like, including feel-good symbolism or sentimental tokenism. But no one should imagine that there is honor in voting for Clinton because she's a woman. Wasn't the whole point of feminism, after all, that woman are more than biology?