An 'LBJ law' for Kentucky? 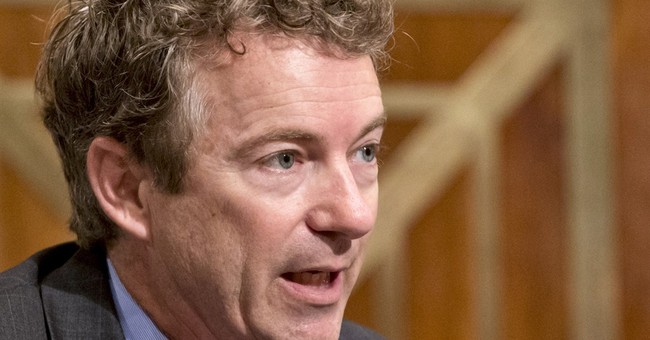 "My policy on cake," the ebullient Tory mayor of London, Boris Johnson, once remarked, "is pro having it and pro eating it." Rand Paul, the Kentucky senator and potential GOP presidential aspirant, has hopes of embracing a similar policy on running for office. Kentuckians, to their credit, aren't buying it.

Paul was elected to the US Senate in 2010, and he has said clearly that he intends to run for reelection in 2016. But almost from the moment he took office, he has also shown every sign of wanting to run for president in 2016. And that poses a problem: Kentucky law explicitly bars individuals from running in a regular election for two offices simultaneously: "No candidate's name shall appear on any voting machine or absentee ballot more than once."

As it happens, Paul isn't the only Republican senator contemplating a White House run whose seat is up for reelection in two years. Ohio's Rob Portman and Florida's Marco Rubio are in the same boat, and both have acknowledged plainly that they have to make a choice.

During a visit to Manchester, N.H., last month, Portman ruled out any option of campaigning for president and the Senate at the same time. Under Ohio law, it might be legal to do both, he told RealClearPolitics, "But I wouldn't. I think you need to focus." As for Rubio, he applauds the election rules in Florida, like those in Kentucky, that bar candidates from appearing on the same ballot for two different offices. "That's the right law," Rubio said in a radio interview in April. "I think, by and large, when you choose to do something as big as that, you've really got to be focused on that and not have an exit strategy."

But the Tea Party star from Kentucky, who blazed onto the national scene denouncing "career politicians" and vowing to uphold "Kentucky values," would rather not have to choose.

Unlike Rubio, Paul isn't praising the wisdom of Kentucky's one-campaign-at-a-time statute. Instead he and his allies have tried assiduously to overturn it. The Washington Times reported in March that Paul was lobbying Kentucky legislators to pass a law clearing the way for him to eat that cake and still have it. The GOP-controlled state Senate complied. After all, said the majority leader, "Senator Paul is very popular here, and I personally don't want to deny Kentuckians the chance to vote for or against one of their own for the Senate if he's also nominated for the presidency."

But the bill has gone nowhere in the Kentucky House of Representatives, where Democrats rule the roost.

"Our position is that a man who can't decide which office to run for isn't fit for either office," the House speaker has said. "I don't think that bill will ever see the light of day as long as I hold the gavel." Which would explain why Paul has been vigorously raising funds for Republicans running for the Kentucky state legislature. And why some of his political advisers are even making noises about challenging the current law as unconstitutional.

Manipulating state election law to boost a party favorite — especially ahead of a presidential campaign — isn't an innovation. In 1959, Lyndon Johnson got the Texas Legislature to pass just the kind of law Paul has pushing for in Kentucky. It freed him to run the following year both on the presidential ticket and — just in case — for reelection to the Senate at the same time. Other politicians — among them Connecticut Sen. Joe Lieberman in 2000, Delaware's Joe Biden in 2008, and Congressman Paul Ryan of Wisconsin in 2012 — have exploited similar "LBJ laws" and done the same thing.

But at least Kentucky voters have more self-respect than to let one of their US Senate seats be treated as if it were a high school senior's safety school, to be ditched if a more ambitious option comes through. According to a recent Bluegrass Poll commissioned by a consortium of Kentucky news media, only 15 percent of state voters would like to see Paul on the ballot for both president and senator in 2016. Fully two-thirds of respondents say the existing law should not be changed. That sentiment crosses party lines: 54 percent of Republicans, 57 percent of independents, and 78 percent of Democrats oppose an "LBJ law" in Kentucky.

It didn't take long, it seems, for Rand Paul to lose touch with those grassroots "Kentucky values" he was supposedly so attached to. The candidate who held himself out as unpredictable and unorthodox, the courageous truth-teller who was heralded as different from conventional politicians, is barely halfway through his first term in the Senate, yet already is so hungry for more that he schemes to change ballot rules standing in his way. Mr. Paul went to Washington, but he's no Jimmy Stewart.