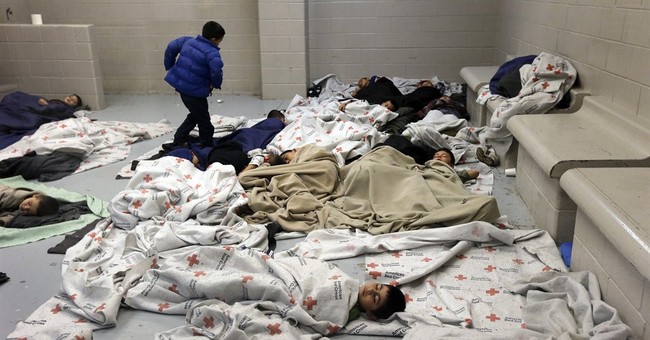 It was billed as a "Stop the Invasion" rally, and it drew thousands of protesters to the steps of the State House on Saturday. Outraged by Governor Deval Patrick's proposal that Massachusetts shelter some of the unaccompanied minors from Central America who have been surging across the border, the crowd chanted: "Send them home! Send them home!"

Massachusetts may be a liberal Democratic stronghold, but these protesters were no fringe phenomenon. According to a new Boston Globe poll, 43 percent of Bay State voters, a plurality, say the children should be deported. Similarly, 43 percent oppose Gov. Patrick's offer to temporarily house 1,000 young migrants in a state air base. Asked whether any state funds should be spent to take care of the children, 57 percent answer no.

Much of the rhetoric at the Beacon Hill rally was unhinged. "Our government sees no difference between law-abiding, freedom-loving, taxpaying citizens and lawbreaking aliens," said Mark Fisher, a Tea Party conservative running for the Republican gubernatorial nomination. Radio talk host Jeff Kuhner inveighed against "these gangsters in the governor's office and the Oval Office" who want to "turn Massachusetts into Mexi-chusetts" and the United States into "a socialist Third World banana republic."

But even if the speeches were over the top, there is little reason to question the sincerity and patriotism of the protesters. They cheered as speakers invoked the sacrifices made by earlier American generations, and ended the rally by singing "God Bless America."

Savor the irony: The composer of "God Bless America" was Irving Berlin, who came to America as a 5-year-old when his family, then named Baline, fled Russia in 1893 to escape life-threatening pogroms. As an adult, Berlin had no memories of his early childhood in Russia except for the terrifying attack that drove his parents to emigrate. According to his biographer, Berlin recalled "lying on a blanket by the side of a road, watching his house burn to the ground. By daylight the house was in ashes." The Balines, like hundreds of thousands of other immigrants fleeing some of the most dangerous places in the world, swarmed into the United States, whose gates were still wide open, as they would be until the 1920s.

"God Bless America," originally composed in 1918, is a love-hymn by an immigrant to his adoptive country, a former child refugee who never ceased being grateful for the safe haven America afforded him. What would Berlin have thought of protesters in 2014 singing that song as they demand the expulsion of other desperate children flocking to America from other dangerous homelands?

My guess is that he would have been distressed but unsurprised. Nativist and anti-immigrant feelings have always seethed in America, and the arguments for keeping outsiders out haven't much changed since Berlin's day.

"If we have any regard for the welfare, the wages, or the standard of life of American workingmen, we should take immediate steps to restrict foreign immigration," Senator Henry Cabot Lodge of Massachusettsdeclaimed in 1896. "There is an appalling danger to the American wage earner from the flood of low, unskilled, ignorant foreign labor which has poured into the country…. The gates which admit men to the United States and to citizenship … should no longer be left unguarded."

Lodge and other nativists in the 1880s and '90s warned that the immigrant waves threatened not just American prosperity, but also American democracy, individualism, and morality. Had they prevailed, there would have been no Irving Berlin and "God Bless America." And, it's safe to assume, many of the Beacon Hill protesters chanting "Send them home!" would have never known life in America either.

Today's anti-immigration advocates sometimes claim to oppose only "illegal" immigrants, a specious distinction that didn't exist for most of American history. Or they say they object only to the immigration-driven cost of welfare and public services, or to the nation's border not being secure, or to the refusal of immigrants to assimilate. Or they blame foreign governments for exporting undesirable people to the United States. Or they argue, meaninglessly, that America already has enough people, and can't be a refuge for everyone.

But the same things, more or less, were said 50 or 100 or 150 years ago by earlier generations of nativists. Then it was said about immigrants from China, Italy, and Russia. Now it is said about those from Honduras, Guatemala, and El Salvador. "Stop the invasion!" the protesters demand. What they're really saying is: We got here first, and we don't need any more of your kind.