Martin Luther King, Jr. and the Infallibility of Leftist Idols

Jeff Davidson
|
Posted: Jan 18, 2021 12:01 AM
Share   Tweet
The opinions expressed by columnists are their own and do not necessarily represent the views of Townhall.com. 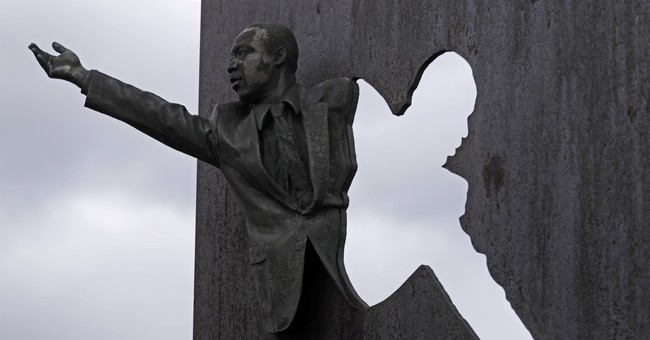 With the election of Joe Biden, the Hollywood "elite" are dancing in the street. As during the Obama Administration and the Clinton Administration before that, they are giddy about the prospects of visiting the White House, attending State dinners, and having a personal, warm, and oh so special relationship with the new president.

While the Left remains eager to identify, dissect, catalog, and endlessly detail the many, many faults of Donald Trump (real, imagined, or concocted out of whole cloth), they deny or downplay a mountain of misdeeds by Biden, as they also did with Obama and Clinton.

The Left issues free passes to Biden for the legions of transgressions in his life. They overlook that he cheated in college, cheated in previous political campaigns, is a serial liar, and worse. They contort or censor news that he has made racist statements for his whole political career; e.g., "If you have a problem figuring out whether you're for me or Trump, then you ain't black."

The Left ignores Tara Reade's credible sexual assault accusation against Joe Biden. They pretend Biden doesn’t have a fetish for sniffing little girls’ hair and that he doesn’t invade the personal space of females with reckless abandon.

The Left ignores documentation showing the Biden family received multi-millions of dollars via influence peddling to Communist China, as well as from Russia, Kazakhstan, Romania, and especially Ukraine. They overlook that Biden has been an enabler for both his brother James and his son Hunter and that Biden is credibly accused of selling out the U.S. The Left especially avoids referring to any signs that Biden is suffering from ever-worsening dementia.

We Are All Flawed

The Left apparently forgives Biden for his multiple instances of plagiarism, which brings us to Martin Luther King, Jr. King was a great man by any stretch, and his speeches still ring true. No one on the scene, in 53 years, has taken up the mantle of MLK. His words, to this day, serve as guideposts to liberty and justice for all.

As with many icons in society, MLK was a highly flawed man. By numerous accounts, he “had engaged in so many extramarital affairs that his wife, Coretta Scott King, had reportedly become disillusioned with their marriage.”

As documented by major "progressive" newspapers as well as the institution that bestowed him with his doctorate, MLK plagiarized large sections of his doctoral thesis.

Boston University has gone on record admitting the transgression; what’s more, the university knew of this at the time. Yet, they awarded him a doctorate anyway. He was, after all, an otherwise promising student, and Boston University was pleased to have had him in its program.

MLK is held up to be the greatest civil rights leader of our time. The U.S. celebrates his birthday on January 19, as a federal holiday, while relieving George Washington and Abraham Lincoln of such distinction and instead offering the under-acknowledged "Presidents’ Day." Nearly every city has a Martin Luther King, Jr. avenue or boulevard. Hundreds of communities have named schools, libraries, community centers, and social and civic institutions after him.

Nonetheless, should somebody who cheated to gain academic distinction and gain the title “Dr.” be allowed, posthumously, to retain an assortment of honors? "Not fair," you lament, to place MLK under such a spotlight. Surely his brilliance was visible to everybody, and he made a positive and distinct impact on our nation.

Meanwhile, other students in Ph.D. or Th.D programs exposed as having plagiarized large portions of their doctoral dissertations would expect to be expelled from their respective programs: No honors, no graduation, no doctorate, and deep dishonor.

Is it not right to posthumously strip Martin Luther King, Jr. of the countless awards and distinctions made in his name over the years? Let's get a grip – Bill Clinton, Barack Obama, and, perhaps leading the pack, Joe Biden, committed more than their share of crimes and major transgressions.

The Left can party all night and all day, and the "mainstream" press can censor what they don’t like or offer their propaganda until the skies fall. Long after, the facts will linger.