Jeff Crouere
|
Posted: Feb 28, 2016 12:01 AM
Share   Tweet
The opinions expressed by columnists are their own and do not necessarily represent the views of Townhall.com. 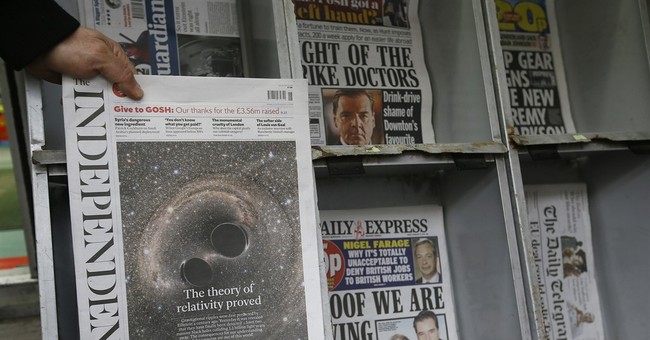 On Wednesday, Ross Douthat, a columnist for the New York Times, set a new low for his liberal publication. As a supposed joke, Douthat tweeted that the best way to stop Donald Trump was to attempt to assassinate him. He said, “Good news, I’ve figured out how the Trump campaign ends,” and included a link to a scene from the 1983 movie, “The Dead Zone,” which featured an attempted assassination attempt on a deranged political candidate who had visions of running for President.

Douthat claims to be a conservative, but he must be suffering from the same Trump derangement syndrome that afflicted the publicationNational Review. This formerly consequential magazine devoted an entire edition to blasting Donald Trump and included articles from the likes of talk show host Glenn Beck, who has become so crazed that he participated in a hunger strike to support Senator Ted Cruz and actually compared Trump supporters to Nazis.

This ridiculous behavior among conservatives is embarrassing and somewhat unusual from the supposedly serious National Review. In contrast, it can be expected from someone as emotionally unhinged as Glenn Beck, who often breaks down on his program and starts crying.

Unlike the conservative media, the New York Times is considered by many to be the citadel of American journalism.  In reality, it is a hard left publication that is losing influence on a daily basis. Clearly, the New York Times and the rest of the old guard mainstream news media treats threats against conservatives and Republicans much differently from threats made against liberals.

If Douthat had made such a threat against President Obama, he would have been arrested and faced charges. If Douthat had made the threat against Hillary Clinton, he would have been immediately fired and been the subject of nationwide ridicule. However, since the victim of this reprehensible attack was Donald Trump, the New York Times did absolutely nothing. In fact, it seems that Douthat was not even reprimanded by the “newspaper of record.”

Of course, Americans have the First Amendment and we thankfully have a free press and cherished rights such as free speech. However, news organizations should also have standards and advocating violence against the leading Republican Party presidential candidate should be unacceptable behavior that is never tolerated.

After the initial tweet caused an intensely negative reaction from Trump supporters, Douthat apologized and removed the offensive comment. Nevertheless, the damage had already been done. Trump is a high profile individual with universal name recognition. He is clearly the most controversial presidential candidate in decades. Fortunately, he has Secret Service protection since he reportedly faces death threats on a regular basis. According to his former aide, Roger Stone, Trump wears a bullet proof vest for protection.

This tweet may give lunatics the encouragement to attempt to harm Trump, who is holding large rallies across the country. No other candidate attracts such crowds, so thanks to a lowlife columnist’s assassination joke, the already difficult job of the Secret Service has been made more difficult.

Since his presidential campaign began in June, Trump has dealt with public threats against his life a number of times. In October, a notorious Mexican drug lord, El Chapo, reportedly put a $100 million bounty on Trump’s head. In December, when Trump called for a halt on Muslim immigration into this country, the Internet exploded with death threats against him.

Of course, it is not unusual for drug lords and terrorists to target U.S. presidential candidates, but it is unprecedented for a New York Times columnist to join the fray. If this liberal newspaper, which has seen a significant decline in readership in recent years, had any credibility left, Douthat, a supposed foreign policy expert who supports Senator Marco Rubio and Governor John Kasich for President, would be looking for a job today.