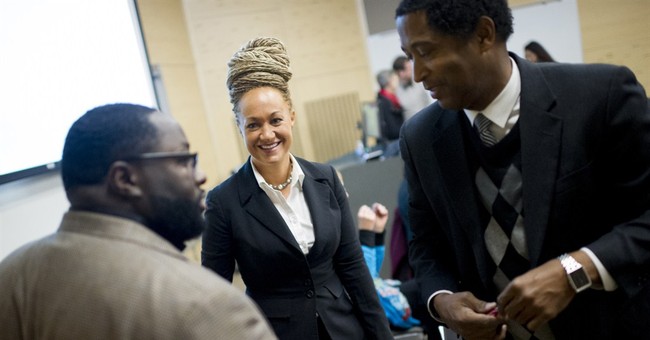 Before the nation had a chance to digest the spectacle of former Olympic star Bruce Jenner transitioning into a female by the name of “Caitlyn,” another pretender has emerged. It seems that the NAACP President of Spokane, Washington is actually, heaven forbid, white. For years, Rachel Dolezal claimed to be an African American, but now her cover has been blown by her own mother, Ruthanne Dolezal, who informed the media that her daughter is indeed white.

In an interview with the Spokesman-Review, Ruthanne Dolezal lamented “It's very sad that Rachel has not just been herself. Her effectiveness in the causes of the African-American community would have been so much more viable, and she would have been more effective if she had just been honest with everybody.”

Rachel Dolezal has been estranged from her real white parents for years. She claims to have been abused by her parents, although they deny the accusations. Their real crime is their skin color and any self-respecting African American NAACP leader cannot be seen with white parents!

This fraudulent civil rights leader was just following the example set by U.S. Senator Elizabeth Warren (D-MA). Prior to being elected to the U.S. Senate, Professor Elizabeth Warren claimed that she was a Native American. This “minority” status allowed her to garner positions at the University of Pennsylvania and Harvard University. When confronted by her use of the minority label, Warren claimed that she used it to meet other Native Americans. Of course, it was really used to advance her career. She parlayed her academic positions into a powerful political office. Of course, it was all built on a deception, but since Warren is a liberal, everything has been forgiven.

Regarding deceptive practices, Dolezal has been quite accomplished. She lied to the Spokane community for years, using her imaginary minority status to land positions in government, academia and with the NAACP. In February, she also claimed to be the victim of hate mail and suspicious nooses left at her homes. The problem with her story is that postal investigators determined that the “hate mail” was not delivered to her post office box, but it was placed there by someone with a key, maybe someone like Dolezal looking for publicity and sympathy. The investigation into the nooses has produced exactly zero suspects, another suspicious story.

Her falsehoods extended to social media where Dolezal posted pictures of her supposed African American father and children. In reality, her father is white and her “children” were in fact her siblings adopted by her white parents. When confronted by a reporter about the misrepresentations, she became so flustered that she left her purse and car keys behind and hid in a clothing store. She realized her dream of being an African American civil rights leader turned into a nightmare of lies and deceit.

Obviously, Dolezal was willing to take these chances because she not only identified with African Americans, but she also realized that being a minority is a ticket to advancement in certain fields. It can lead to career opportunities in academia, government, community activism and of course politics. It obviously worked quite well for not only Warren, but also President Barack Obama, who considers himself African American even though he is half white. Dolezal is not even half black; her white ancestors are from Germany and Czechoslovakia, nowhere near Africa.

Now that her phony background has been exposed, she should lose her various appointments, all based on a fictional African American heritage. While she claims to truly care about helping African Americans, Dolezal is, in essence, no better than Al Sharpton. She is another hustler, lying to those who are looking for leadership in all the wrong places.