Barack and Michelle Obama's Race to the Bottom 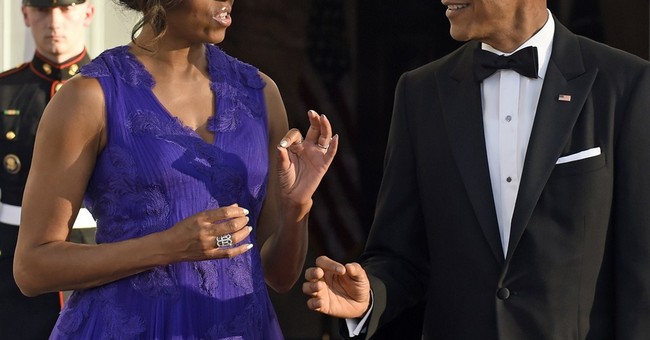 As the Obama administration mercifully begins to wind toward the end of its second term, both the President and the First Lady will continue to distract from their horrible record. Their favorite distraction is to claim racial discrimination exists in this nation and is needs to be corrected through government action.

Even though we are not living in Mississippi in 1964, the President and Mrs. Obama continue to emphasize that America has not progressed enough from the Jim Crow era. They minimize the tremendous progress that African Americans have made in this country and focus on the challenges that remain.

Instead of dealing with the problems they have created, the First Couple engage in a continual discussion about race while employing racially divisive rhetoric. Although it may be skillful and political expedient, it has done tremendous damage to race relations in the nation.

The most recent example occurred last weekend when the First Lady delivered the commencement address at Tuskegee University. Instead of focusing on the goals and aspirations of the graduates, she delivered a speech all about the supposed discrimination she faced. Even though Michelle Obama enjoyed the benefits of affirmative action to attend one of the nation's finest schools, she complained that people looked at her with suspicion. She also grumbled about everything from the way the liberal media covered her to the supposed lack of respect she receives for her accomplishments. The speech was all about Michelle Obama, not the graduates who were allegedly hearing an inspirational message. A commencement speaker should motivate graduates to achieve their goals and give them hope for the future. Instead Michelle Obama showed her narcissism and self absorption. Obviously, she has learned from the master of egoism, her husband.

Even though the President is bi-racial and was supposed to be a unifying force in our country, he has succeeded in polarizing Americans. A recent New York Times poll showed that race relations are at a two decade low in our country. This is no surprise since Barack Obama is always highlighting issues of racial conflict and telling Americans there is racial discord throughout the country.

While Barack and Michelle Obama focus on the race issue, they don't want to talk about the real economic situation. In the Obama years, the economic results have been abysmal as 46 million Americans are now on food stamps and approximately 50 million people are mired in poverty. Although the unemployment rate is at 5.4%, the real employment situation is much worse. There are an astounding 93 million Americans out of the workforce and fewer people are working today than at the beginning of the Obama administration.

The foreign policy achievements of this administration have been non-existent. Iraq is a disaster and the terror group Islamic State is growing in influence. Other supposed success stories like Yemen and Libya are now failed states overrun with terrorists. The Russians have invaded Ukraine and fostered closer ties with the Chinese. In the Middle East, the Israeli government views this administration as unfriendly while the leaders of the Persian Gulf states are unhappy about a President determined to sign a nuclear treaty with a radical Iranian regime. It was no surprise that four of the six leaders invited to the President’s Persian Gulf summit skipped the event.

With poor results at home and abroad, Barack and Michelle Obama will continue to stir the racial pot, distract from their reign of error and lead Americans on a very disturbing race to the bottom on the issue of race relations.

The last 20 months of the Obama administration will be very, very uncomfortable. Let's pray our country will avoid a disastrous racial conflict.