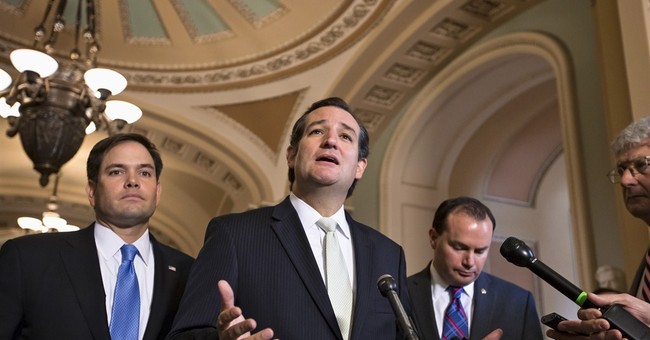 This week the nation has witnessed the emergence of a new star on the political scene: U.S. Senator Ted Cruz (R-TX). He captivated millions of Americans with his amazing 21 hour filibuster against Obamacare.

While the dinosaurs in the media and the U.S. Senate raised objections to his noble crusade, the American people rejoiced that someone was finally standing up for them. Cruz believes politicians need to “listen” to their constituents. This is a foreign concept to most of the politicians in Washington D.C. The establishment Senators, both Democrat and Republican, obviously do not read poll results. For the last four years, on a consistent basis, Americans have registered their strong opposition to Obamacare.

In a new poll by NBC and the Wall Street Journal, Americans by a two-one margin, 45-23 percent, believe that Obamacare will have a negative impact on the country’s health care system. This week, Ted Cruz represented these frustrated Americans who are petrified about a law that will lead to higher insurance premiums, a shortage of medical care and an uncertain future for an industry that comprises 19% of our nation’s economy.

In the meantime, the old guard in the U.S. Senate was furious at Cruz. They were upset that the good old boy system of politics as usual was being challenged.

The old guard in Congress is powerful, connected and very well funded. These incumbents have so much special interest support that it is almost impossible for a challenger to mount a successful campaign.

With the same faces in Washington D.C. it is impossible for our country to change. Thus, we continue to have deficit spending and politics as usual. It is no wonder why Congress is never able to solve any problems. The current cast of characters created the crisis, so they are the least equipped to solve the crisis.

After witnessing the debacle this week, Americans are once again reminded that term limits are desperately needed in Congress. It is obvious that members of Congress who remain in office for too long become unresponsive to their constituents and more interested in protecting their own power base.

With term limits, the country would witness the influx of new and talented public servants who would offer a fresh perspective on Capitol Hill. With the old guard gone, some of our intransient problems may finally be solved.

Since the President is term limited, so should members of Congress. Our Founders never envisioned a member of Congress abusing his power for over five decades. The current system is broken and needs to be fixed.

It is time for an overdue revolution in American politics, a new Contract with America. Term limits are needed now more than ever.
--
Jeff Crouere is a native of New Orleans, LA and he is the host of a Louisiana based program, “Ringside Politics,” which airs at 7:30 p.m. Fri. and 10:00 p.m. Sun. on WLAE-TV 32, a PBS station, and 7 till 11 a.m. weekdays on WGSO 990 AM in New Orleans and the Northshore. For more information, visit his web site at www.ringsidepolitics.com. E-mail him at jeff@ringsidepolitics.com.