“Without a good economy, you cannot have individual liberty.” Scott McNealy, Sun Microsystems CEO. He said, “Most people are like me. They are fiscally conservative and socially liberal. But with Obama, we have trickle up poverty.” He went on to say, (paraphrased) The only outcome of a big government economy is crony capitalism and loss of freedom. Without economic freedom, we cannot have a socially liberal society.

He misses Milton Friedman. Don’t we all. Later today I will try to post a video link from CNBC, but Mr. McNealy echoes the sentiments of many business leaders. Government is way too big. McNealy is supporting Romney. Many in Silicon Valley are supporting Romney. They know that when the boot heel of government is on your neck, you have to submit, or die. (relevant part starts at 2:30)

It was revealing, and I suspect a lot of people in America have the same sentiment.

Man, what a crash in grains. Since the crop report, they have looked like they were in a bear market. Today, it forced an unwinding in the meat trade. Near term months exploded, and deferred went negative as spreaders unwound positions that were going against them.

Peter L Brandt has been calling for a grain crash. We certainly got one.

I just drove from Chicago to Mississippi and back. I was on the Interstate, but was also on some backroads. South of Kankakee-Champaign Illinois, the crop is dead. Entire fields are brown. Bean fields have brown tops on plants. Through Arkansas, farmers were cutting their fields down. Even the deciduous trees already had brown leaves.

Another technician I know posts over at Powerpoints. He thinks the corn crop is so bad we might see $9. I wonder where the private estimates of the crop will come in? If they are below 122, we might see more than $9 corn. ($ZC_F, $CORN). If we do, we might see .72 hogs. ($HE_F). 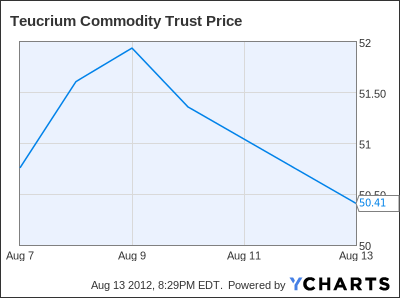