Was perusing the internet and saw some stories about teen unemployment. In Washington DC, it’s over 50%. The average nationwide is 25%.

You might ask, “Why should teens be any different than the rest of us?” Unemployment is high all over.

Teens are different because most of them are employed in minimum wage jobs. Over time, we have raised the minimum wage. The people that politicians are trying to help in general are inner city teens. Here is a chart showing how they have done. Increasing the minimum wage has killed job prospects for inner city teens. It also hurts single mothers and anyone else that wants to try and work a spare job to get some pocket change.

Over time, as we have raised minimum wage teen unemployment has gone up. 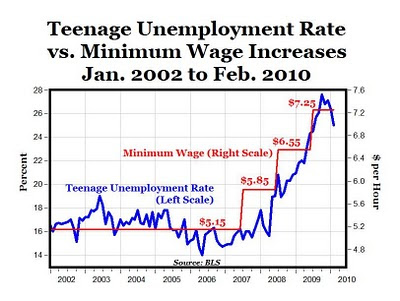 Small business owners can’t afford to hire them. Suppose a teen was going to work two hours a day four days a week. It’s just easier to give those hours to existing employees, or work them yourself.

It’s not just the wage that businesses are paying, but they have to take the time to train them, and integrate them into the business before they truly become productive employees. That holds especially for the much maligned restaurant industry. Operations are key when you are flipping burgers.

Graphically, here is what an increase in the minimum wage looks like. 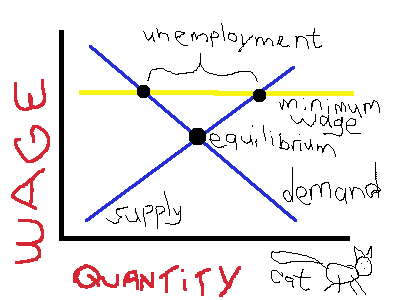 There is a gap between what employers would like to pay, and what they are forced to pay. That’s called “deadweight loss”. At a lower wage employers would hire more people.

Critics howl that you can’t support a family on minimum wage. The answer is you can’t, and no one should expect to do that. It’s simply a way to get some extra walking around money. Kids also learn valuable skills by working. They learn that their effort is valued. They get exposure to some new ideas and processes. They might even learn how to become entrepreneurial if they work for the right person. They might even figure out what they want to do in college.

What some teens are doing is working for cash. They become part of the underground economy. They don’t pay taxes on that income, and they learn a lesson on how to avoid government.

Unions love to raise the minimum wage, because then they try and get their wages increased. Unions really don’t create employment, they actually are labor rationers and create unemployment.

The other problem is the wage rate provides what behavioral economists call an “anchor”. People anchor on that number and say, “if you don’t pay me at least $X.XX, I won’t work.” Then they do everything they can to try and work the system to get government benefits. People get it in their head that they are worth that minimum amount, even when the market wouldn’t pay them that.

Lowering the minimum wage wouldn’t create a race to the bottom. There is such a thing as competition. If the economy grows, businesses would have to compete for employees. They would have to raise their wages to get the employees to work for them.

There are a lot of changes we need to make to help grow our economy and change the pace of the anemic unemployment numbers. If we want to help teens, we ought to drop the minimum wage to $5 per hour, or get rid of it altogether.

Click right here to be the best informed fiscal conservative you know!