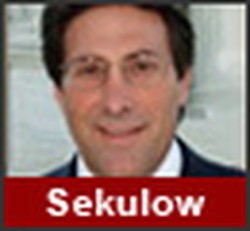 Having argued 12 precedent setting cases before the Supreme Court, Jay Sekulow has helped craft the legal landscape of America’s First Amendment jurisprudence. These landmark cases continue to influence the direction of religious liberties litigation to this day.

In Board of Education v. Mergens, Jay Sekulow paved the way for Bible clubs, prayer groups, and other religious organizations to be able to meet on public school campuses in the same way other student groups were allowed to meet. In Lamb’s Chapel v. Center Moriches School District, Jay Sekulow ensured that churches and other religious groups’ free speech rights would be protected, allowing them to have Equal Access to public facilities. In McConnell v. FEC, Jay Sekulow secured a unanimous decision protecting the constitutional rights of young people to be free to participate in political campaigns, a ruling which reiterated the constitutional principle that students do not “shed their constitutional rights to freedom of speech or expression at the schoolhouse gate.” In Pleasant Grove City v. Summum, cleared the way for governments to accept Ten Commandment monuments and other monuments of their choosing for display on public lands in another unanimous decision from the high Court.

While the ACLJ, under the direction of Jay Sekulow, began with a mission to protect religious liberty in America, the American Center for Law and Justice’s impact can now be felt around the world. Believing that religious liberty is a universal right, Jay Sekulow founded the European Centre for Law and Justice (ECLJ) in Strasbourg, France. Jay Sekulow serves as the Chief Counsel of the ECLJ, with offices in Israel, France, Russia, Pakistan, Zimbabwe, and Kenya.

Many prominent publications have noted Jay Sekulow’s contribution to the area of constitutional law: from the National Law Journal twice naming him one of the “100 Most Influential Lawyers” to the Legal Times naming him one of “The 90 Greatest Washington Lawyers of the Last 30 Years.” Townhall Magazine recognized Jay Sekulow’s unparalleled record of achievement naming him to the “Townhall of Fame,” stating that Jay Sekulow is “one of the top lawyers for religious freedom in the United States.”

Jay Sekulow’s impact extends far beyond the courtroom. His daily radio program, Jay Sekulow Live!, and weekly television show, ACLJ This Week, reaches a vast audience of individuals who fervently support the cause of life and liberty. Jay Sekulow is also consistently sought after for his insight into the most pressing issues of our day and regularly appears on major media outlets on television and in print: from Fox News to the New York Times.

Jay Sekulow has an ongoing commitment to education, having served on the faculty of the Office of Legal Education at the United States Department of Justice, and he currently helps train the next generation of leaders in religious liberties ligation at Regent University in Virginia and Handong University in South Korea.

Jay Sekulow is currently a member of the Board of Trustees for The Supreme Court Historical Society.

Jay Sekulow is a frequent guest on the Sean Hannity Show, learn more.

Aug 23, 2011
Why Palestine's UN Bid for Statehood is a Total Non-Starter

Aug 11, 2011
A Growing Global Concern: Christians in the Crosshairs