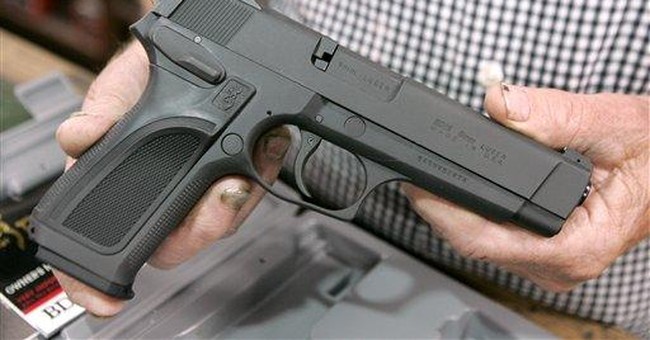 While campaigning for the U.S. Senate and then the presidency, Barack Obama said he believed in the individual right to bear arms.

Those aware of his record and rhetoric thought he might have been referring to his wife’s penchant for sleeveless attire, not the Second Amendment.

During his 2004 run for the Senate, Obama said “I think that the Second Amendment means something. I think that if the government were to confiscate everybody’s guns unilaterally that I think that would be subject to constitutional challenge.” No kidding.

He didn’t say it would be unconstitutional, just “subject to constitutional challenge.” Nor did he express any opposition.

During the presidential campaign, a case challenging Washington D.C.’s draconian gun laws was pending in the U.S. Supreme Court. The laws banned all handgun registrations, prohibited handguns already registered from being carried from room to room in the home without a license, and required all firearms in the home, including rifles and shotguns, to be unloaded and either disassembled or bound by a trigger lock.

In June, the Court released its decision in District of Columbia v. Heller, holding that the laws violate the individual right to keep and bear arms unconnected to service in a militia as secured by the Fourth Amendment. Justice Antonin Scalia, writing for the majority, emphasized that the individual right to bear arms pre-exists, and is independent of, the Constitution:

Putting all of these textual elements together, we find that they guarantee the individual right to possess and carry weapons in case of confrontation. This meaning is strongly confirmed by the historical background of the Second Amendment. We look to this because it has always been widely understood that the Second Amendment, like the First and Fourth Amendments, codified a pre-existing right. The very text of the Second Amendment implicitly recognizes the pre-existence of the right and declares only that it “shall not be infringed.” As we said in United States v. Cruikshank, 92 U. S. 542, 553 (1876), “[t]his is not a right granted by the Constitution. Neither is it in any manner dependent upon that instrument for its existence. The Second amendment declares that it shall not be infringed . . . .”

Obama admitted in a Feb. 11, 2008, interview that he supported the handgun ban, and that it was “constitutional.” On June 26, he said he agreed with the Court’s decision, but added that the right to bear arms is subject to “reasonable regulations.” He never “explained” how an absolute ban on handguns is “reasonable,” or how he can agree with the ruling, which said it was unreasonable. Obama’s inconsistencies are numerous, as John R. Lott Jr has noted.

Obama continued to duck and cover by talking about getting illegal guns off the streets, background checks for children and the mentally ill, and attacking the NRA.

Since his election, finding mention of the Second Amendment on the White House Web site takes about as long as getting to the front of the line at a gun store. What is on the site could be engraved on a .22 shell casing.

It’s far from the high caliber opinion of the Court or those of the Founders who fought for and secured the right:

Despite the Heller ruling and his professed regard for the Amendment, Obama will push legislation to make possession and purchase of guns and ammunition as burdensome as the constitutionally comatose congressional majority will enact.

We should heed the warning of James Madison, “Father of the Constitution”:

“There are more instances of the abridgment of the freedom of the people by gradual and silent encroachments of those in power than by violent and sudden usurpations.”