James Setterlund
|
Posted: Jun 27, 2016 12:05 PM
Share   Tweet
The opinions expressed by columnists are their own and do not necessarily represent the views of Townhall.com. 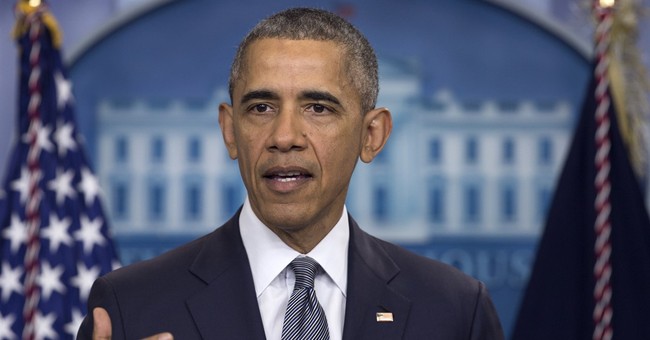 Trending
Through the first two weeks of June, Americans entering the workforce or saving for retirement were dealt back-to-back blows from President Obama’s economic policies.
The slow job growth that many had long anticipated was confirmed in the most recent jobs report. Experts had predicted that the number of jobs created this past May would be around 162,000. Instead, Americans were shocked to see only 38,000 new jobs created.
Coming on the heels of the worst employment numbers since September 2010, the President continued to reinforce his failing policy agenda by using his “pen and phone” approach to notch the tenth veto of his presidency, making it clear that Obama’s legacy comes first over the well-being of hard-working individuals and families.
This veto killed a resolution that would have overturned the Department of Labor’s “fiduciary” rule, which forces financial advisors to conform to the federal government’s definition of “best interest” when dealing with their clients. Consequently, the rule will make it difficult for Americans to open and maintain an IRA or for companies to offer 401(k)s. As a result, investors with small financial portfolios who need guidance the most will be priced out of the marketplace.
Undoubtedly, the Obama administration will continue to rack up vetoes as the president tries to run out the clock and assure his legacy. With an expected 4,000 regulations set to take effect in 2016, and the executive branch unwilling to yield to any meaningful reforms proposed by the legislature, Congress is facing an uphill battle against a pro-regulation administration unrivaled since FDR.
CARTOONS | Al Goodwyn
View Cartoon
Yet, Obama’s regulatory agenda is already a record breaker. In fact, data from the nonpartisan Government Accountability Office show that Obama has issued 593 major rules to date, compared to the previous administration’s 417 by this point in the presidency. Shockingly, this is a 42% increase in rules that will have an economic impact of $100 million or more annually.
Those bearing the brunt of these regulations are families and small businesses. Families have seen a significant drop in their median household income since Obama took office, with small businesses lagging in growth and spending more time and money complying with regulations.
Unfortunately, hard-working Americans can expect this trend to continue as the Obama administration deals yet another blow to those the President claims to be helping with Department of Labor’s new “overtime” rule. The rule mandates that all employees earning below $47,476 a year be eligible for overtime pay. Proponents of the rule, like Labor Secretary Tom Perez, believe “some workers will see more money in their pockets.” The key phrase here is “some workers” with even the most optimistic of projections showing that only 4.2 million employees, less than 4 percent of the private sector workforce, would see even a modest bump in their paycheck.
Last year, three CEOs representing employers in the hotel, restaurant and service industry warned of the unintended consequences this rule would have on salaried employees:
These new regulations would reduce the opportunity for employees to qualify as exempt salaried workers and would lead to less flexibility, fewer management opportunities for employees, greater litigation and no guarantee of higher income.
Though overlooked by proponents, the natural and adverse consequence of the rule will be a reduction in pay and hours for people already in the workforce. Members of Congress agree, which is why Senator Lamar Alexander and Congresswoman Virginia Foxx have sponsored legislation that would overturn this destructive rule.

However, getting the President to approve this legislation rather than issue another veto poses the greatest challenge. Obama has thus far remained quiet toward the legislation as it works its way through Congress, but his latest actions serve as a sobering reminder that Obama – through rule making, vetoes, or any other means available to him – will act with uncompromising authority to solidify his legacy, regardless of its effects on America’s hard-working families.