James Morrone
|
Posted: Mar 15, 2016 12:01 AM
Share   Tweet
The opinions expressed by columnists are their own and do not necessarily represent the views of Townhall.com. 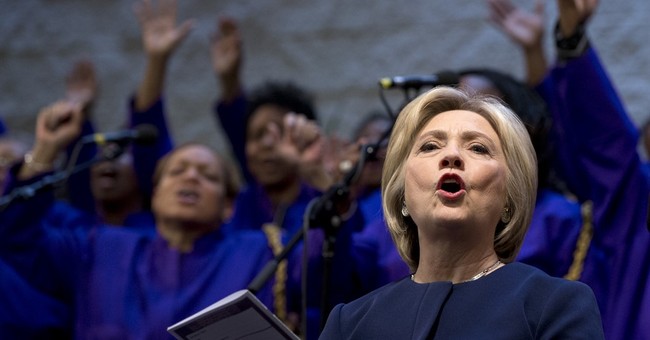 During her time as Secretary of State, Hillary Clinton was an avid proponent of advanced energy recovery methods such as hydraulic fracturing. Yet it now seems her efforts to gain the Democratic Presidential nomination have led Clinton to completely reverse this support, moving towards an anti-energy stance, which could prove damning for her in energy rich swing states.

During the March 6th Democratic debate, in response to a question about hydraulic fracturing, or “fracking” as commonly referred,Clinton laid out a list of anti-energy conditions she’d impose to end the practice. Clinton stated, “By the time we get through all of my conditions, I do not think there will be many places in America where fracking will continue to take place.”

Clinton’s comments will likely be wholly unpopular with voters in energy heavy states, especially swing states like Colorado, Ohio, and Pennsylvania. Each of these states has seen massive economic growth stemming from increased energy production, much of it a product of improved recovery techniques like fracking.

It is no secret these states are incredibly important in both general and primary elections, so Clinton’s threat of “death-by-regulation” to the energy sectors in these states isn’t the smartest campaign tactic to say the least.

For Clinton, Colorado has already proven problematic, with a big loss to Sanders in the primary. Yet given her newfound opposition to fracking and affordable energy, the Centennial State could prove even more problematic in a general election. Over the last decade Colorado’s economy has enjoyed great benefits from oil and gas production, thanks in part to fracking.

In 2014, the oil and gas industry in Colorado added $31.7 billion to the state economy, and created over 100,000 new jobs. One of the biggest beneficiaries of tax revenue generated was the state school system, which received more than $178 million in increased funding. Yet, under an anti-energy Clinton administration, such advances would likely become a thing of the past.

Similar benefits can be seen in Ohio, where energy production led to a 2.1 percent increase in GDP for 2014, bringing it to $583 billion. By 2014 alone, the fracking industry supported over 185,000 jobs in Ohio that paid over $30,000 more than the average wage in the state. A big issue for Clinton is that in the last ten presidential elections, Ohio was a determining factor in picking a president, and her opposition to energy production in the state would jeopardize the livelihood of hundreds of thousands of Ohioans.

In addition to Ohio, Pennsylvania, a key election state, has also seen an economic boom resulting from increased oil and natural gas production thanks in part to fracking. In 2015, development of energy rich shale in Pennsylvania supported well over 70,000 jobs, paying at least $20,000 more than the state’s average wage. Energy development has also brought at least $1 billion in new revenueto the Keystone State, while attracting $4 billion in outside investment.

Much to Clinton’s dismay, the benefits of hydraulic fracturing and oil and gas development in general aren’t limited only to these swing states. In fact the benefits of improved energy recovery are being felt nationwide. Since the “U.S. fracking revolution” occurred, consumers have seen gas bills drop over $13 billion per year, resulting in average savings of $200 per year for households.

Despite Hillary Clinton’s misinformed attacks on affordable energy production, advanced recovery methods such as hydraulic fracturing have created economic booms in energy rich states that have rippled throughout the economy. Clinton’s recent comments attacking affordable energy recovery methods only work to ostracize voters in key states by threatening their economies and the livelihood of millions of hard-working Americans.

It is clear that if elected, Hillary Clinton’s anti-energy and pro-regulation agenda would only work to roll back these energy advancements, killing jobs, reducing GDP, and increasing energy costs.