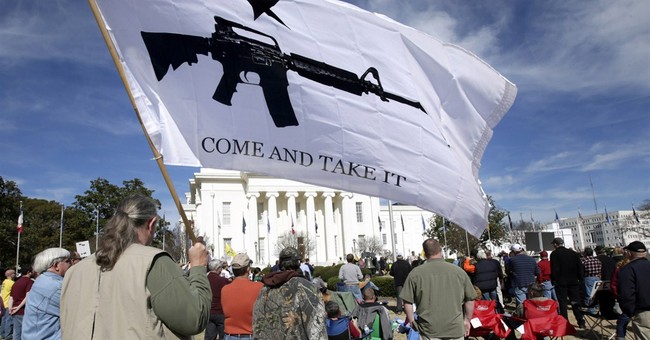 On the surface, this program seems to be a decent deal for the children and parents in a tough economic time in that they trade one toy gun for a chance to win a new bike. The children also learn about gun safety – not toy gun safety – and bicycle safety in case they win the raffle or move to New York and take advantage of Mayor Bloomberg's new bicycle rental program. In either event, the toy gun buyback program clearly reveals another example of public education going above and beyond its job description, while failing to educate children on how to read the labels on their toy guns or learning to count their pretend bullets, they are once again melding in childish affairs.The toy gun buyback program is not about gun education but control.

Charles Hill, the school’s principal, explained, "Playing with toys guns, saying 'I'm going to shoot you,' desensitizes them, so as they get older, it's easier for them to use a real gun." First, there is no way to prove or disprove this statement, so it is equal to propaganda. Propaganda is the process of influencing the attitudes of a community by only presenting one side of the argument, or in this case, using political theater to steal children's toys. Obviously, taking toy guns out the hands of children will not stop gun violence, and education by parents will have the most effect. Toy manufacturers are forced to paint toy guns bright colors, and this point was brought up to the social crusader teaching young children in California with no response to the actual question except that toy guns look real enough. So, putting the actual gun debate aside, and all good intentions of Principal Hull, this gun buyback program is about control because it is using propaganda to change the behavior of children in regards to future actions that may result from the use of toys.

This may sound extreme, but this is not an isolated case. Recently a 5-year-old child who brought a fake looking cap gun onto his Calvert County school bus was suspended for ten days after showing the orange tipped toy gun to a friend. First, the child was questioned for over two hours before his mother was even called and actually wet himself because of the of long interrogation. Other children have also received unwarranted discipline for pointing their fingers in the shape of a gun that were in first and second grade. Another child was suspended for biting a pop tart pastry into the shape of a gun, while in Pennsylvania, a 5-year-old was suspended for a Lego-shaped gun. This over reaction will do nothing to stop gun violence in schools and only shows an attitude of complete contempt for proper education of dangerous firearms. This reaction towards children also reveals a deeper agenda of reeducating children, not on gun safety, but on why guns are truly unnecessary even if they are toys.

When you combine these issues in light of the progressive transformation of public education, it is no wonder why charter and home schooling is thriving. Classical education is at an all time high, and the idea of social progress through public education versus the study of fixed human nature will only over time make public education more and more unattractive. What true education teaches us is that America was founded on the idea that the government was not smarter than the people. This is the present day assumption of not only the American government but also of public education. The reason America was not founded on this principle was that our constitution was set into place to protect us from the powers of government. Our founding fathers also understood that government not only represented the people within the restrictions set into place by the Constitution but also that our government was nothing more than a reflection of the people themselves.