Jacob Sullum
|
Posted: Sep 12, 2018 12:01 AM
Share   Tweet
The opinions expressed by columnists are their own and do not necessarily represent the views of Townhall.com. 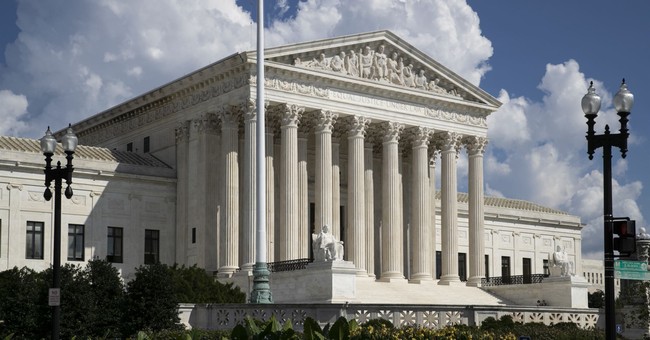 When a stranger forced his way into her apartment, tackled her, punched her repeatedly and tried to cover her mouth with a cloth, Krissy Noble did what she thought was necessary to protect herself and her unborn baby. She grabbed a handgun from the coffee table and shot the man three times. Then she ran to a neighbor's apartment and asked her to call the police.

Although local prosecutors agreed that the shooting was justified, Noble faces charges that could put her behind bars for years, thanks to a marijuana conviction that made it illegal for her to possess firearms. Her case shows how drug prohibition and indiscriminate gun laws conspire to deprive people of the constitutional right to armed self-defense.

The man who came to Noble's door in Fort Smith, Arkansas, on Dec. 7 was Dylan Stancoff, the boyfriend of a woman who had once lived in the apartment with Brendon Tran, now Noble's husband. Noble told police that Stancoff, who apparently had come to recover his girlfriend's possessions, initially knocked on the door, identified himself as Cameron White, and asked for Tran, who wasn't there.

By the time Stancoff came back, Noble had talked to Tran, who said he did not know anyone by the name of Cameron White. Already nervous because of prior break-in attempts, Noble had retrieved Tran's .40-caliber pistol from the bedroom and had it in the living room when Stancoff attacked her.

"It is the opinion of this office that Krissy Lenae Noble was justified in her use of force and that this is a justifiable homicide, which does not merit the filing of criminal charges with regard to the homicidal event," said Sebastian County prosecuting attorney Daniel Shue in a statement issued last month. Noble, who had pleaded guilty in February 2017 to possessing marijuana with intent to deliver, was nevertheless arrested for violating a state law that bars felons from possessing guns.

That offense is a class D felony, punishable by up to six years in prison. Noble, who is 21 and now the mother of a baby boy, may also have to serve time for the marijuana offense, because staying away from guns was a condition of the five-year suspended sentence she received.

Noble told a local TV station she "was in a car with other people when police found drugs inside the car, and since no one claimed them, all inside were charged." But even if the marijuana was hers, there is nothing inherently criminal about possessing cannabis, which is legal for recreational and medical use in 30 U.S. states and Washington, D.C.

Arkansas is hardly unique in treating nonviolent felons as unworthy of gun rights. Most states have similar laws, and the federal government forbids gun possession by cannabis users as well as people convicted of marijuana felonies. Violating that ban is itself a felony, punishable by up to 10 years in prison.

The upshot is that people who have never violated anyone's rights or demonstrated any violent tendencies can go to prison for exercising a fundamental human right guaranteed by the Constitution. That is true even of people who were convicted of acts that are no longer crimes under state law, unless they manage to get their records downgraded or expunged.

Ten years ago, when the Supreme Court recognized that the Second Amendment protects the right to keep guns for self-defense, it said "nothing in our opinion should be taken to cast doubt on longstanding prohibitions on the possession of firearms by felons." Yet if the right to protect oneself against aggressors is "fundamental," as the Court said it has long been considered, if it is "the primary law of nature," as William Blackstone called it and "paramount to all positive forms of government," as Alexander Hamilton thought, it cannot be treated so lightly that proximity to a bag of dried vegetable matter leaves a young pregnant woman defenseless in her own home.