Presidents Are Reckless With Soldiers' Lives

Jacob Sullum
|
Posted: Oct 25, 2017 12:01 AM
Share   Tweet
The opinions expressed by columnists are their own and do not necessarily represent the views of Townhall.com. 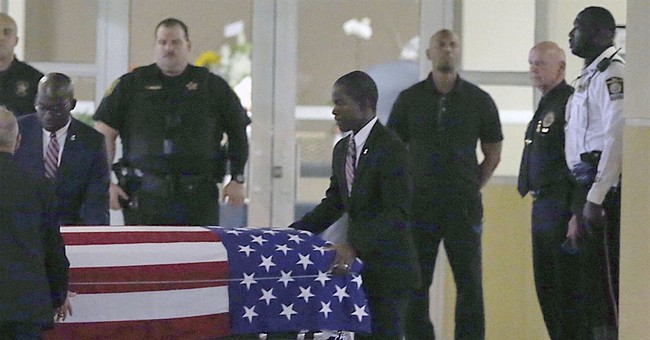 The widow of Sgt. La David Johnson, one of four U.S. soldiers killed in Niger on October 4, says she was "very angry" when Donald Trump told her during a condolence call last week that her husband "knew what he signed up for." The president's critics say that remark was insensitive, but the more important point is that it was not true.

How can any member of the armed forces know what he is signing up for when presidents of both parties deploy the military so promiscuously, usually for reasons that have little or nothing to do with defending the country? The problem is not that Trump is tactless about soldiers' deaths but that he and his predecessors have been reckless with their lives.

"I didn't know there was 1,000 troops in Niger," Sen. Lindsey Graham, R-S.C., a member of the Senate Armed Services Committee, confessed on Sunday. With U.S. Special Forces operating in so many countries -- 138 last year -- it can be hard to keep track.

Last week, Defense Secretary Jim Mattis explained that the U.S. troops in Niger are "supporting the French-led and the African troops, in the campaign to throw ISIS and the terrorists, the radicals, those who foment instability and murder and mayhem, off their stride." He did not mention that a previous U.S. intervention, against Libyan dictator Muammar Gaddafi, had contributed to the instability by sowing chaos in a neighboring country and sending arms and extremists across the border.

Is the mission that killed La David Johnson and three of his comrades, which began nearly five years ago, making Americans safer? Is anyone in the Trump administration or Congress even asking that question?

By now the cost of military inertia should be painfully clear to anyone who is paying attention. The war in Afghanistan -- which, unlike the operation in Niger was initially a response to an attack on the United States -- has dragged on for 16 years now, claiming the lives of more than 2,400 American military personnel.

Luke Coffey, director of the Douglas and Sarah Allison Center for Foreign Policy at the Heritage Foundation, notes that the two main goals of that war -- denying al-Qaida a safe haven and punishing the Taliban regime for harboring terrorists -- were accomplished "by the summer of 2002." Yet Coffey predicts that the United States will have a military presence in Afghanistan for "at least" another 16 years, which he argues is justified by the need to shore up the country's rickety government.

More than 4,500 American service members have died in Iraq since the 2003 invasion, which was based on a purported threat from weapons of mass destruction that did not exist. As the RAND Corporation's Brian Michael Jenkins noted several years ago, "the costly removal of a brutal tyrant who threatened his own citizens and neighboring countries won no applause, earned no gratitude, established no reliable ally and produced no lasting strategic benefit."

These death tolls do not include the thousands of Afghans and Iraqis killed in those wars, the 50,000 or so Americans who were wounded or the cost to U.S. taxpayers, which may ultimately total as much as $6 trillion. These burdens are all the more appalling in light of the fact that the Iraq war from its inception and something like 97 percent of the war in Afghanistan had nothing to do with national defense.

Before he was elected president, Trump decried the senselessness of these wars. "We should have never been in Iraq," he said, while he described the war in Afghanistan as "a total and complete disaster" that "wasted an enormous amount of blood and treasure."

Now that he lives in the White House, Trump is committed to continuing both of those disastrous mistakes. As commander in chief of troops that were active in more than 70 percent of the world's countries last year, he will have many opportunities to make new ones.