Jacob Sullum
|
Posted: May 04, 2016 12:01 AM
Share   Tweet
The opinions expressed by columnists are their own and do not necessarily represent the views of Townhall.com. 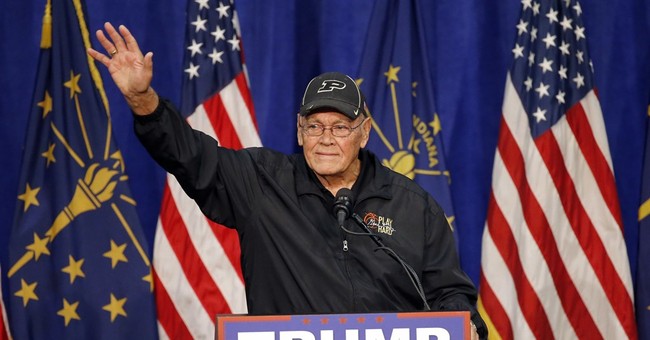 Trending
Now that Donald Trump is the presumptive Republican nominee for president -- a development that no one, including Trump, foresaw a year ago -- it may be a good time to consider what he might do if he beats Hillary Clinton this fall. The "major foreign policy address" that the billionaire developer gave last week suggests he is trying to figure that out along with the rest of us.

Trump's main foreign policy strength is his willingness to tell the truth about the disastrous interventions championed by Republicans as well as Democrats during the last few decades. He has long been critical of the war in Iraq (not quite since the invasion, but almost), and he sees the same pattern playing out in Libya, Syria, and Egypt: The U.S. heedlessly topples a secular dictator, promoting instability and Islamic terrorism.

"Each of these actions [has] helped to throw the region into chaos and [given] ISIS the space it needs to grow and prosper," Trump says. "It all began with the dangerous idea that we could make Western democracies out of countries that had no experience or interest in becoming a Western democracy."

Although Trump is frequently mocked as a foreign policy naif, that analysis displays more wisdom than anything Hillary Clinton has said in her long history of supporting arrogant meddling around the world. I do not know whether a President Trump would keep his promise that "we are getting out of the nation-building business," (you may recall that George W. Bush said something similar in 2000) but his wariness of such projects seems sincere.

Likewise, Trump's criticism of wealthy allies who expect the United States to defend them instead of using their own ample resources to do so -- a point Trump has been making at least since his 2000 book The America We Deserve. Last week he complained that "only four of 28 other [NATO] countries, besides America, are spending the minimum required 2 percent of GDP on defense."

Unfortunately, Trump also believes the United States does not allocate enough money to the military, even though it outstrips the next seven biggest spenders combined. "We will spend what we need to rebuild our military," he says, criticizing post-2010 cuts that followed dramatic increases during the Bush administration.

Trump's commitment to expanding the so-called defense budget is hard to reconcile with his avowed aversion to foreign intervention, his argument that European and Asian allies should pay for their own defense, and his complaint that "we failed to develop a new vision for a new time" after the Cold War. Why would a president who thinks the military should do less want a bigger military?

It might have something to do with Trump's secret plan to defeat ISIS. "Their days are numbered," he says. "I won't tell them where and I won't tell them how." Naturally, he won't tell us either, because "we must as, a nation, be more unpredictable."

Trump also wants to defeat foreigners who are only trying to sell us stuff. "We have a massive trade deficit with China, a deficit we must find a way, quickly, to balance," he said last week. On Sunday he declared that "we can't continue to allow China to rape our country."

That Trump perceives peaceful commerce as a kind of violence is at least as troubling as his view that foreigners who work in our fields, yards, and restaurant kitchens without official permission represent a threat to national security. His notion that a trade "balance" with the world or any particular country is both readily achievable and desirable harks back to the misguided mercantilism that Adam Smith debunked in 1776.

Trump argues that stopping Americans from buying the goods they want will boost the economy, providing tax revenue for his military buildup. And since the purpose of that buildup remains mysterious, we may yet get an actual shooting war along with the trade war Trump seems determined to start.