Why Jeb Bush Can't Be Trusted With an Army: His Reluctance To Criticize His Brother's War Reflects a Dangerous Desire To Forget the Past 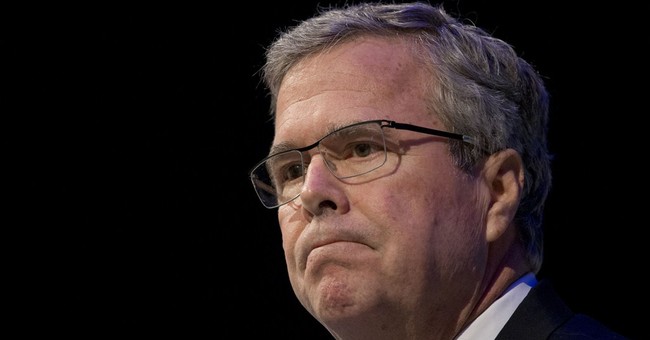 Trending
According to researchers at Brown University's Watson Institute for International Studies, the war in Iraq that George W. Bush started in 2003 has killed about 200,000 people, mostly civilians, and cost American taxpayers more than $2 trillion. That's a pretty big mistake to admit, so it's not surprising that Bush continues to defend the war.

Nor is it surprising that the former president's brother, Jeb Bush, would be reluctant to criticize the Iraq debacle. But while such reticence is understandable for a brother, it is inexcusable for a presidential candidate, who is seeking a job that would put him in a position to make such disastrous mistakes.

Over the course of four days last week, the former Florida governor took four distinct positions on the Iraq war. On Monday, he said he would have supported the invasion even if he knew that Saddam Hussein did not have chemical or biological weapons.

On Tuesday, he said he had misunderstood the question, but declined to express an opinion about the war. On Wednesday, he said that "there is no denying" that "given the power of looking back ... anybody would have made different decisions," but he did not get specific. Finally, on Thursday, Bush said, "I would not have gone into Iraq" without the erroneous intelligence indicating that Saddam had weapons of mass destruction.

Bush's stated reasons for dodging this straightforward question are at least as troubling as the evasiveness itself. "That's a hypothetical," he told talk-radio host Sean Hannity. "To delve into that and not focus on the future," he told reporters in Nevada, "I think is where I need to draw the line."

A presidential campaign, of course, is nothing but a series of hypotheticals about what might happen if voters elect the candidate or (God forbid) his opponent. And although this particular hypothetical focuses on the past, it tells us something important about the future: the circumstances in which the candidate could imagine taking the nation to war.

Bush's brother and other diehard defenders of the Iraq war, such as former Vice President Dick Cheney and former Defense Secretary Donald Rumsfeld, say Saddam's nonexistent weapons of mass destruction were just one reason to invade. He was a murderous tyrant, they say, and the world is better off without him.

But the world is sadly full of murderous tyrants. What supposedly distinguished this one was the threat he posed to the United States -- a threat that proved illusory.

Furthermore, the invasion hardly ushered in an era of peace and stability. Instead, it led to years of violence and chaos in Iraq -- an environment that bred terrorist groups such as the Islamic State in Iraq and Syria (ISIS) -- and removed a regional check against Iran.

Bush also suggested that second-guessing his brother's war would dishonor the memories of the 8,000 American service members and contractors who died in Iraq. "It's very hard for me to say their lives were lost in vain," he said during an appearance in Arizona. "In fact, they weren't."

But they were. Worse, those lives were lost in a war that killed many other people (mainly noncombatants), caused tremendous destruction and arguably made Americans less secure than if Saddam had remained in power.

That may seem like a horrible thing to say, but it's an even more horrible thing to do. That is why war should be waged only in self-defense, in response to clear and direct threats, and with the awareness that unintended consequences are inevitable.

Rand Paul, alone among the Republican presidential contenders, seems to understand that. At a forum in Iowa on Saturday, the Kentucky senator said, "We have to question: Is Iraq more stable or less stable since Hussein is gone? Is there more chaos or less chaos? Is ISIS more of a threat now because of the instability?"

According to Jeb Bush, such concerns are "hypothetical" and unworthy of discussion. That attitude should disqualify him from commanding the country's armed forces.